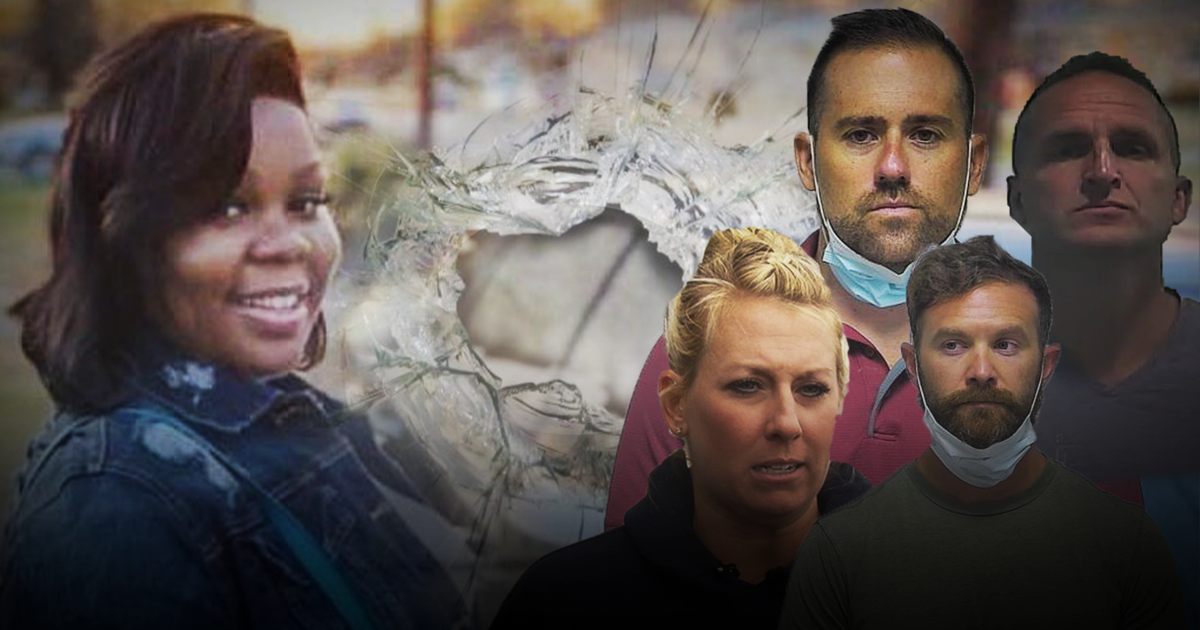 LOUISVILLE, Ky. (WDRB) — The U.S. Department of Justice charged four former and current Louisville police officers with federal crimes in connection with the fatal raid on Breonna Taylor’s home in 2020.

The action caps a federal investigation that looked at how police obtained the search warrant for Taylor’s apartment, something a prior state investigation by Kentucky Attorney General Daniel Cameron’s office did not pursue. Cameron has said that aspect was part of the Justice Department’s work.

The indictments made public Thursday allege that Jaynes and Meany “drafted and approved what they knew was a false affidavit to support a search warrant for Ms. Taylor’s home,” Assistant U.S. Attorney General Kristen Clarke said in Washington. “That false affidavit set in motion events that led to Ms. Taylor’s death when other LMPD officers executed that warrant.”

While Jaynes, Hankison and Meany were federally indicted, Goodlett was “charged on information,” which typically means she has pleaded guilty or plans to. She was charged with one count of conspiracy.

Goodlett has a hearing scheduled in U.S. District Court on Aug. 12. It is unclear if she has retained a defense attorney.

Louisville Metro Police Department Chief Erika Shields said in a statement that she is beginning termination procedures against Meany and Goodlett. Hankison and Jaynes have already been fired.

“While we must refer all questions about this federal investigation to the FBI, it is critical that any illegal or inappropriate actions by law enforcement be addressed comprehensively in order to continue our efforts to build police-community trust,” according to the statement.

Attorney Brian Butler, who represents Meany, declined to comment. Meany is accused of lying to the FBI.

Hankison was the only officer previously charged in the raid. A Jefferson County Circuit Court jury found him not guilty of wanton endangerment charges earlier this year.

Attorney Stew Mathews, who represented Hankison in his state trial, said Hankison turned himself in earlier today but didn’t have any additional information.

Jaynes, Meany and Hankison face a maximum sentence of life in prison. Goodlett is facing up to five years in prison.

In a statement, Louisville Mayor Greg Fischer said that “after two long years of relentless investigations, today’s indictments are a critical step forward in the process toward achieving justice for Breonna Taylor. My thoughts are with Ms. Tamika Palmer, Breonna’s mother, and all those who loved and cared for Breonna.”

“As in every prosecution, our office supports the impartial administration of justice, but it is important that people not conflate what happened today with the state law investigation undertaken by our office,” he said. “Our primary task was to investigate whether the officers who executed the search warrant were criminally responsible for Ms. Taylor’s death under state law.”

“As Dr. King said, the moral arc of the universe is long, but it bends toward justice,” Crump said. “Well, today, it bent toward Breonna Taylor.”

Jaynes asked a judge to approve a search warrant for Taylor’s home a day before the early-morning raid on March 13, 2020. He claimed in an affidavit presented to Jefferson Circuit Judge Mary Shaw that a postal inspector verified that drug suspect Jamarcus Glover, who had dated Taylor, was using Taylor’s home to receive parcels.

Glover was at the center of a narcotics probe by Louisville police. The warrant for Taylor’s home was executed around the same time that police served other warrants on suspected drug houses in the city’s west end — some 10 miles away, Garland noted.

“The affidavit falsely claimed that officers had verified that the target of the alleged drug trafficking operation had received packages at Ms. Taylor’s address,” Garland said. “In fact, defendants Jaynes and Goodlett knew that was not true.”

Tony Gooden, a U.S. postal inspector in Louisville, told WDRB News in May 2020 that Louisville police didn’t confer with his office. He said a different law enforcement agency asked his office in January 2020 to investigate whether any potentially suspicious mail was going to the unit. The local office concluded that there wasn’t.

“There’s no packages of interest going there,” Gooden said.

Garland also accused police of covering up their “unlawful conduct” after Taylor’s death. He said Jaynes and Goodlett “conspired to knowingly falsify an investigative document” after the shooting and “agreed to tell investigators a false story.”

Jaynes’ indictment claims that in April or May 2020 he tried to get an LMPD officer identified as “J.M.” to say that he had previously told Jaynes that Glover had been receiving packages at Taylor’s home. However, “J.M.” had told Jaynes in January of that year that he had no information to support that, according to the indictment.

The indictment says Jaynes and Goodlett provided a “false Investigative Letter” to criminal investigators around May 1, 2020.

Around May 17, Jaynes texted Goodlett that a criminal investigator wanted to meet with him after Gooden’s account refuting the information in the warrant affidavit was reported, according to the indictment. (WDRB published the postal inspector’s remarks on May 15.)

The indictment says Jaynes and Goodlett met the night of May 17 in Jaynes’ garage, where Jaynes allegedly told Goodlett “that they needed to get on the same page because they could both go down for putting false information in the Springfield Drive warrant affidavit.”

During that meeting they “agreed to tell investigators a false story,” the indictment says.

Then, on May 19, Jaynes “falsely claimed” to LMPD Public Integrity Unit investigators that “J.M” told him and Goodlett in January that Glover was receiving packages at Taylor’s apartment, according to the indictment.

The indictment says Goodlett made a similar claim to investigators for the Kentucky Attorney General’s Office in August 2020. And it says Jaynes told FBI investigators in June 2022 that “J.M.” had “made a nonchalant comment” that Glover was receiving “mail or Amazon packages” at the Springfield Drive apartment.

LMPD’s internal investigation found that Louisville officers asked two members of the Shively Police Department to check with a postal inspector. They were told no packages were being sent to Taylor’s home.

In a May 18, 2020, interview with LMPD’s Public Integrity Unit, Shively Police Sgt. Timothy Salyer said he asked Sgt. Jonathan Mattingly, an officer who was shot and injured in the Taylor raid, about the search warrant affidavit after reading it following the shooting.

“Sgt. Mattingly stated he told Detective Jaynes there was no package history at that address,” Salyer told investigators, according to a summary of the interview.

The summary said Mattingly initially reached out to Salyer and Detective Mike Kuzma of the Shively department in mid-January 2020, at Jaynes’ request, to find out about packages going to Taylor’s apartment. Salyer said he was asked because he had a good relationship with a Louisville postal inspector.

In his interview, Salyer told LMPD investigators that he notified Mattingly that “no packages had been received at the address and the post office did not receive any packages either.”

Salyer said he later was contacted by two other LMPD officers — Detectives Mike Nobles and Kelly Hanna — about any packages going to Taylor’s home and said he “told them the same information,” according to the summary.

On April 10, 2020, about a month after Taylor was fatally shot by police, Salyer said he received a text from Jaynes, again asking about any packages going to Taylor’s home.

“(Salyer) told Detective Jaynes there were no packages in months delivered to the address and the location was flagged if any were detected and the Postal Inspector would be notified,” the summary said.

Jaynes also asked if Glover was receiving any “mail matter” and Salyer said he would check.

“Sgt. Sayler (sic) was confused as to why Detective Jaynes contacted him almost a month after the shooting incident inquiring about packages being delivered to the address,” according to the summary.

Nobles said he was confused about the “conflicting information on the affidavit as well,” the summary says.

When asked if she was going to issue a show-cause order as to why Jaynes shouldn’t be held in contempt for providing false information in an affidavit, Shaw said she was “concerned but deferring to the FBI investigation.”

In an interview Thursday evening with WDRB News, Mattingly said officers should’ve immediately admitted the warrant had incorrect information about the Postal Service.

“You should’ve just come forward and said, ‘Hey, we screwed up,'” Mattingly said. “Because if you do things in good faith, it’s backed by the Supreme Court. If you’re doing it in good faith, then you’re OK. So either it wasn’t done in good faith or they just screwed up after the fact and panicked. … I don’t know what it was.”

Jaynes was fired from the Louisville Metro Police Department in January for being untruthful. He appealed to the police merit board, which upheld the termination in June 2021, and then to Jefferson Circuit Court.

A judge also upheld the firing, ruling this June that the “crux of this case is the truthfulness of Mr. Jaynes’ statement in the search warrant affidavit.”

Clay, his attorney, has appealed that ruling.

Hankison was indicted on two counts of deprivation of rights for firing into a bedroom window in Taylor’s apartment that was “covered with blinds and a blackout curtain” after “there was no longer a lawful objective justifying the use of deadly force.”

He also faces charges for shooting through a wall of Taylor’s apartment and into a neighboring unit, endangering three people, including a then-3-year-old boy.

Taylor was inside the apartment with her boyfriend, Kenneth Walker.

LMPD has claimed that while Jaynes obtained a “no-knock” warrant, police repeatedly knocked on Taylor’s door and announced themselves before knocking it in.

Walker has said he never heard police announce themselves and believed the couple was being robbed. He fired a shot, hitting Mattingly in the leg.

No drugs were found in her home.

The  former detectives who fired the shots that struck Taylor — Mattingly and Myles Cosgrove — were not charged because they didn’t know about the false information in the search warrant, Garland said.

After the arrests, Mattingly said in a tweet: “The FBI used tactical teams to raid 4 officer’s/former officer’s homes early this morning over the Breonna Taylor case. It’s political theater. These officers had cooperated. There was no need for this show of force.”

Mattingly later corrected his tweet, saying the FBI did not use tactical teams to make the arrests, and he had been given “bad information.”

This story may be updated.