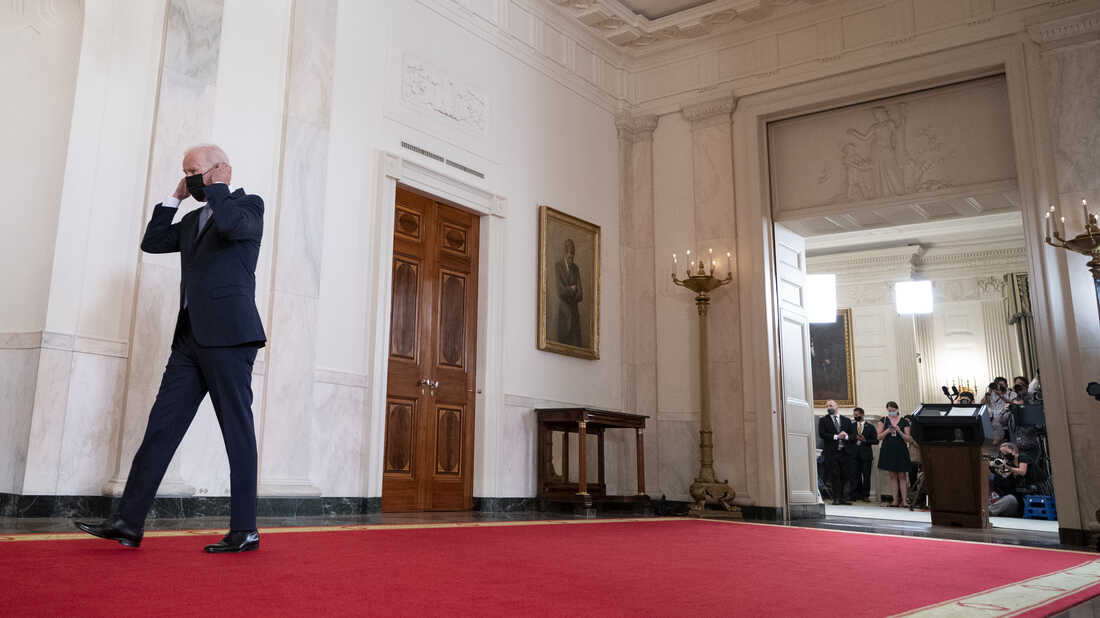 President Biden walks from the podium in the White House on Tuesday after speaking about the end of the war in Afghanistan. Evan Vucci/AP hide caption 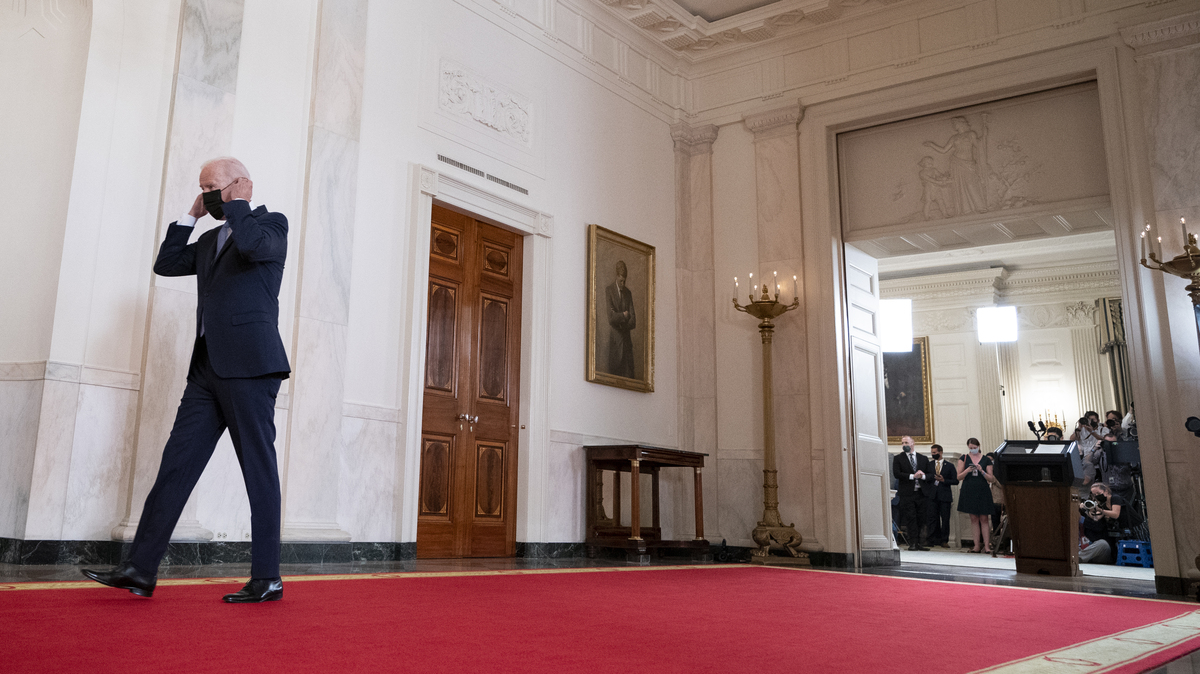 President Biden walks from the podium in the White House on Tuesday after speaking about the end of the war in Afghanistan.

President Biden issued a stern defense Tuesday of his decision to exit Afghanistan. He also hailed the final evacuation — which saw more than 120,000 Americans, Afghans and others airlifted from the country — as an “extraordinary success.”

“My fellow Americans, the war in Afghanistan is now over,” Biden said from the White House. He added, “I refuse to continue a war that was no longer in the service of the vital national interest of our people.”

Americans have largely supported getting out of the country. The 20-year war cost thousands of lives.

How U.S. troops withdrew, however, has drawn its share of criticism. The far-faster-than-expected Taliban takeover created conditions that left the U.S. scrambling to get out. For security, American forces had to rely on a former enemy that once gave cover to the terrorist group that planned the 9/11 attacks.

Amid the chaos, a suicide bombing at the Kabul airport killed 13 U.S. service members and scores of Afghans.

Biden will hope that as the exit sign gets smaller in the rearview mirror, the decision grows more popular.

The ramifications from the U.S. involvement in Afghanistan, and the withdrawal from the country, will likely have long-lasting effects, and they raise lots of questions.

1. What happens to the Americans still in Afghanistan?

In his remarks Tuesday, Biden said there are about 100 to 200 Americans who remain in Afghanistan. Most are dual citizens, he said, who initially didn’t want to leave because of family roots in the country.

Two weeks ago, Biden had promised to stay until all Americans were out.

“If there’s American citizens left,” the president said on ABC News, “we’re going to stay to get them all out.”

But facing terror threats, there was an urgency to stick to the self-imposed end-of-August deadline to get out of Afghanistan. Biden said military, State Department and intelligence officials all urged him to not delay.

“I was not going to extend this forever war,” Biden said, “and I was not extending a forever exit.”

That doesn’t mean the U.S. isn’t working to get those Americans out, the president said.

“For those remaining Americans, there is no deadline,” Biden said. “We remain committed to get them out if they want to come out.”

Now this becomes a tricky diplomatic mission relying to an extent on the goodwill of the Taliban. Does the West have enough leverage to make them continue to get that done? (That’s not to mention whether there’s enough to ensure the safety of women and girls in the country. Many have their doubts, most especially on human rights.)

2. What happens to Afghan refugees and visa holders? 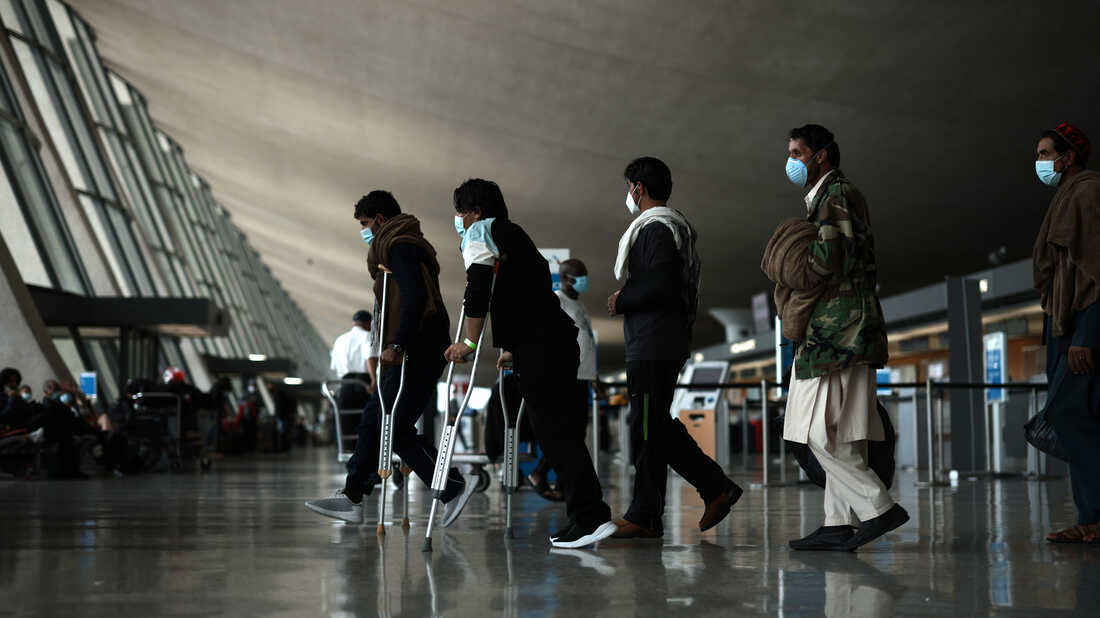 Refugees arrive at Dulles International Airport in Virginia on Tuesday after being evacuated from Kabul following the Taliban takeover of Afghanistan. Anna Moneymaker/Getty Images hide caption 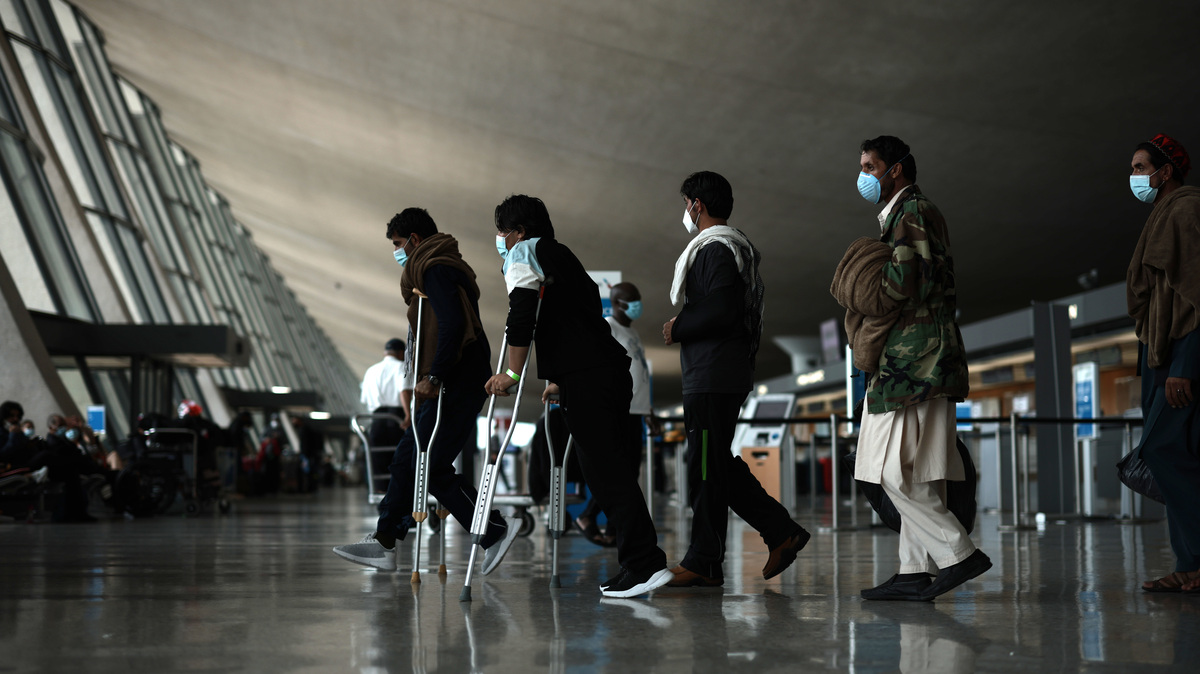 Refugees arrive at Dulles International Airport in Virginia on Tuesday after being evacuated from Kabul following the Taliban takeover of Afghanistan.

About 100,000 evacuees were Afghans, Biden said. Many have already made their way to the United States, but not everyone is happy about it.

“You can be sure the Taliban … didn’t allow the best and brightest to board these evacuation flights,” former President Donald Trump said in a statement, sounding like he did when he first ran for president, criticizing Mexico and immigrants coming through the Southern U.S. border.

“How many terrorists will Joe Biden bring to America? We don’t know!” he added.

Special immigrant visa holders are all screened and subjected to rigorous background checks by the State Department. Many of them fought alongside U.S. troops, and many veterans are the ones leading the charge to get them to the U.S.

“How many American military personnel have to die to evacuate unvetted refugees? Get American citizens out and bring our troops home,” Montana Republican Rep. Matt Rosendale tweeted.

Sen. Thom Tillis of North Carolina, whose office is working to resettle many of the refugees, shot back, telling The Associated Press: “I would say that they need to do their homework.”

Early surveys find Trump and cultural hard-liners are out of step with the American public. But expect the issue to become more polarized and politicized, just as it has in recent history with Syrian refugees and further back after the Vietnam War. In fact, Americans haven’t been very welcoming to refugees through the years, polls have shown.

3. What does the exit mean for Biden’s approach to the world?

Biden noted that just because the U.S. is pulling back its ground troops from Afghanistan doesn’t mean it is shirking from the world.

“As we close 20 years of war and strife and pain and sacrifice, it’s time to look to the future, not the past,” he said.

But that leaves open questions about how Biden wants to approach that new world — and still combat terrorism.

On terrorism, he said the U.S. will not shrink from the effort, including in Afghanistan, but “we just don’t need to fight a ground war to do it.”

The U.S. showed that aerial capability, using drones to strike alleged ISIS-K planners and a vehicle suspected of carrying explosives. (The Obama administration was criticized for its reliance on drones because of heavy civilian casualties in some cases.)

Biden warned ISIS-K, “We are not done with you yet,” but he said there are new threats on the horizon in the form of economic competition from China and cyberattacks and nuclear proliferation with Russia and others.

“The world is changing,” Biden said, adding, “[W]e can do both: fight terrorism and take on new threats that are here now and will continue to be here in the future.”

During his speech, Biden repeated points he has made before about his reasoning for the withdrawal.

That’s something lots of politicians do when a line tests well and they want to repeat it for people who might not have been paying as close attention. That could be why Biden has now rhetorically posed the question of whether the U.S. would have gone into Afghanistan if al-Qaida had planned the 9/11 attacks from a safe haven in Yemen.

But despite the victorious spin Biden put on the withdrawal, he has undoubtedly taken a political hit — at least in the short run.

The chaotic exit put a dent in the aura of competence he has tried to build. The Biden White House has shown it’s adept at dealing with the foreseen, but it’s the unforeseen where presidential legacies are often forged.

Biden probably won’t get away from the shadow of this withdrawal quickly either. There will be congressional investigations — likely at a time when he would rather be talking about domestic legislation like his bipartisan infrastructure bill.

Ultimately, though, challenges like whether the coronavirus pandemic gets under control and the economy continues to strengthen are likely going to be the most critical factors in long-term success or failure for Biden.

5. Does the American public separate the ultimate decision on leaving Afghanistan from the last couple weeks of the war?

Americans have largely grown tired of being involved in Afghanistan, but there’s a fine line in how Americans are viewing what’s happened in Afghanistan — between the war itself and the withdrawal.

A Pew poll of more than 10,000 Americans in the past week found:

While Biden has accepted responsibility for how the withdrawal was handled, he has also been defensive and spread around plenty of blame, particularly at his predecessor for inking a deal with the Taliban that Biden says ultimately boxed him in.

When the aperture is widened, though, Biden’s team hopes Americans will give him more credit for ending the war than blame for the exit — and that what today might look like excuses will tomorrow be seen as history’s reasons.