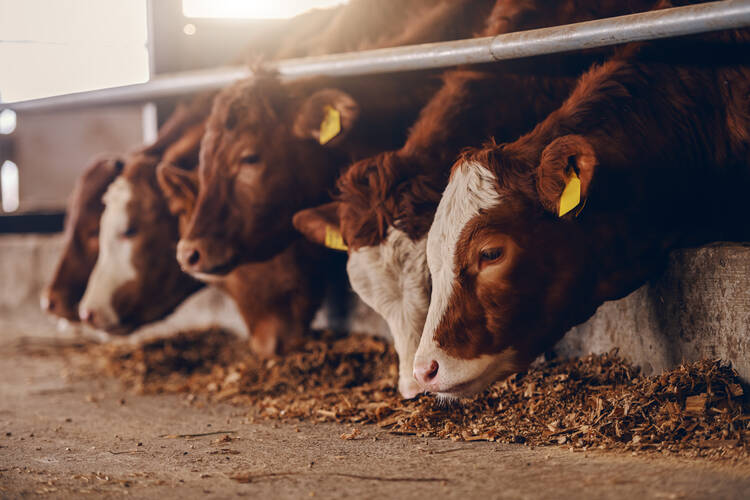 Last fall, the Vatican launched the global grassroots initiative known as the Laudato Si’ Action Platform. Under the leadership of Pope Francis, the plan is to mobilize the world’s 1.2 billion Catholics to support principles of “total sustainability” in the next decade. Parishes, schools, religious communities and other groups have been invited to work together toward seven goals that respond to the urgency of how climate change and planetary degradation are endangering communities around the globe.

Every effort counts here: Even committing to two plant-based meals a week can make a difference.

One key goal of the initiative is the “adoption of sustainable lifestyles,” which invites all of us to choose wisely how we use the earth’s resources. Among the ways for meeting this goal is the adoption of sustainable dietary habits, and specifically a reduction in meat consumption. Research on the impact of meat production makes clear the importance of a more plant-based diet in six distinct ways.

1. Climate change. Animal agriculture is currently the single largest contributor to greenhouse gas emissions, making it one of the largest drivers of climate change. Key to this contribution is the release of methane gas from livestock production: Since 2007, the concentration of methane in the atmosphere has risen precipitously, faster than any other greenhouse gas. In fact, the global warming potential of methane is estimated to be more than 25 times greater than carbon dioxide over a hundred-year period. A leading cause of this increase in methane is the 25 billion livestock (including 21 billion chickens) grazing in pastures and confined in feedlots around the globe, belching methane gas and producing vast amounts of waste that generate additional methane and nitrous oxide.

To keep global warming under 1.5 degrees Celsius—a key goal of the Paris climate agreement—methane emissions need to drop by nearly half by 2030. But this goal is out of sight, experts say, without a cutback in the number of livestock raised for slaughter, and thus a reduction of the global consumption of meat. Every effort counts here: Even committing to two plant-based meals a week can make a difference.

[Related: Is it time for Catholics to stop eating meat?]

2. Deforestation. Livestock currently graze on more than one third of Earth’s ice-free land surface. Much of this land was once forest or grasslands, both of which have a huge potential for capturing and storing carbon dioxide (also known as carbon sequestration). In the Amazon rainforest, clearing land for grazing cattle accounts for 70 percent of recent deforestation, with additional forest being cleared for growing soy to feed livestock. A recent study published in the journal Nature Sustainability estimates that restoring these lands to native ecosystems or forests is a huge “carbon opportunity,” with the potential to sequester quantities of carbon dioxide that could significantly offset decades of global fossil fuel emissions.

3. Human health. Beyond its impact on reversing the ill effects of climate change, a plant-centered diet improves personal health. The overconsumption of meat in Western diets, and increasingly in other countries, increases the risk of obesity, diabetes, cancer, cardiovascular diseases and other chronic diseases. A University of Oxford study from 2016 on “imbalanced” diets—those that are low in fruits and vegetables and high in red and processed meat—estimates that better, plant-rich food choices could save up to 8 million lives by 2050 and lead to substantial savings on health care costs. But this switch will not be easy: Choosing a diet with less meat goes against the dearly held belief among many people that animal protein is crucial for good health—an assumption that has led many Americans to consume almost two times the recommended daily intake of protein of the National Academy of Medicine, 56 grams for men and 46 for women (or 0.12 pounds and 0.10 pounds).

The overconsumption of meat in Western diets, and increasingly in other countries, increases the risk of obesity, diabetes, cancer, cardiovascular diseases and other chronic diseases.

4. Global food availability. The benefits of these dietary changes reach well beyond personal health. Demand for resource-intensive animal foodstuffs limits the global availability of food. Producing a single calorie of beef requires some 10 calories of grain or soy. One study shows that growing plant-based replacements for major animal food-sources can produce two to 20 times as much food similar in nutrition to meat. Replacing all animal-based products in the United States diet with plant-based foods would save enough food to feed some 350 million people.

5. Clean water. Animal agriculture is a major cause of water pollution, contaminating drinking water, causing toxic algae outbreaks in local waterways and killing fish. Slaughterhouses that process and package poultry, beef, pork and other meats dump millions of pounds of harmful substances directly into our nation’s rivers and streams. And phosphorus and nitrogen pollution, which is released in high volumes by slaughterhouses, has created a huge “dead zone” in the Gulf of Mexico, larger than the size of Connecticut, which strips the water of oxygen, forcing fish to flee or suffocate.

[Related: Farms may depend on water — but they are also polluting it.]

6. The well-being of all sentient animals. Humans consume more animals today than ever before. Worldwide, some 80 billion animals are raised and slaughtered for food each year; in the United States alone, about 10 billion are slaughtered, or approximately 1 million per hour. According to one analysis of data from the U.S. Department of Agriculture, the average American consumes some 21,000 land animals in his or her lifetime.

In the name of “efficiency,” most animals raised for human consumption in the United States live out their days in concentrated animal-feeding operations, commonly known as factory farms. Factory farms sacrifice the well-being of animals by confining them to small spaces and putrid conditions and treating each one as a “production unit,” denied their most basic needs. For example, chickens, selectively bred for rapid growth often suffer chronic pain due to bone deformities and joint instability. Referred to as “factories of misery” by one researcher, factory farms are exempt from federal animal welfare laws, and only a few states have begun to ban the worst practices.

[Related: PBS’s ‘All Creatures Great and Small’ is lovely to watch — and deeply untrue]

Thus, the call to embrace a plant-rich diet is an invitation not only to a more sustainable diet but a more compassionate one. Food choices that honor the well-being of all sentient animals can build a world where greater consciousness of interspecies care and reciprocity abounds.

Today, the way we produce and consume food is not just a concern for doctors or economists; it is a defining challenge for humanity. Choosing sustainable, compassionate and health-producing diets, as encouraged by the Laudato Si’ Action Platform, can make a significant contribution to healing a suffering planet while shaping an awareness of how our food choices affect the entire global community.