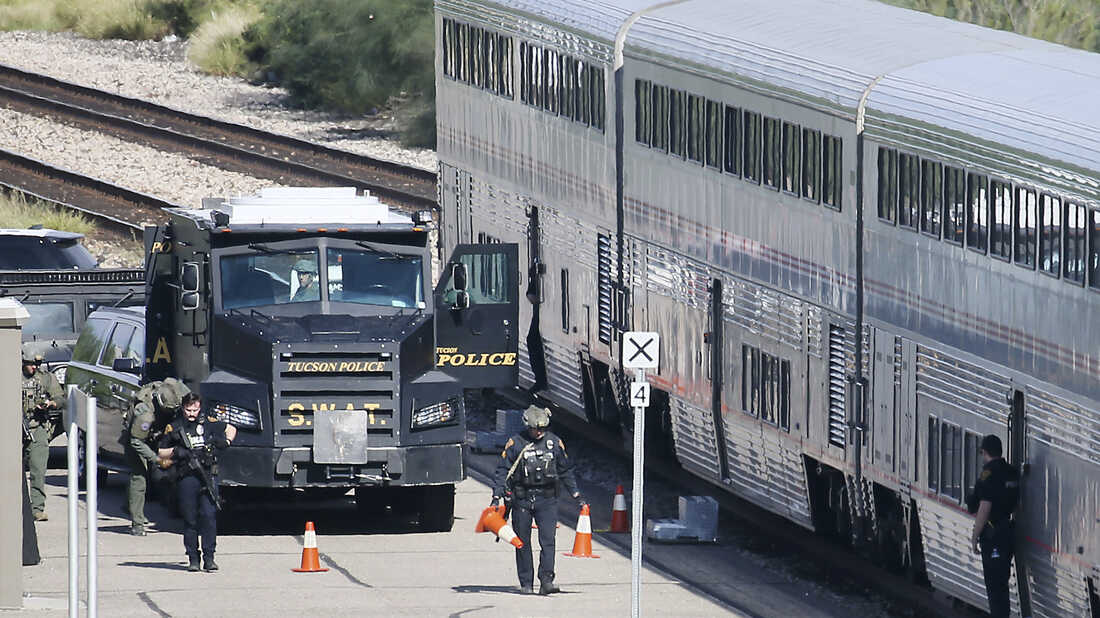 A Tucson Police Department SWAT truck is seen in Tucson, Ariz. A DEA agent was killed when a passenger opened fire during a routine search of an Amtrak train. The suspect also died. Mamta Popat/Arizona Daily Star via AP hide caption 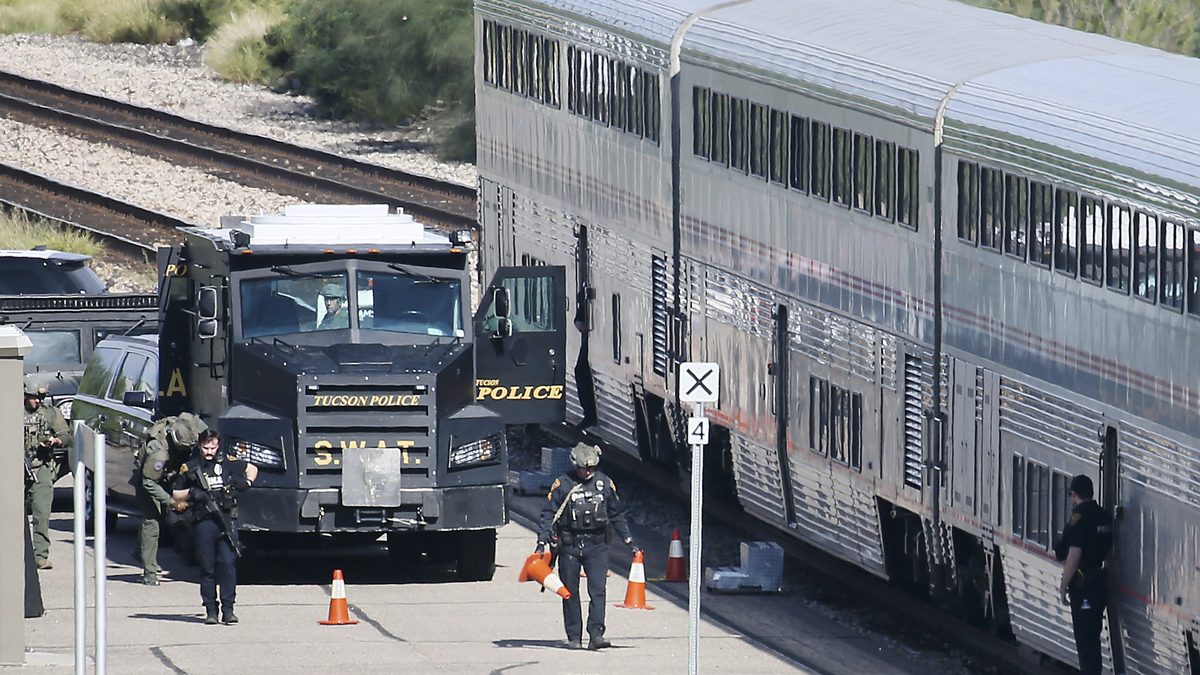 A Tucson Police Department SWAT truck is seen in Tucson, Ariz. A DEA agent was killed when a passenger opened fire during a routine search of an Amtrak train. The suspect also died.

A Drug Enforcement Administration special agent was killed Monday when a passenger, who also died, opened fire as officers were doing a routine inspection for illegal contraband on an Amtrak train in Tucson, Arizona, authorities said. A second agent and a Tucson police officer were wounded.

“It’s very horrific and we’re all just coming to terms with just how terrible a loss this is,” Tucson Police Chief Chris Magnus said. “But I also want to reflect on the really heroic actions of the officers at the scene. They literally ran towards the danger, into the car, where there was an active shooting situation going on.”

Magnus spoke outside the hospital where the wounded agent and Tucson officer had been taken. The agent was listed in critical condition while the officer was in stable condition. He said authorities would not be releasing their names.

The shooting, which sent passengers fleeing, happened just after 8 a.m. on a train stopped at the station in the city’s downtown. A regional task force of DEA agents and Tucson police officers had boarded one of the cars to do a typical check for illegal money, weapons and drugs. It’s a common occurrence at all transit hubs, Magnus said.

Officers were in the middle of detaining a man on the upper level of the double-decker car when a second man pulled out a handgun and began firing. He exchanged several rounds with police and then barricaded himself in a bathroom on the lower level, Magnus said.

He was later found dead inside.

The other suspect has been arrested. It wasn’t immediately known what charges he faces or his relationship to the second man. 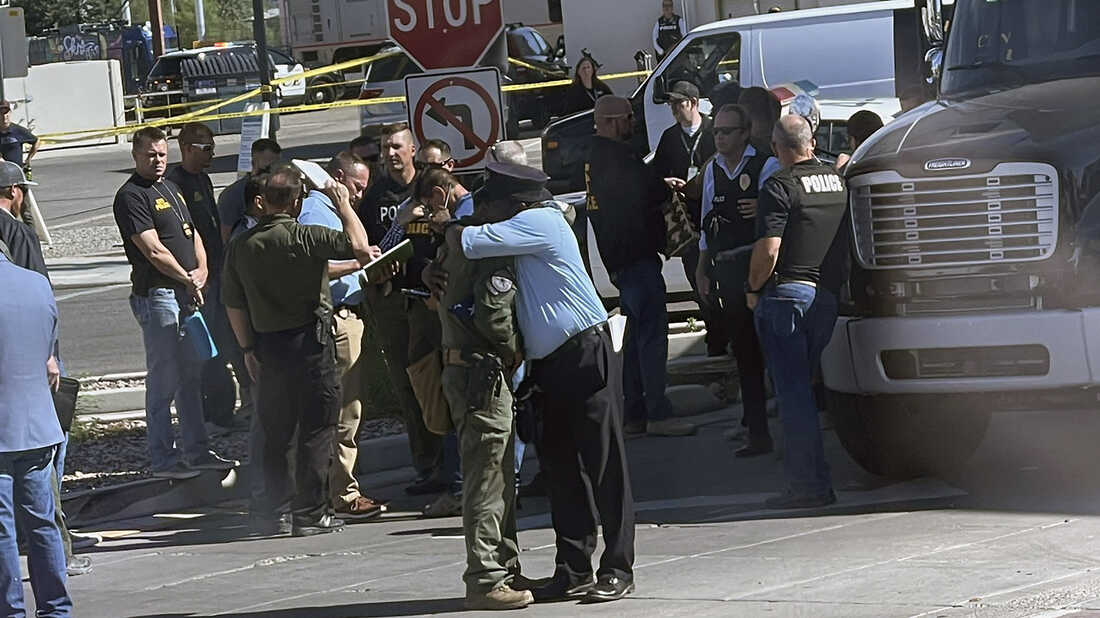 Two officers embrace near the scene of a shooting aboard an Amtrak train in Tucson, Ariz. Evan Courtney/AP hide caption 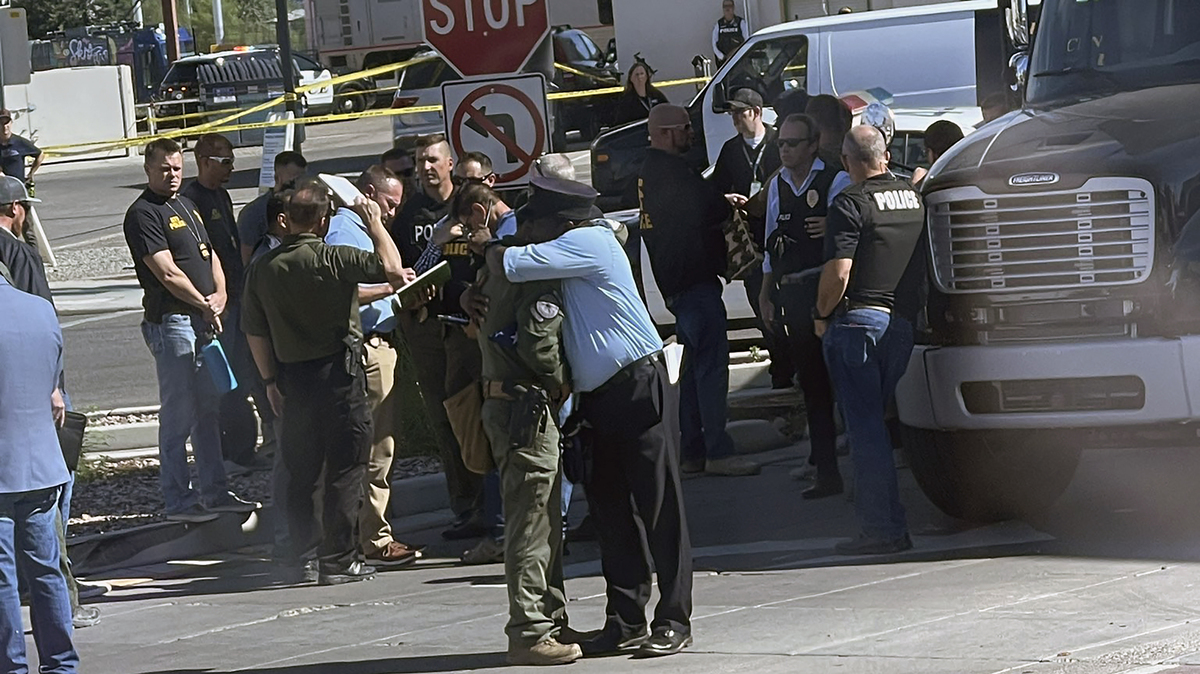 Two officers embrace near the scene of a shooting aboard an Amtrak train in Tucson, Ariz.

Magnus praised Tucson police officers for getting the injured DEA agent off the train and rushing him to the hospital in the back of a patrol car. The hospitalized Tucson officer had been on the platform when he heard the shooting. He was shot when he ran into the car to help.

There were about a dozen other passengers in the car where the shooting occurred.

“I just think it’s kind of incredible here there weren’t other people who were hurt, even though we’re completely so saddened by the loss of the officer,” Magnus said.

Amtrak spokesman Jason Abrams also confirmed there were no reported injuries to the crew or passengers.

The Sunset Limited, Train 2, was traveling from Los Angeles to New Orleans, and arrived at the Tucson station at 7:40 am, Abrams said. There were 137 passengers and 11 crew members, he said. All have been evacuated to the station.

Evan Courtney was in a lounge car when people suddenly came running in yelling: “Shots fired!”

“I grabbed my backpack and ran,” Courtney told The Associated Press via Twitter direct messaging.

He said he huddled with other passengers while looking out the window. He saw several tactical police officers with assault rifles behind barricades. After 15 minutes, “police ran to us and told us to get out of the car and run in the opposite direction.”

Dramatic video taken by a camera at the Southern Arizona Transportation Museum shows some of the shooting.

Multiple shots can be heard from inside a train before a man, who appears to be a security officer with a dog, boards in the middle of the second-to-last car through an open door. Two bystanders back away and then run past a baggage cart, joining four others as they usher each other into the last car and the door slides shut, the video shows.

One shot is heard and the security officer, holding a gun, backs off the train with the dog still on the leash. He runs behind a structure on the train platform as a man appears at the passenger car door, fires three shots toward the fleeing man and dog, and disappears back inside.

The camera belongs to Virtual Railfan, which operates more than 50 cameras livestreaming train operations around the country for train buffs. Kathy Abbott, operations manager, said both Tucson police and Amtrak police have asked for any footage to be made available.

Virtual Railfan’s cameras do capture crime but “maybe not this dramatic,” Abbott said. “This was definitely an adrenaline rush.”

Tucson, home to the University of Arizona, is about 110 miles south of Phoenix.