Imagine a world where the ability to travel on a commercial airliner depends on passing a COVID-19 test or taking a vaccine. If a traveler tests positive or did not receive or refused to take the vaccine, they would be locked out of air travel.

This dystopic future could be the ‘new normal‘ in a matter of weeks. All along, maybe the “conspiracy theorists” who warned of an overreaching system of control by the government were right. 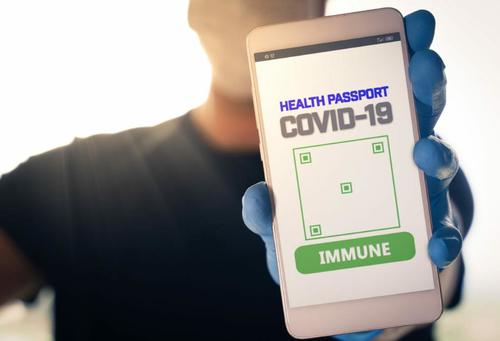 During a Wednesday press conference, the International Air Transport Association (IATA) said they would roll out a new travel app (called Travel Pass) to manage COVID-19 tests and vaccine certifications. IATA is the premier global trade organization for airlines, with 290 members.

Since the early days of the pandemic (read: here & here & here), we’ve discussed “COVID passports,” “immunity passports,” or at least mentioned those who don’t get tested for the virus or vaccinated could face travel restrictions.

From conspiracy theory to conspiracy fact, this appears to be the case as IATA’s new app will be rolled out in March.

Already, Singapore Airlines and twenty other airlines are testing the Travel App. In recent weeks, more airlines, such as American Airlines have expanded the use of immunity passports for international travel.

“The key issue is one of confidence. Passengers need to be confident that the testing they’ve taken is accurate and will allow them to enter the country,” said Vinoop Goel, IATA’s regional director of airports and external relations.

“And then governments need to have the confidence that the tests that the passengers claim to have is one which is accurate and meets their own conditions,” Goel said.

“We are currently working with a number of airlines worldwide and learning from these pilots. And the plan is to go live in March,” he said.

“So basically, we expect to have a fully functional working system over the next few weeks,” he added.

The development of the app suggests airlines and governments have worked together to come up with a global solution to restart the crippled airline industry. Despite the imminent release of the app, IATA expects summer travel to be slow.

So the question we ask readers is if COVID passports could actually backfire on the airline industry? After all, who wants private corporations and governments holding your private health data?

A corporation or government holding private health data could be a deterrence for some travels. Monitoring people’s health erodes privacy, and electronic documentation leaves the data susceptible to hackers.

A shortage of vaccines and or younger generations who are expected to get vaccinated later this year could result in unfair access to air travel. COVID passports appear to be a new form of discrimination.

It comes as no surprise as billionaire and top vaccine pusher Bill Gates, for the last ten months, has been one of the most prominent figures discussing health passports.

After airlines, there is no telling what governments will do with these new health passports – they could be quickly extended to entering grocery stores, attending concerts and sports games, riding public transportation, and or even collecting unemployment.

Former Prime Minister and globalist Tony Blair recently said the “world is moving in this direction,” adding that he couldn’t see another way of this,” while referring to immunity passports.

Blair has previously said that vaccine passports are inevitable and that “It’s going to be a new world altogether.”