A Reflationary Shockwave Is Literally Spreading Across The World’s Oceans

Are central banks about to reap the soaring price whirlwind of the inflation genie they’ve been sowing for the past decadesown?

Earlier today we saw the highest Euro Area core inflation print for 5 years (granted, mostly driven by one-time factors ) in a week where US prices paid in the manufacturing ISM were at 10-year highs. 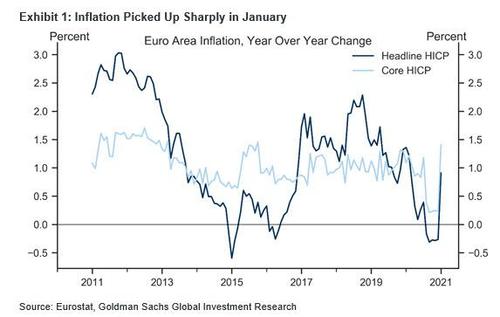 And, as Deutsche Bank’s Jim Reid writes today – picking up on something we have been pounding the table on in the past two months – “the pandemic has created many economic side effects and one of the less-reported news items in recent weeks has been the massive surge in shipping rates”, although to be fair, while others may indeed not be reporting on it, we have been all over it as seen in “New World Record Set For Shipping Rates: $350,000 Per Day“, “The Real Cost Of Ocean Freight Out Of Asia Is Hitting “Unbelievable” Heights“, and so on.

To this point, Reid’s “chart of the day” shows the Shanghai Containerized Freight Index, which represents weekly spot container freight rates (export) from the port of Shanghai, with the current reading more than triple its levels in May last year. As we have noted in the past two months, other freight indices show a similar story. 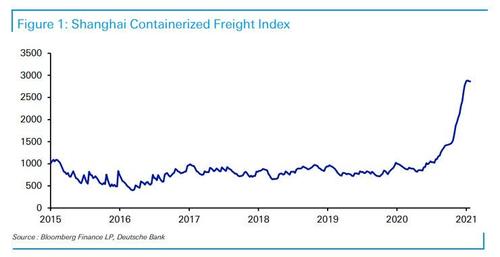 As Reid explains, there are a number of reasons for why this has happened: for one, supply growth has shrunk considerably in recent years, with the 3 major shipping alliances having become far more disciplined around capacity. Furthermore, recent supply chain disruption from a lack of containers (boxes in the wrong place), COVID (lack of staff) and weather (East Coast cold snap) haven’t helped matters either. Then on the demand side, you’ve got the fact that economic growth has come back much stronger than many expected at the height of the pandemic last year, not least with multiple vaccines coming online as we speak.

The bigger question over the medium-to-longer term is whether this will just be a temporary phenomenon or speaks to a broader structural issue. Our equity research analyst in this space, Andy Chu, thinks that given the consolidation in the industry, that even as shipping rates do fall back from their current peaks, they’ll settle down at higher levels compared to their historical norms. On the other hand, some argue that the freight carriers are over-earning right now and won’t be able to resist putting extra capacity into the market and order more ships, in turn, putting downward pressure on prices.

So is the freight index shown above about to tumble, or has it hit a “permanently high plateau”, and – as Reid rhetorically asks – does this rise in shipping costs portend a larger rise in inflation in 2021 as pent-up demand and excess savings are released?

Even if the answer is yes, we are confident that central bankers will promptly come up with some novel CPI measurement that completely masks the fact that importers will have no choice but to pass these costs on to end consumers.