Less than one week after advising Americans that wearing two or even three masks would be ‘more effective’ against the spread of coronavirus, Dr Fauci has done a complete 180 (again) and admitted that there is no data to suggest it will make any difference. 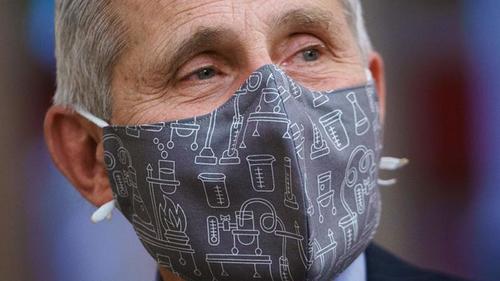 After Fauci made the comments last week, the media began to push the idea that two masks wasn’t enough, and that people need to wear three, or even four masks.

However, during an interview at the weekend, Fauci completely contradicted his own comments from the previous week.

“There’s no data that indicates that that is going to make a difference” pic.twitter.com/ptVivQfuwt

It shouldn’t come as a surprise, given that Fauci has flip-flopped continuously on masks, having originally said that “there’s no reason to be walking around with a mask,” and that they are little more than symbolic.

Later, Fauci fully embraced the masks and stated that they ‘need to stay on’ until everyone is vaccinated.

As we previously highlighted, it went from wearing a mask to now wearing two masks being the best way virtue signal.

Why concern yourself with trivial matters such as breathing when the wearing of multiple face coverings is so effective in delivering social media clout?

Don’t let the fact that there is no evidence masks do anything get in the way of that dopamine hit.