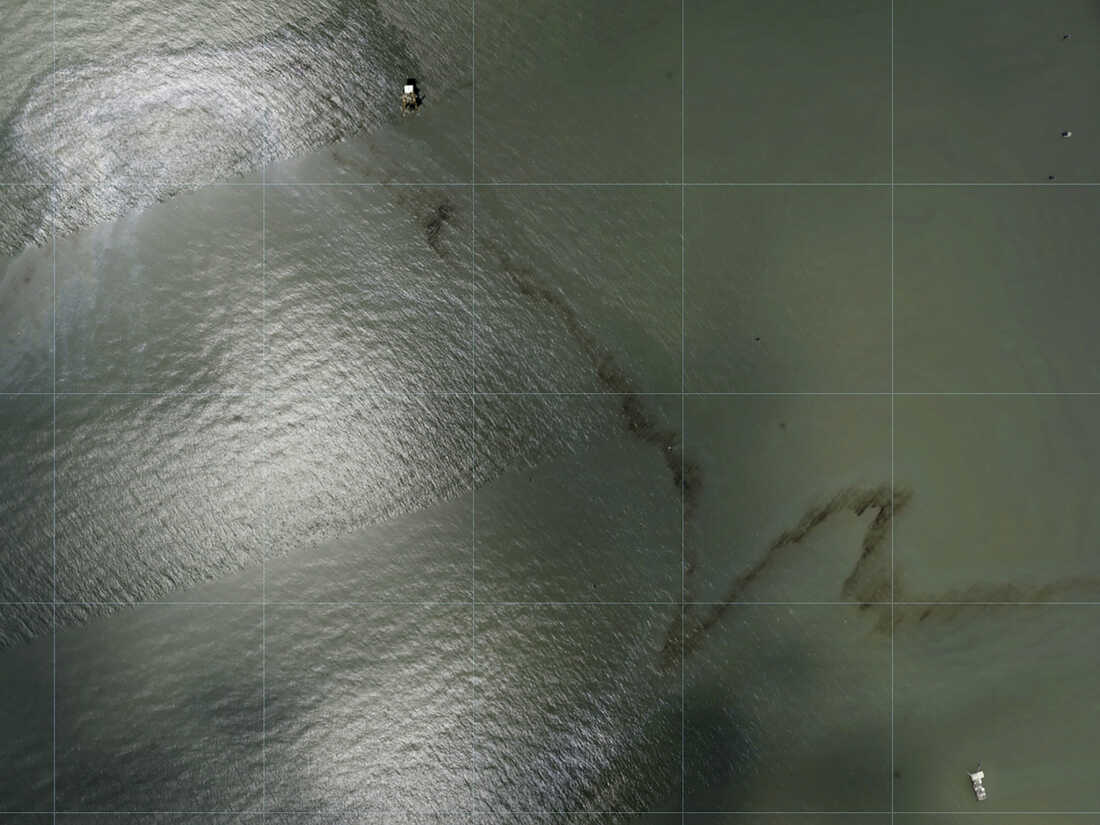 Photos captured by National Oceanic and Atmospheric Administration aircraft Tuesday, Aug. 31, 2021 and reviewed by The Associated Press show a miles long black slick floating in the Gulf of Mexico near a large rig marked with the name Enterprise Offshore Drilling. AP hide caption 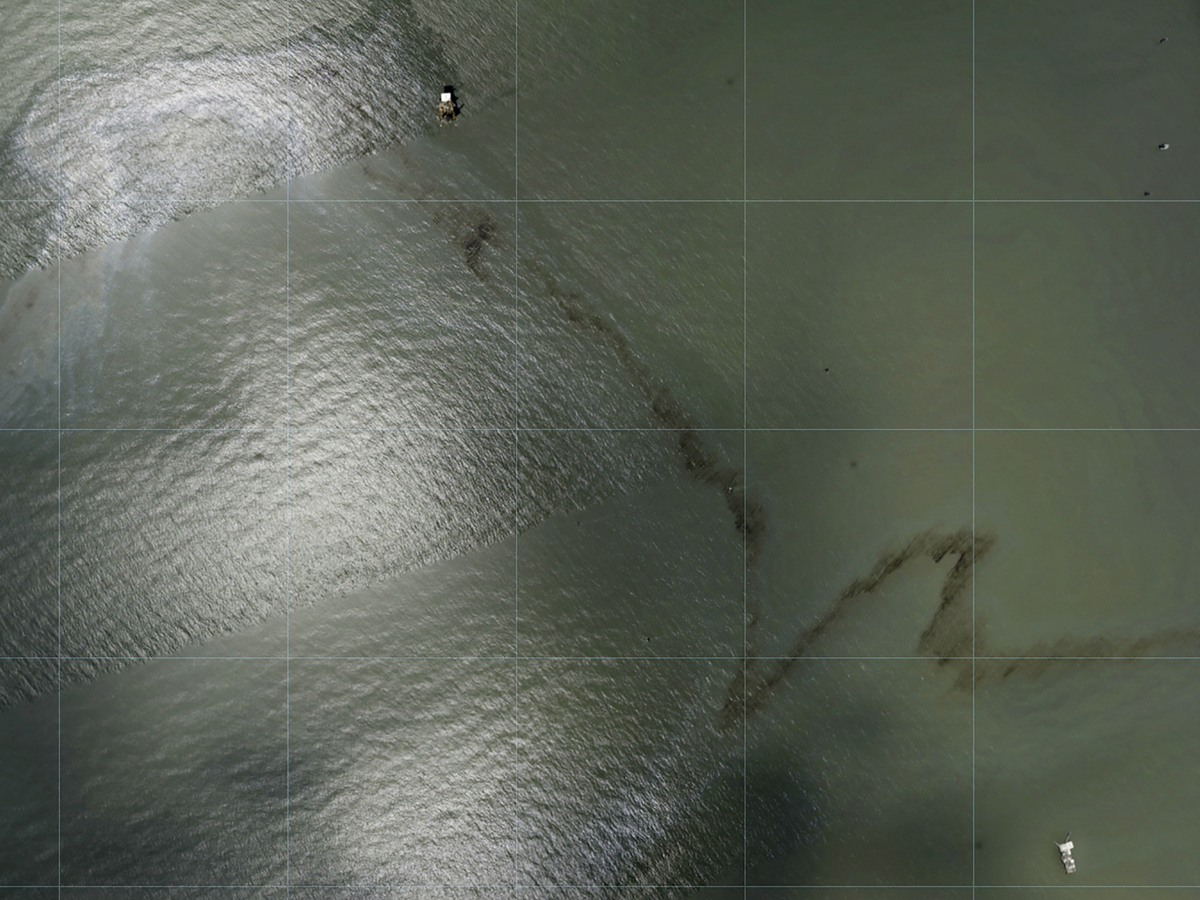 Photos captured by National Oceanic and Atmospheric Administration aircraft Tuesday, Aug. 31, 2021 and reviewed by The Associated Press show a miles long black slick floating in the Gulf of Mexico near a large rig marked with the name Enterprise Offshore Drilling.

PORT FOURCHON, La. (AP) — Photos show what appears to be a miles-long oil slick near an offshore rig in the Gulf of Mexico after Hurricane Ida, according to aerial survey imagery released Wednesday by the National Oceanic and Atmospheric Administration and reviewed by The Associated Press.

The government imagery, along with additional photos taken by the AP from a helicopter Tuesday, also show Louisiana port facilities, oil refineries and shipyards in the storm’s path where the telltale rainbow sheen typical of oil and fuel spills is visible in the water of bays and bayous.

Both state and federal regulators said Wednesday that they had been unable to reach the stricken area, citing challenging conditions in the disaster zone.

The NOAA photos show a black slick floating in the Gulf near a large rig with the name Enterprise Offshore Drilling painted on its helipad. The company, based in Houston, did not respond to requests for comment by phone or email Wednesday. 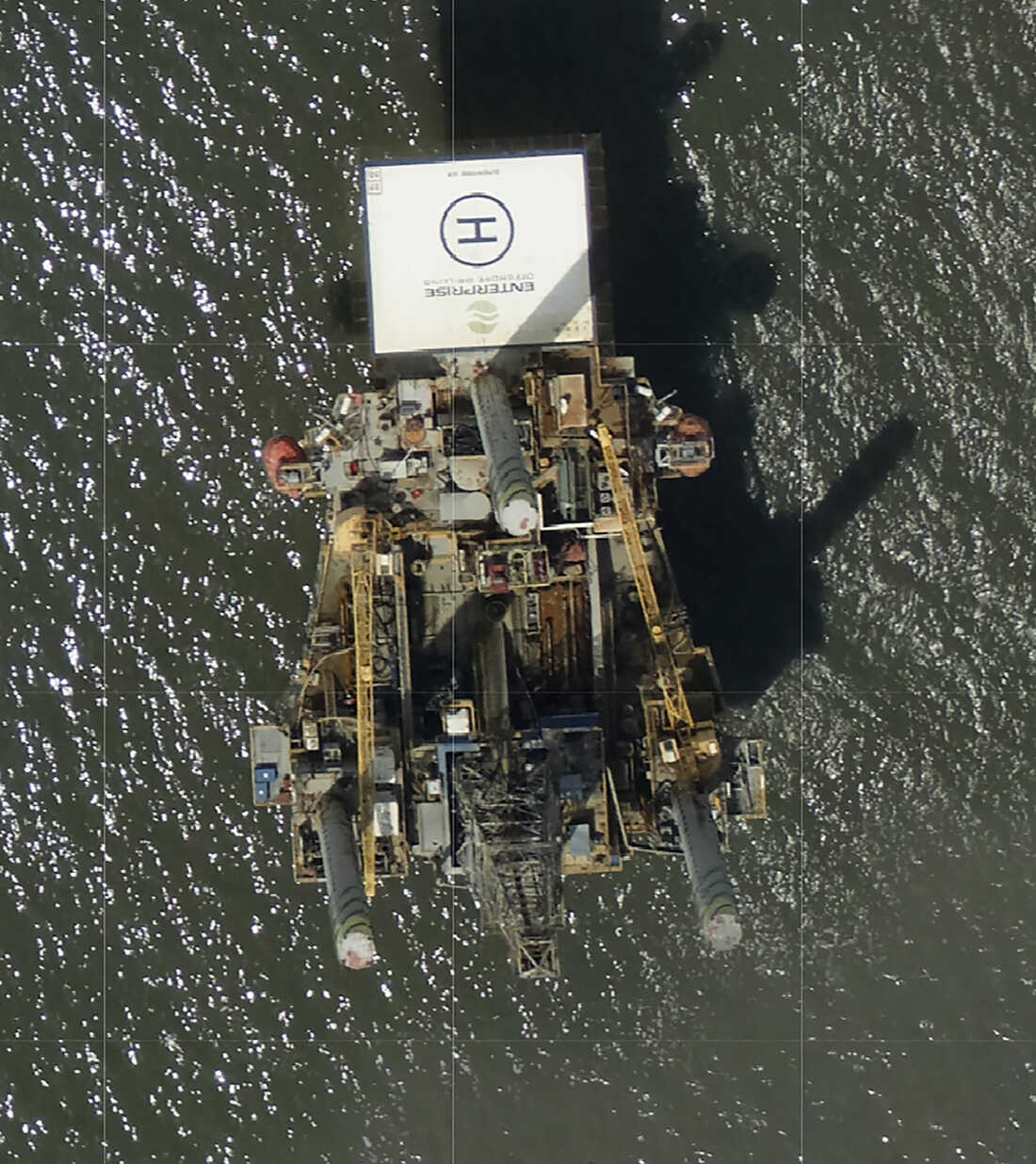 Enterprise Offshore Drilling, based in Houston, did not immediately respond to requests for comment by phone or email on Wednesday. AP hide caption 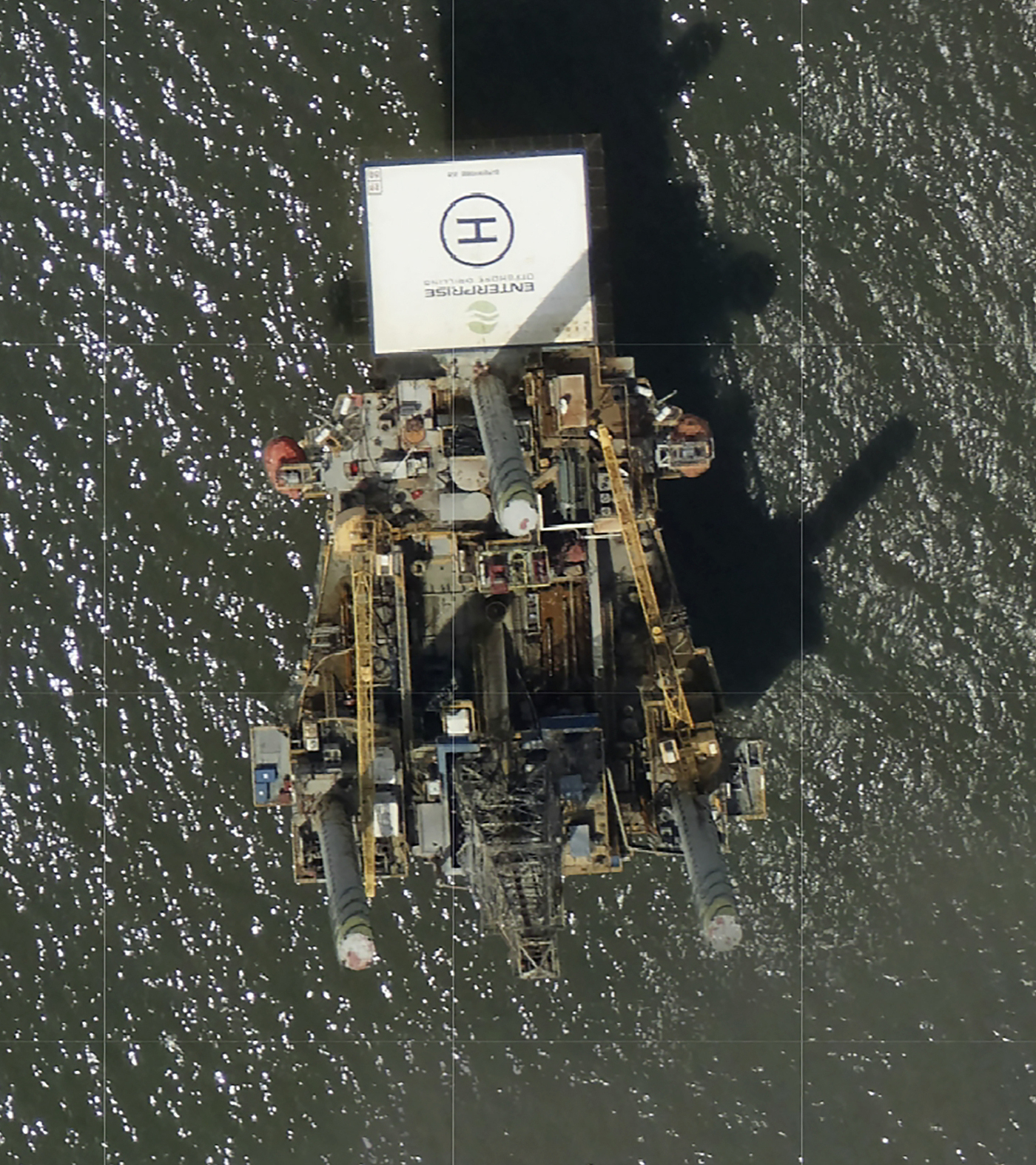 Enterprise Offshore Drilling, based in Houston, did not immediately respond to requests for comment by phone or email on Wednesday.

Aerial photos taken by NOAA on Tuesday also show significant flooding to the massive Phillips 66 Alliance Refinery along the bank of the Mississippi River, just south of New Orleans. In some sections of the refinery, rainbow sheen is visible on the water leading toward the river.

Asked about reports of levee failures near the refinery Monday, Phillips 66 spokesman Bernardo Fallas said there was “some water” in the facility and stressed that operations were shut down in advance of the storm. Asked Tuesday about potential environmental hazards emanating from the facility, Fallas referred a reporter to a statement on the company’s website saying its response is focused “on ensuring the safety and well-being of our employees and our surrounding communities.”

After the AP sent Phillips 66 photos Wednesday showing extensive flooding at its refinery and what appeared to be petroleum in the water, Fallas conceded by email that the company could confirm it had “discovered a sheen of unknown origin in some flooded areas of Alliance Refinery.”

“At this time, the sheen appears to be secured and contained within refinery grounds,” Fallas said Wednesday evening. “Clean-up crews are on site. The incident was reported to the appropriate regulatory agencies upon discovery.”

Fallas did not respond when asked whether the leak was reported after the AP sent the company photos four hours earlier.

All told, seven Louisiana refineries remained shuttered Wednesday. Combined, they account for about 9% of all U.S. refining capacity, according to the U.S. Energy Department. Some refineries on the Mississippi River reported damage to their docks from barges that broke loose during the storm.

Jennah Durant, spokesman for the Environmental Protection Agency, said Wednesday that the agency had received no reports of significant spills or other environmental threats after the Category 4 storm made landfall Sunday at Port Fourchon with 150 mph (240 km/h) winds.

Three days after the storm moved through, Durant said Wednesday that no EPA personnel had yet deployed to the devastated region south of New Orleans. Asked if EPA staff had been reviewing the aerial photos taken by federal aircraft over the disaster zone, Durant said the imagery had not been provided to the agency.

The aerial imagery reviewed by the AP is readily available to the public on the NOAA website. 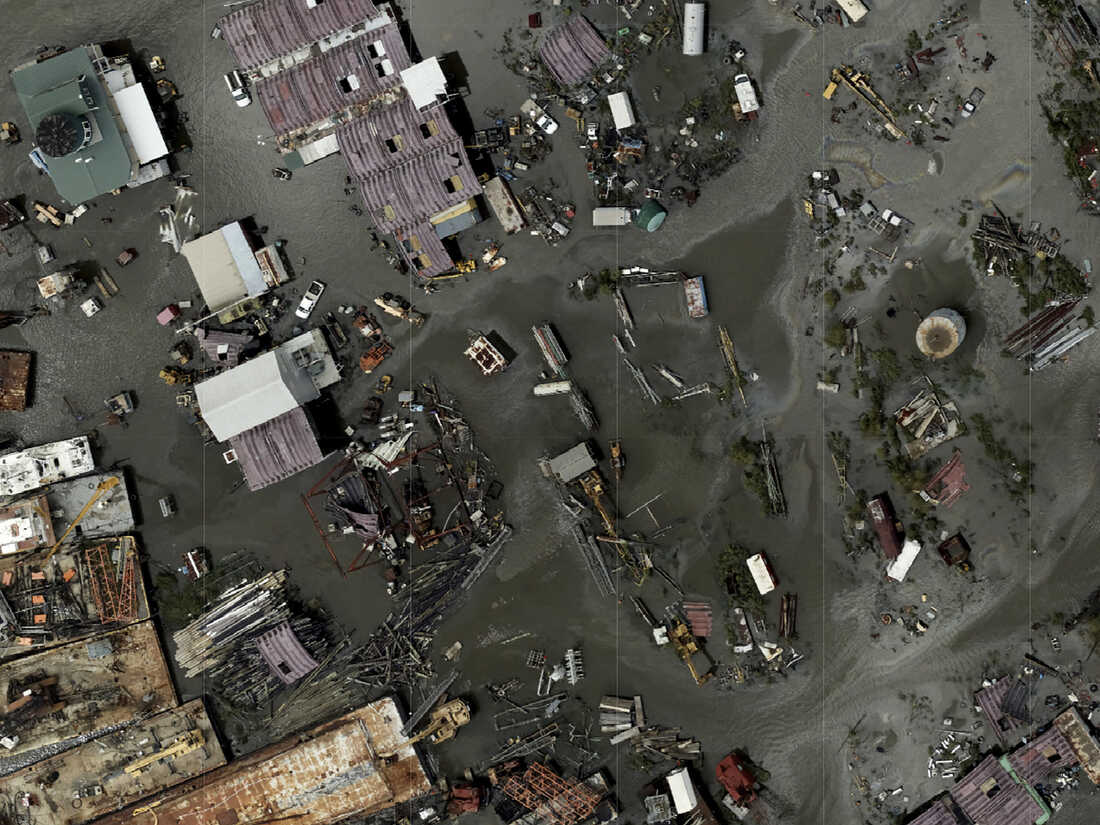 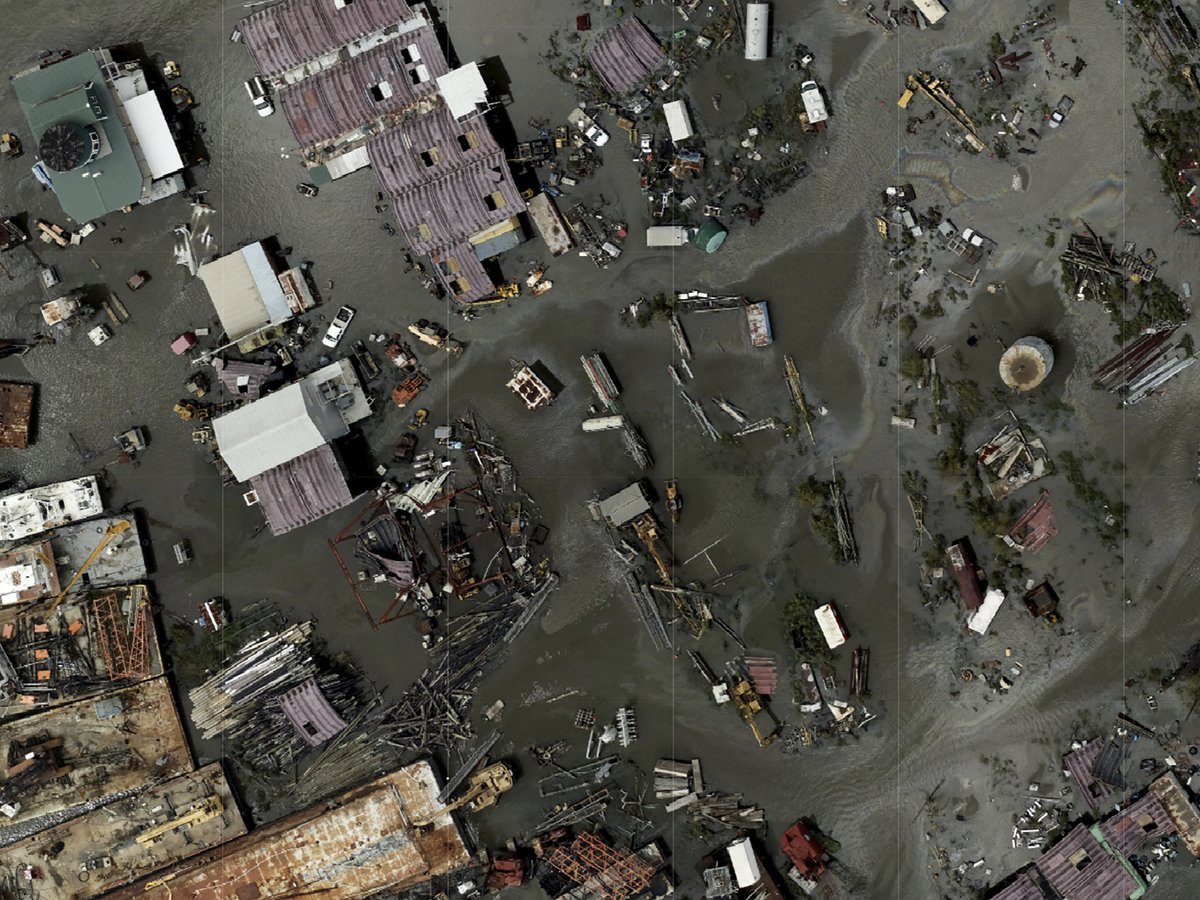 After the AP sent photos of the oil slick to EPA on Wednesday, agency press secretary Nick Conger said the National Response Center hotline operated by the U.S. Coast Guard had received 26 calls reporting leaks or spills in the storm zone but none had warranted an EPA response.

Conger reiterated that any person or organization responsible for a sizable release or spill of pollutants is required to notify the federal government.

The AP also provided photos of the oil slick to the Louisiana Department of Natural Resources, which regulates offshore drilling in state waters. Spokesman Patrick Courreges confirmed the agency had received an informal report of petroleum sheen in the waters south of Port Fourchon but said regulators “currently don’t have capabilities to get out there yet.”

The U.S. Bureau of Safety and Environmental Enforcement, which regulates offshore oil and gas platforms, announced before the hurricane arrived that about half of the 560 staffed rigs in the Gulf had been evacuated. Those crews had only started to trickle back out by Wednesday and it was unclear whether the Enterprise Offshore rig was staffed.

The bureau’s public affairs staff did not respond Wednesday after the AP sent photos of the black slick in the Gulf and asked if there were any reports of a spill.

Both state and federal environmental regulators said the emergency response to Ida had been hampered by blocked roads, washed-out bridges, electrical outages and a lack of communications. Both telephone landlines and mobile phone service in much of the region remained offline Wednesday.

“I think most agencies are kind of caught up in the whole ‘fog of war’ thing at the moment, with far more places we need to be than we can be,” Courreges wrote in an email. “It’s not as easy to respond to things right now.”

Port Fourchon, which took a direct hit from the storm, is the primary service hub for hundreds of oil and gas rigs offshore. The port also contains oil terminals and pipelines that account for about 90% of the oil and gas production from the Gulf.

Photos taken by the AP from a chartered helicopter Tuesday, as well as the NOAA imagery, show extensive damage to the sprawling facility, including sunken vessels, collapsed structures and more than a dozen large overturned fuel storage tanks.

Ida’s winds, equivalent to an EF3 tornado, peeled the roofs off large steel buildings in the harbor and toppled metal light poles. Trucks, cranes and shipping containers were piled into jumbled heaps.

Chett Chiasson, the executive director of Greater Lafourche Port Commission, told the AP late Tuesday that the companies based at Port Fourchon were entering what would likely be a lengthy recovery phase. A top priority, he said, will be clearing roads and removing sunken vessels so boats can safely navigate the harbor.