After 100 attacks on Catholic sites since 2020, bishops say ‘acts of hate’ must stop 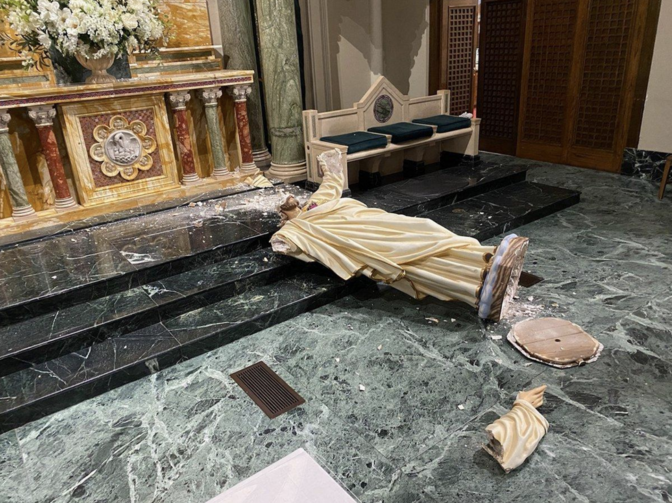 WASHINGTON (CNS) — The Oct. 10 vandalization of Denver’s cathedral basilica that resulted in satanic and other “hateful graffiti” being scrawled on its doors and at least one statue brought to 100 the number of incidents of arson, vandalism and other destruction that have taken place at Catholic sites across the United States since May 2020.

That month the U.S. Conference of Catholic Bishops’ Committee for Religious Liberty began tracking such incidents, according to an Oct. 14 USCCB news release.

“These incidents of vandalism have ranged from the tragic to the obscene, from the transparent to the inexplicable,” the chairmen of the USCCB’s religious liberty and domestic policy committees said in a joint statement included in the release.

“These incidents of vandalism have ranged from the tragic to the obscene, from the transparent to the inexplicable.”

“There remains much we do not know about this phenomenon, but at a minimum, they underscore that our society is in sore need of God’s grace,” they said, calling on the nation’s elected officials “to step forward and condemn these attacks.”

“Where the motive was retribution for some past fault of ours, we must reconcile; where misunderstanding of our teachings has caused anger toward us, we must offer clarity; but this destruction must stop. This is not the way,” they said.

“We thank our law enforcement for investigating these incidents and taking appropriate steps to prevent further harm,” Cardinal Dolan and Archbishop Coakley said. “We appeal to community members for help as well. These are not mere property crimes — this is the degradation of visible representations of our Catholic faith. These are acts of hate.”

In a July 2020 joint statement, Archbishop Coakley and Archbishop Thomas G. Wenski of Miami, then acting chairman of the religious liberty committee decried the growing number of incidents of church vandalism.

“Whether those who committed these acts were troubled individuals crying out for help or agents of hate seeking to intimidate, the attacks are signs of a society in need of healing,” the two archbishops said.

“These are not mere property crimes — this is the degradation of visible representations of our Catholic faith. These are acts of hate.”

“In those incidents where human actions are clear, the motives still are not. As we strain to understand the destruction of these holy symbols of selfless love and devotion, we pray for any who have caused it, and we remain vigilant against more of it,” they said.

“Our nation finds itself in an extraordinary hour of cultural conflict,” they added. “The path forward must be through the compassion and understanding practiced and taught by Jesus and his Holy Mother. Let us contemplate, rather than destroy, images of these examples of God’s love. Following the example of Our Lord, we respond to confusion with understanding and to hatred with love.”

These incidents have ranged from a man crashing his van through the doors of a Catholic church in the Diocese of Orlando, Florida, and setting the interior ablaze, to a St. Junípero Serra statue outside Mission San Rafael in San Rafael, California, in the Archdiocese of San Francisco, being desecrated with red paint and toppled, leaving just the saint’s feet in place.

In response to such attacks, the Committee for Religious Liberty launched the “Beauty Heals” project featuring videos from various dioceses discussing the significance of sacred art.

At least 10 videos are available on YouTube; a link to the play list of all the videos can be found at https://bit.ly/3peNq3o.

“Whether those who committed these acts were troubled individuals crying out for help or agents of hate seeking to intimidate, the attacks are signs of a society in need of healing.”

In a June 1, 2021, letter to the respective chairs and ranking members of the Appropriation Committee in the House and Senate, the USCCB’s Committee for Religious Liberty joined with several other faith groups calling for more funding for appropriations for the Federal Emergency Management Agency’s Nonprofit Security Grant Program in fiscal year 2022.

The text of the letter can be found at https://bit.ly/3n6Rz6t.

“As organizations representing Jewish, Muslim, Sikh, Catholic, Episcopal, Evangelical, Lutheran, Protestant, Seventh-day Adventist, and other Christian and communities of faith across the United States, we believe that all people ought to be free from fear when gathering for religious worship and service,” they wrote, urging more funds for the FEMA grant program.

The grants provide funds for “target hardening and other physical security enhancements and activities” for, as the letter stated, “at-risk nonprofits from urban settings to suburban neighborhoods and rural communities, including houses of worship, religious schools, community centers and other charities.”

“There is a critical need and urgency for these grants,” the faith groups said. “Our sacred spaces have been desecrated, and our faithful murdered.”

In a 20-year period starting in mid-1999, there were shootings at an estimated 19 houses of worship resulting in fatalities.