Authored by Robert Merry via TheAmericanConservative.com,

Probably the most profound geopolitical development of the Twentieth Century was the rise of America as the world’s preeminent power during and after World War II. We’re still living in what Henry Luce called the American Century some eighty years after the publisher proclaimed its inception. Historians have put forth various interpretations for how and why this happened: that America was always an irrepressible nation whose expansionist impulses presaged its hegemonic ambitions; that with all of its resources and power, the country had no choice but to embrace the challenge of global stability.

Now Stephen Wertheim, of the Quincy Institute and Columbia University, propounds a provocative new thesis: that the hegemonic temptation was the product of a coterie of strategic planners from the American foreign policy elite who crafted the notion and sold it to the country by distorting America’s distinct and “foundational” philosophy of internationalism. 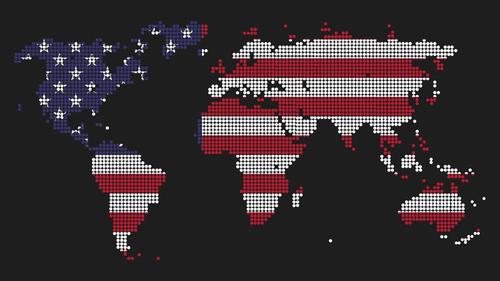 There’s some excellent history here as Wertheim traces the perceptions and recommendations of prominent thinkers struggling to keep up with a world in flux. No sooner would they craft a grand strategy for the future they foresaw than the perceived future would be washed away by powerful new developments. Ultimately they concluded that their options narrowed to a single vision: world primacy.

“Six years after global supremacy was all but inconceivable,” writes Wertheim, “it was now indisputable.”

Wertheim goes awry a bit, though, in tracing the broad sweep of U.S. international relations from George Washington to Franklin Roosevelt. His interpretation elides significant elements of that rich story while interpreting others in questionable ways.

In Werthheim’s view, America was born as an internationalist nation, “promising and incarnating a world governed by reason and rules, not force and whim.” George Washington’s famous farewell call for America to avoid “entangling alliances” was actually a broader admonition against engaging in any form of power politics in the world. That concept, “premised on the ability of peaceful interaction to replace clashing politics,” became a central element of the American ethos.

Ultimately it found expression in the Wilsonian enthusiasm that emerged most powerfully during World War I, when intellectuals and politicians (led by Wilson himself) formulated the concept of eliminating war through disarmament, marshalled of antiwar public opinion, and created global organizations such as Wilson’s cherished League of Nations. Peaceful discourse and adjudication of transnational disputes would replace nationalist impulses and balance-of-power maneuvering, and the world would bathe in comity and peace.

As Wertheim tells it, this was America’s fundamental foreign policy outlook throughout its first century and a half, right up to Wilson’s decision to take America into World War I alongside the Allies.

But wasn’t that decision a violation of Washington’s farewell warning? No, writes Wertheim, because Wilson’s League was designed to “transform the balance of power into a ‘community of power’ in which ‘all unite to act in the same sense and with the same purpose.”’ Wertheim explains that, under the Wilson plan, the United States would  “Americanize Europe” by creating a universal alliance with American participation. This would be a “disentangling alliance” that would “forever end the capacity of European alliances to ensnare the United States.”

The key here is that the increasingly powerful U.S. would not seek “to counterbalance or dominate any rival but instead to render counterbalancing and domination obsolete.” America would be the progenitor of endless peace.

Of course America declined to join Wilson’s League and rejected his broader vision, whether entangling or disentangling. The country entered what most historians have considered an “isolationist” phase (a term that Wertheim abhors, as we will see).

Then came World War II in Europe, which set American planners to the task of developing a grand strategy for what seemed like a new global order. When Hitler conquered France and unleashed his bold effort to destroy Britain’s defensive air power so he could invade, the planners promptly grappled with the American response to a Europe fully dominated by Nazi Germany. Perhaps America could confine its sphere of influence and central trading zone to the Western Hemisphere, including Greenland and Canada and encompassing all or most of South America. It didn’t take long to see, however, that such a zone would hardly sustain the U.S. economy.

Even adding a vast section of Asia, perhaps including a powerful and aggressive Japan (a daunting diplomatic challenge), wouldn’t solve the economic problem while also posing new geopolitical difficulties. The planners seemed stymied.

After Hitler failed to gain dominance over British skies, thus ending any immediate prospect of an invasion and seemingly preserving the British Empire, a new concept emerged: combine the Western Hemisphere with the Pacific basin and the British Empire into a vast area encompassing nearly all of the non-German world. As Wertheim puts it, “Finally, after months of study, the planners had discovered that if German domination of Europe endured, the United States had to dominate almost everywhere else.”  This “everywhere else” became known as the Grand Area, and it was based on the imperative that Germany must be confined to continental Europe and that only American leadership could ensure the success of that enterprise.

This dealt a fearsome blow to what Wertheim considered America’s foundational internationalism, the Wilsonian concept of peaceful dispute adjudication. He writes: “Out of the death of internationalism as contemporaries had known it, and the faltering of British hegemony, U.S. global supremacy was born.” But it still had to be sold to the American people, and that led to two new developments. First, partisans of hegemony demonized opposition thinkers as “isolationists,” a new term of opprobrium designed to put naysayers on their heels. “By developing the pejorative concept of isolationism,” writes Werthheim, “and applying it to all advocates of limits on military intervention, American officials and intellectuals found a way to make global supremacy sound unimpeachable.”

They also conceived the idea of a United Nations to gather other states into the fold and thus “convince the American public that U.S. leadership would be inclusive, rule bound, and worthy of support.” In other words, it was a ruse to help the elites supplant the old notion of placid internationalism with armed supremacy.

Thus do we see, in Wertheim’s telling, how a small group of wayward intellectuals, back in the chaos years of World War II, hijacked the country’s intrinsic internationalist philosophy and reshaped it into something else entirely, inconsistent with traditional Americanism, namely a credo of power politics and global supremacy.

No doubt many opponents of the foreign policy aggressiveness of today’s Republican neocons and Democratic humanitarian interventionists will embrace Wertheim as a sturdy ally in their cause. But they should note that he builds his thesis upon a foundation of dubious history.

George Washington was not a forerunner to Woodrow Wilson, and warning against entangling alliances circa 1797 can’t be logically equated to advocating world government in 1919. Neither can one draw an accurate picture of American foreign policy thinking without noting the force of American nationalism, which played a major role (though of course not the only role) in the formulation of U.S. international relations throughout American history. John Mearsheimer of the University of Chicago calls it “the most powerful ideology in the modern world.” Wertheim hardly mentions it.

He argues that we shouldn’t consider America’s expansionist zeal under James Polk in the 1840s as representing power politics because, after all, the United States was simply consolidating its position on its own continent while eschewing the acquisition of Cuba or all of Mexico (as opposed to gobbling up merely half of Mexico in an aggressive war). But when in history did a major power, after consolidating its position in its own neighborhood, stop there? Did Rome? Did the Ottomans? Did the British? Neither did America.

Similarly, Wertheim disputes any link to power politics on the part of the United States at the turn of the last century by noting that America “continued to stay politically and militarily apart from the European alliance system while intensifying efforts to transform power politics globally.”

The latter part here is false. America built up its navy just in time to destroy Spain’s Pacific and Atlantic fleets, kick that waning empire out of the Caribbean, free Cuba from Spanish dominion, and take the Philippines, Guam, and Puerto Rico. If that wasn’t power politics, the term has no meaning. For that matter, why did the United States annex the globally strategic islands of Hawaii, from which America could project power far into Asia? And why did it build the Panama Canal, which allowed it to concentrate more naval firepower more quickly in more places?

No, America wasn’t born as a benign instrumentality of peace destined to calm the waters of international conflict through means never before seen in any successful guise in the annals of human history. America was born like every other nation, into a world of conflict and danger, buffeted by swirls of power, ambition, and potentially hostile forces. The country proved remarkably adept, like its mother nation, in the arts of self-reliance, self-defense, popular government—and expansionism.

It was therefore natural that when the world turned upside down and power interrelationships got tossed into the air like confetti, those U.S. planners would perceive American power as the greatest hope for stability in the world as well as the greatest hope for U.S. security. For the first 45 years of the new era, the Cold War, America played its role largely with aplomb. Then it went awry when the world changed and the country’s elites could neither see the transformation nor adjust to it.

Wertheim is correct in positing that America’s current foreign policy follies are a product of its leaders’ insistence on clinging to the same ideas that emerged from the minds of those strategic planners back in the 1940s. But in his effort to tell the story of how we got here, he gets it only partially right.