In a surprise twist on the Alexei Navalny saga, and on the very day that it’s being widely reported Biden is preparing sanctions on Russia as punishment for his alleged poisoning by nerve agent last August, the human rights organization Amnesty International has withdrawn its formal designation of Navalny as a “prisoner of conscience”.

Amnesty International has reportedly withdrawn its recent designation of Russian opposition politician Aleksei Navalny’s as a “prisoner of conscience” over his alleged advocacy of violence and discrimination and comments that included hate speech.

Aleksandr Artemyev, the rights watchdog’s media manager for Russia and Eurasia, confirmed the decision to Mediazona on February 23 after the news was first reported by U.S. journalist Aaron Mate.

And just like that it appears the narrative which cast Navalny and his supporters as some kind of ‘anti-Putin freedom fighters’ has been deflated.

The early February street protests following Navalny’s arrest after he arrived from Berlin where he’d been recovering from an alleged poisoning were widely supported by officials in the West, including by the US and some European embassies in Moscow.

New: @AmnestyUK withdraws designation of Navalny as a “prisoner of conscience.” In email, Amnesty says it’s “no longer able to consider Aleksei Navalny a prisoner of conscience given the fact that he advocated violence and discrimination and he has not retracted such statements.” pic.twitter.com/E9m0e6lzT8

Here’s how Amnesty International previously described Navalny and his plight in a January press release:

“He has previously been tried and convicted in two separate, politically-motivated criminal cases. On 29 December, the Russian Investigative Committee levelled new charges against Navalny, accusing him of embezzling 356 million rubles (£3.6m) in donations to the Anti-Corruption Foundation and affiliated non-profit organisations. Amnesty believes these charges are trumped-up.

Navalny has been deprived of his liberty for his peaceful political activism and for exercising free speech. Amnesty considers him a prisoner of conscience and is calling for his immediate and unconditional release.”

This “prisoner of conscience” designation is what Amnesty has now walked back in a clearly humiliating and devastating blow to his cause and his supporters. 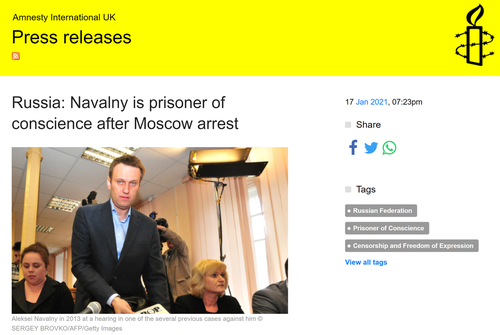 In the wake of the initial reports, an Amnesty official confirmed to independent Russian news outlet Meduza: “Yes, we will no longer use the phrase ‘prisoner of conscience’ when referring to [Navalny], insofar as our legal and political department studied Navalny’s statements from the mid-2000s and determined that they qualify as hate speech.”

As an example of Navalny’s “newly uncovered” hate speech (though long well-known inside Russia), see this…

He was recently sentenced by a Moscow court to serve over 2.5 years in prison for probation violation stemming from a prior embezzlement case.

Amnesty’s dramatic change in designation is related to the “jailed Russian opposition politician’s past statements about migrants from Central Asia and the North Caucasus [which] constitute hate speech,” Meduza writes. But the question now remains how quickly he’ll be dropped as a darling of Western media coverage which has included a recent flurry of ‘romanticized’ reports on the anti-Kremlin activist, if at all.

Previous post: [ Capitol Riots Were A Dark Day For American Journalism ]
Next post: [ 60 Years After Eisenhower's Warning, Distinct Signs Of A 'Digital-Intelligence Complex' ]