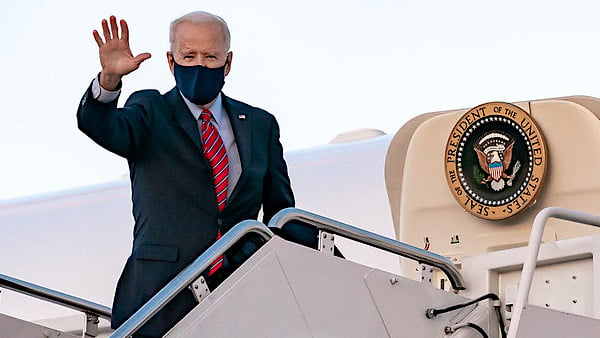 President Biden regards himself as a “devout Catholic,” but the archbishop who chairs the U.S. Conference of Catholic Bishops pro-life committee begs to differ.

Archbishop Joseph Naumann of Kansas City contends the president needs to be honest, “stop defining himself as a devout Catholic” and admit that his support for the killing of the unborn violates with the church’s unequivocal stance on the sanctity of life.

Nauman, in an interview with Catholic World Report reported by the Daily Wire, was asked,  “Mr. Biden professes to be a devout Catholic, yet is 100% pro-choice on abortion. How do you think America’s bishops ought to respond to this situation?”

“I can tell you how this bishop is responding. The president should stop defining himself as a devout Catholic, and acknowledge that his view on abortion is contrary to Catholic moral teaching,” Naumann replied.

He said it would be “more honest” for Biden to say “he disagreed with his church on this important issue and that he was acting contrary to church teaching.”

“When he says he is a devout Catholic, we bishops have the responsibility to correct him,” said Naumann. “Although people have given this president power and authority, he cannot define what it is to be a Catholic and what Catholic moral teaching is.”

The archbishop said Biden is “usurping the role of the bishops and confusing people.”

He’s declaring that he’s Catholic, and is going to force people to support abortion through their tax dollars. The bishops need to correct him, as the president is acting contrary to the Catholic faith,” he said.

Biden already has signed a series of executive orders rolling back abortion restrictions implemented by the Trump administration, including the Mexico City policy banning funding of foreign groups that conduct abortions.

Biden also has withdrawn the U.S. from the pro-life “Geneva Consensus Declaration” signed by the Trump administration last year with dozens of other countries. It declares there is “no international right to abortion, nor any international obligation on the part of States to finance or facilitate abortion.”

On the home front, Biden signed a memorandum directing the Department of Health and Human Services to consider eliminating the Trump administration’s rule reforming Title X federal family planning program. The rule blocked tens of millions of dollars in grants that previously went to Planned Parenthood and other abortion providers.

In 2019, a Catholic priest denied Biden the sacrament of Holy Communion because of his stance on abortion conflicted with the Catechism of the Catholic Church, which regards abortion as an grave moral evil.

The priest explained that Holy Communion “signifies we are one with God, each other, and the church.”

“Our actions should reflect that. Any public figure who advocates for abortion places himself or herself outside of church teaching,” he said.

Naumann said Biden “has the responsibility not to present himself for Holy Communion.”

“When Catholics receive the Eucharist, they are acknowledging the real presence of Jesus, and also believe in the teachings of the church,” he explained.

“President Biden doesn’t believe in the church’s teachings on the sanctity of human life, and he should not put the priest in the situation where he has to decide whether or not to allow him to receive the Eucharist,” Naumann said.

“He should know that after 78 years as a Catholic.”

Naumann said he doesn’t expect to be in the position of having to deny communion to Biden.

However, he believes that Biden’s bishop has “a responsibility to dialogue with him about this issue. “

“What he is supporting is a serious evil. I don’t know the disposition of his mind and heart, but his act of supporting legal abortion is wrong,” Naumann said.

The post Archbishop to Biden: Stop calling yourself a 'devout Catholic' appeared first on WND.

Previous post: [ Can Conservatives Fuse Pro-Family Policies With Free Markets? ]
Next post: [ JPM: "Bond Yields Are Likely To Move Higher From Here" But The Real Question Is "What's Behind The Move" ]