On February 1st, the siege at the Afrik Hotel in Mogadishu ended, with security forces taking the upper hand. 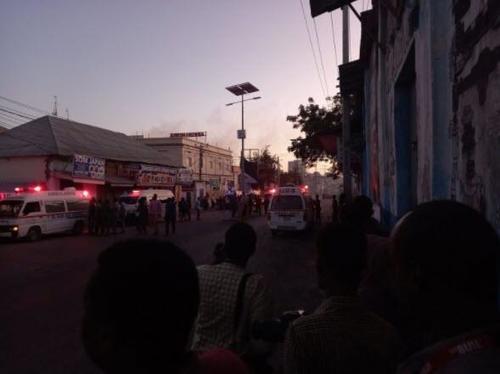 Islamist group al-Shabab claimed responsibility for the assault through their radio station.

The attack featured clashes with heavy gunfire, which followed a car bombing. The entire incident took longer than 7 hours.

Among those killed at the popular hotel was the well-known retired General Mohamed Nur Galal, said Somalia’s Information Ministry. Another general and more than 100 civilians were reportedly rescued during the siege.

According to various reports, anywhere between 9 and 17 people were killed, and at least 30 were injured.

“The operation is over now,” said police spokesman Sadik Ali.

“I have never witnessed such a level of devastation,” said bystander Ali Ato, who said he went to the hotel to recover the body of a colleague.

THICK white smoke can be seen rising up over Mogadishu after a bomb explosion at Afrik hotel around the city’s airport on Sunday afternoon. #Somalia. pic.twitter.com/F7PdRY0R3m

My prayers and thoughts are with the families and friends of those affected by the terror attack in Somalia today. I strongly condemn this cowardly attack on innocent civilians. We are confident that Somalia will win the war against terror. #Somalia #afrikhotel pic.twitter.com/1bGZPgTDUS

Somalia is scheduled to hold indirect parliamentary and presidential elections on February 8, but two regional states, Jubbaland and Puntland, have objected to how delegates were selected and electoral management bodies appointed.

The Associated Press quoted United Nations special representative James Swan warning officeholders that their use of a resolution to stay on would bring “an unpredictable political situation in a country where we certainly don’t need any more of that.”

#BREAKING: Explosion followed by gunfire is reporting from Afrik Hotel in Mogadishu #somalia, the casualties is unknown, conflicting information coming there the situation very intense. pic.twitter.com/NgZQpQshBR