At Loyola Blakefield in Maryland, Black alumni pave the way for future students 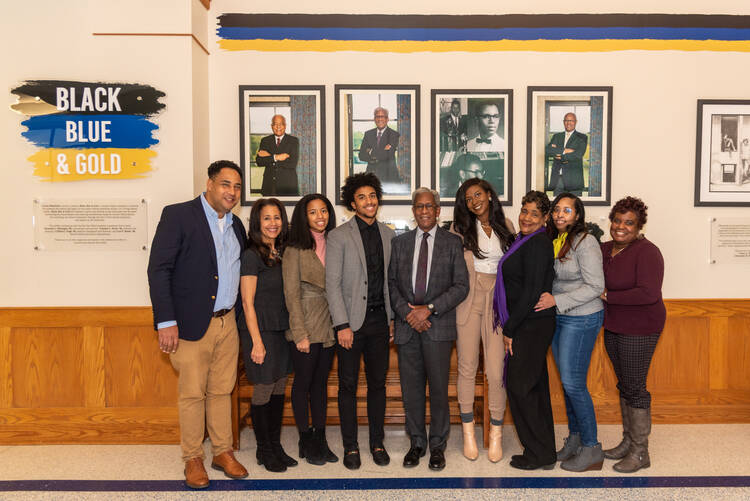 Bernie Bowers had a choice to make. His parents told him he could decide which high school to attend in the Baltimore area.

This was in the mid-1970s, and Mr. Bowers had been bused to a junior high across town. “There was still some segregation and stuff back then,” he told America.

“I was an athlete at that point, and a fairly decent student,” Mr. Bowers said. “So I marketed myself around to see where I really wanted to go.”

Kenneth Montague became the first African-American student at Loyola in 1956. He “opened the door for others to follow.”

His father brought him to the different schools, two private and one public, and Mr. Bowers always made sure to talk to the coaches.

“Coach Joe Brune was the head coach at Loyola at the time,” he said. “Coach Brune was the only coach that was going to allow me to try out to play the position I wanted to play, and that was quarterback.”

As a sophomore, Mr. Bowers became the first African-American starting quarterback at Loyola Blakefield in Towson, Md., just outside of Baltimore.

“It was one of the best decisions I ever made,” Mr. Bowers said of choosing Loyola. Those four years, he said, formed him into the man he is today. And that is why he came back to the all-male school, which educates students from sixth through 12th grade, to serve as director of diversity, equity and inclusion.

In a way, the Black students who attended Loyola before Mr. Bowers helped pave the way. The school recently honored its first four Black students with a living history exhibit, dubbed “Black, Blue, & Gold.” Over the next several years, that exhibit will expand.

Kenneth Montague became the first African-American student at Loyola in 1956. According to Anthony Day, president of Loyola, Mr. Montague “opened the door for others to follow.”

Mr. Montague was followed by Timothy L. Porter four years later. When the two enrolled, they were the only Black students at the school. They both went on to become attorneys after graduating in 1960 and 1964, respectively.

Clifford J. Pugh, who graduated from Loyola in 1966, became a political campaigner and financier. Carl F. Stokes, who graduated in 1968, went on to hold elected office and became a school administrator.

Loyola’s Black alumni, whom Mr. Bowers described as a “very close knit fraternity,” made the exhibit happen. The four first graduates are honored alongside Frank Fischer, a former Jesuit who began recruiting African-American students to the school and securing financial support for those who needed it. He died in 2018.

The school’s Fischer Program, named after Frank, encourages middle school students of color from the Baltimore area to prepare to apply to Loyola for high school. The tuition-free, three-year program begins with incoming sixth graders. During the program, participants spend five weeks in the summer studying English, mathematics and science in the mornings. After lunch, they take part in summer camp activities.

“We want to expose these kids that may not have had the opportunity in their own Baltimore city or county school system to experience what it would be like to attend a school like Loyola,” said Mr. Bowers, who directs the program.

Teachers from the summer sessions visit the students throughout the year at their schools. Typically, there are 10 to 12 students at each grade level, Mr. Bowers said. This year, Loyola accepted six of them into its high school.

“There are a lot of things that the African-American alumni here really want to get involved in,” Mr. Bowers said. “And I try to keep them as involved as possible. That way I can shut them up!” he added jokingly.

“We don’t want this to be perceived as a box we’re checking, right? The African-American community here at Loyola, they’re part of our DNA.”

Overall, 75 percent of students at the school receive some level of financial support, with the majority receiving need-based assistance, according to Mr. Day. Next year, students will receive $4.5 million in aid; the average award will be about $6,000 to help cover the approximately $22,000 tuition. The school also offers a four-year scholarship to incoming ninth graders whose mother or father is an employee of a historically Black college or university.

To date, there have been 519 African-American graduates of Loyola. Today, in a school of 950 students, about 14 percent are Black; another 6 percent are from other minority communities. That is a relatively recent trend, according to Mr. Day, the school’s president.

“Over the past few years, we’ve been much more intentional here in recruiting faculty and staff of color,” he said. There are 155 faculty and staff members at the school, 13 of whom are Black. This last year, the school saw a higher percentage of African-American families apply, and Mr. Day suspects it is related to the diverse faculty. He also noted the work of the curriculum committee, which diversified the school’s offerings.

“This effort reflects our identity. This is who we are,” Mr. Day said. “We don’t want this to be perceived as a box we’re checking, right? The African-American community here at Loyola, they’re part of our DNA.”

Alumni and staff are also mindful of the Jesuit history of slave ownership in the area. Georgetown University created the Georgetown Slavery Archive in 2016 to house material related to the university’s ties to enslavement. Last year, the Society of Jesus announced a partnership with the descendants of people they once enslaved to reconcile and heal the deep racial wounds in the United States.

Mr. Porter, the second African-American to graduate from the school, is one such descendant, according to Mr. Bowers. “It’s a part of our history and we don’t shy away from it,” he said.

Mr. Day agreed, adding that the mission of the school today is to meet people where they are. “Our mission calls us to the margins,” he said. “It calls us to make a Loyola education, and the full experience, accessible to all.”

It is a work in progress, Mr. Day said.

“I think I can speak for the community and say that we still have much further to go, and we want to go much further in diversifying both our student body, as well as our faculty and staff,” he said. “That’s an institutional commitment here at Loyola.”

Jesuit School Spotlight is a monthly feature focusing on Jesuit middle and secondary schools from around the country. It is underwritten in part by Jesuit high schools of the USA East Province of the Society of Jesus.