Australia’s Yield Curve Control Is On The Verge Of Collapse

Three weeks after Australia’s central bank announced on Feb 1 an extension to its QE program by a further A$100 billion (when it also said it doesn’t expect to increase interest rates until 2024) in the pursuit of the central bank’s yield curve control – as a reminder Governor Philip Lowe had previously set the three-year yield target at 0.10% – overnight the RBA purchased a whopping (for Australia) $3BN in three-year government bonds in the secondary market on Thursday – triple the amount it bought on Monday and the most since the bond market turbulence during the COVID-19 panic last March.

6 months before we see this headline about the Fed

And all in the name of preserving the RBA’s credibility and keeping the 3Y yield around 0.10%.

Unfortunately, it increasingly appears that the RBA’s Yield Curve Control is failing as the market is pressuring the central bank’s commitment to the point of failure. When the RBA announced to the market at 11:15am on Thursday that it would purchase $3 billion of three-year bonds, the yield on the April 2024 bond declined slightly from 0.13 per cent to 0.125 per cent. But yields soon after jumped as high as 0.14 per cent, before settling back at 0.13 per cent.

According to ANZ economist David Plank, the RBA had been “unsuccessful” in dampening bond yields at the short and long end of the curve and the RBNZ’s move had made the RBA’s task more difficult. “There is upward pressure on market interest rates and that will flow through into quite a bit more expensive borrowing rates for states and corporates for 10-year money compared to the start of the year” (mortgage rates are not priced off the long-term, 10-year bond yields).

Similar to his Fed peers, RBA governor Philip Lowe has said he doesn’t expect the cash rate to rise until at least 2024, but his guidance is being challenged by bond traders who are observing the scorching inflation everywhere and are convinced it is only a matter of time before Australia yields.

As shown below, the yield on the three-year government bond remained stubbornly elevated at 0.13%, 3 basis points above the RBA’s 0.10 per cent target. 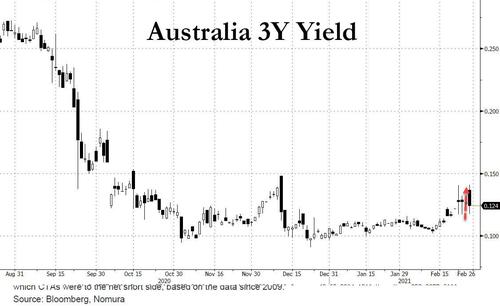 But the biggest shock, according to Bill Bovingdon, ALTIUS Asset Management’s chief investment officer, is that the market “barely moved on what should have been a pretty positive surprise.”

“I think they might need to intervene at the longer-end with more QE because otherwise this will have unhelpful spillover effects in the currency and start to impact on things like property trusts and a broader contagion into equities.”

Australia’s 10-year borrowing cost has jumped to 1.72% – a doubling of the yield since the RBA officially unveiled its QE program last November. ANZ’s Plank said the rise in global long-term yields was a “good news story” about the success of fiscal and monetary policy stimulus.

“But there has been a lift in Aussie rates quite a bit higher than US yields and that means that there will be more buying of Australian bonds and push up the Australian dollar.” As a result, “The market is confused about the RBA’s messaging.”

A big reason for the lift higher in yields is surging commodity costs: iron ore prices have surged to above $US175 a tonne – the highest level in a decade which has contributed to upward pressure on the local exchange rate.

Meanwhile, with virtually all RBA ammo used, the Australian dollar is on the cusp of breaking above US80¢, despite renewed ultra-easy monetary policy commitments by all central banks. This is becoming a major headache for export-heavy Australia.

And as it watches its policy have less and less impact, the RBA now owns $18.5 billion of the $33 billion April 2024 bond. The market is pricing in a jump in rates, with the yield on the November 2024 bond blowing out to 0.36 of a percentage point (36 basis points).

A market participant quoted by Financial Review, said there was not huge selling of local government bonds in recent days, but there was not a lot of buying. When there is less demand for bonds, bond prices fall and yields rise.

Ultimately, there is just one “solution” – the RBA will have to step in and buy much more bonds… which incidentally is how the surge in US Treasury yields will also end, with the Fed capitulating and realizing it too has to join the rest of the world in (at least trying to) control the entire yield curve. At that point, capital markets will officially die.