If you worked in the banking sector last year, you may not have even known the country was in the midst of a massive recession that left tens of millions unemployed or underemployed. That’s because investment banking was still, backed by the Federal Reserve, able to pull off a banner year.

But despite the great performance and many bank stocks currently trading at, or around, 52 week highs, bonuses for 2020 are set to disappoint.

Credit Suisse wound up reducing its bonus pool by about 7%. Recall, we noted in mid-January that the bank was considering cutting its bonus pool by “at least” 10%.The report also noted that a reduction to the bonus pool could extend to as much as 15%. And so, in comparison, the cuts came in lower than expected. The company’s overall bonus pool for 2019 was reduced by 1% from 2018 and stayed flat the year before.

Back in December 2020, Credit Suisse CEO Thomas Gottstein blamed the cuts on social responsibility, stating that “it’s too early to say, but generally you have to expect that bonuses will be down compared to last year and this is part of our solidarity and social responsibility. This is a challenge, but it’s something the whole industry is facing.” 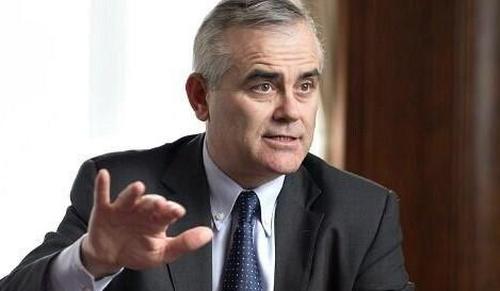 In an interview with FT, Gottstein said he was trying for a “clean slate” to start 2021 after the bank was mired with a corporate spying scandal and the bank’s involvement with names like Luckin Coffee and Wirecard.

“There will never be a totally clean slate. We will always have issues, but it’s certainly my goal to start 2021 with as clean a slate as possible,” he said. “My clear intention is to work through these legacy cases. 2021 is the new era for Credit Suisse where we want to go into offence and we want to grow.”

Deutsche Bank also had to scale back a plan to increase bonuses after the EU objected, but the bank still wound up boosting bonuses for traders by 10%. It is a balancing act that many banks are working on – trying to keep their key staff while not upsetting regulators. Other banks, like Goldman Sachs, have focused specifically on compensating their traders – who were a large driver of revenue in 2020 – while making cuts elsewhere.

Paul Sorbera, president of Wall Street executive-search firm Alliance Consulting in New York, told Bloomberg: “Instead of banks compensating their employees well, the banks have sought to pay people just enough so they won’t leave. It’s particularly been this way since the credit crisis. Covid was a global disaster. I never understood the irrational exuberance about prospective bonuses. It just isn’t the way banks operate any more.”

European regulators, in particular, have called on banks to use “extreme moderation” when issuing bonuses for 2020. In fact, the ECB has argued that “banks have only withstood the pandemic so well thus far because of massive support from governments and central banks.” This echoes sentiment in the U.S., where the idea of issuing massive bonuses during the middle of a pandemic offers poor optics.

“The optics aren’t good right now for large payouts”, Mayra Rodriguez Valladares, a former analyst at the NY Fed who now trains bankers and regulators through her consulting firm, MRV Associates, told Bloomberg back in January. “The more you reward the big lenders, the big traders, they take on more risk,” which would attract criticism, she said. Well, yes, but it would also attract bailouts so in the end everyone wins. Except taxpayers of course.

Recall, we reported “internal drama” at Bank of America this month after the bank waived its bonus policy for veteran traders and dealmakers while keeping it in place for others. The bonuses in question are shares that are granted to executives who earn $1 million or more. Instead of shares vesting in equal parts over a timeframe, they now all vest only at the end of four years. The new policy has caused “internal drama”, according to Bloomberg. 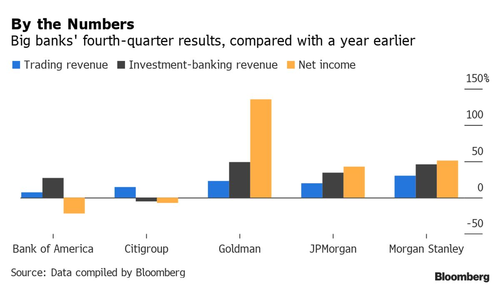 The new rules were supposed to be applied broadly, but it has been revealed that many top investment banking and trading veterans spoke out against having to wait 4 years for their bonuses. As a result, management agreed to exempt them. CEO Brian Moynihan said on January 27 that the new policy “didn’t work the way some people wanted it to, so we fixed it.”

But others at the bank, who were not exempted, have been “gathering on calls to vent frustrations and discuss options.”

We also wrote back in late December that Goldman Sachs could offer larger bonuses for its traders, as a result of a 49% rise in revenue the division. Traders who were able to navigate the volatility associated with Covid during the year are more likely to earn fatter bonuses than those who worked in sales, maintaining client relationships, we noted. Goldman believes its success in trading will continue past 2020 and past what is looking increasingly like a one-off sell off in the market, spurred by the pandemic.

While we expect most bankers to be furious for not getting a substantial raise to match the surging revenue of their employers, the news should probably not be a surprise, and as Bloomberg adds hints “have been emerging for weeks that some banks would opt to keep a lid on compensation for Wall Street operations pulling in loads of cash, ending a years-long period in which revenue and compensation have generally moved by similar degrees.”

By late November, Bank of America Corp. executives were discussing proposals to keep its bonus pool for sales and trading at the prior year’s level. By December, Citigroup aimed to leave its overall pot unchanged for equities, while boosting it for bond traders by at least 10%. More-generous increases approaching 20% were under discussion in Goldman Sachs and JPMorgan, but even there, the thinking was that moves would vary widely.

In the end, however, the news was bad with Goldman’s earnings showing the firm cut the share of revenue it spent on compensation to 30% last year, down from about 34% or more in the prior three years. At JPMorgan’s corporate and investment banking division the ratio fell to just 24%, down from 28% in those earlier years. Morgan Stanley also shaved two percentage points off its compensation ratio. 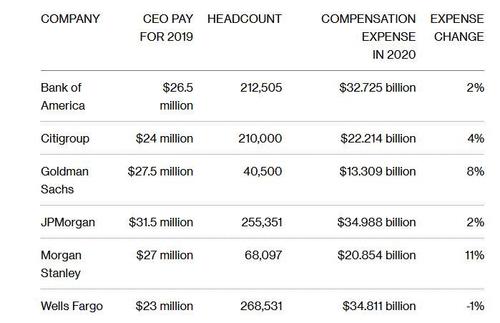 Asked about the drop in comp, Goldman CFO Stephen Scherr said that “our philosophy remains to pay for performance, and we are committed to compensating top talent. Our full year compensation ratio is at a record low, reflecting the operating leverage in our franchise. As we have said in the past, we view the compensation ratio metric as less relevant to the firm as we build new scale platform businesses.”

Previous post: [ Luongo: Merkel's War For Germany Is Nearly Over ]
Next post: [ 3 Top Democrats Who Celebrated Or Denied Leftist Street Violence Get Big Bucks From Hypocrites In Corporate America ]