The Biden administration has removed just 2,000 of the more than 30,000 migrants who surged to the border in Del Rio in September, Homeland Security Secretary Alejandro Mayorkas said Friday.

Scenes of approximately 15,000 migrants camped under the Del Rio bridge drew national and international headlines, as well as outrage from lawmakers on both sides of the aisle. The administration surged resources and Border Patrol to the area, although it subsequently ended horse patrol within days amid debunked allegations that Haitian migrants were being “whipped.”

Mayorkas on Friday announced from the White House podium that “there are no longer any migrants in the camp underneath the Del Rio International Bridge.” 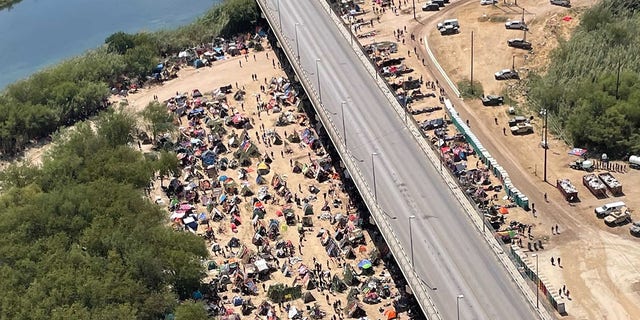 He told reporters nearly 30,000 migrants had surged to the border since Sept. 9, and that approximately 12,400 had been allowed to have their cases heard by an immigration judge “to make a determination on whether they will be removed or permitted to remain in the United States.” These migrants were released into the United States with either a notice to appear in court or a notice to check into an Immigration and Customs Enforcement (ICE) office.

Mayorkas said an estimated 8,000 migrants “have decided to return to Mexico voluntarily” and just over 5,000 are being processed by DHS to determine whether they will be expelled or placed in immigration proceedings in the U.S.

OFFICIALS SAY AS MANY AS 30,000 MIGRANTS FLOODED DEL RIO, ALL HAVE BEEN CLEARED FROM CAMP

Mayorkas also revealed that migrants were not tested for COVID-19 while they were under the bridge and that he did not know how many COVID cases there were among the migrants, who were packed together for days in squalid conditions.

Mayorkas also stood by the administration’s decision to put a number of Border Patrol agents on desk duty after images emerged of the agents on horseback blocking migrants from entering the U.S. Activists, lawmakers and President Biden have promoted debunked narratives that agents “whipped” the migrants and have said there is an investigation ongoing.

Mayorkas also defended the administration’s “three-part plan” to solve the migration crisis, even as the number of migrant encounters in July and August exceeded the 200,000 mark.

“We invest in the root causes to address the need to address the reason why people leave the homes in which they live and take a perilous journey that they should not take,” Mayorkas said. “Second, the building of safe, orderly and humane pathways. And third, rebuilding an asylum system and a refugee program that were dismantled in the prior administration.”