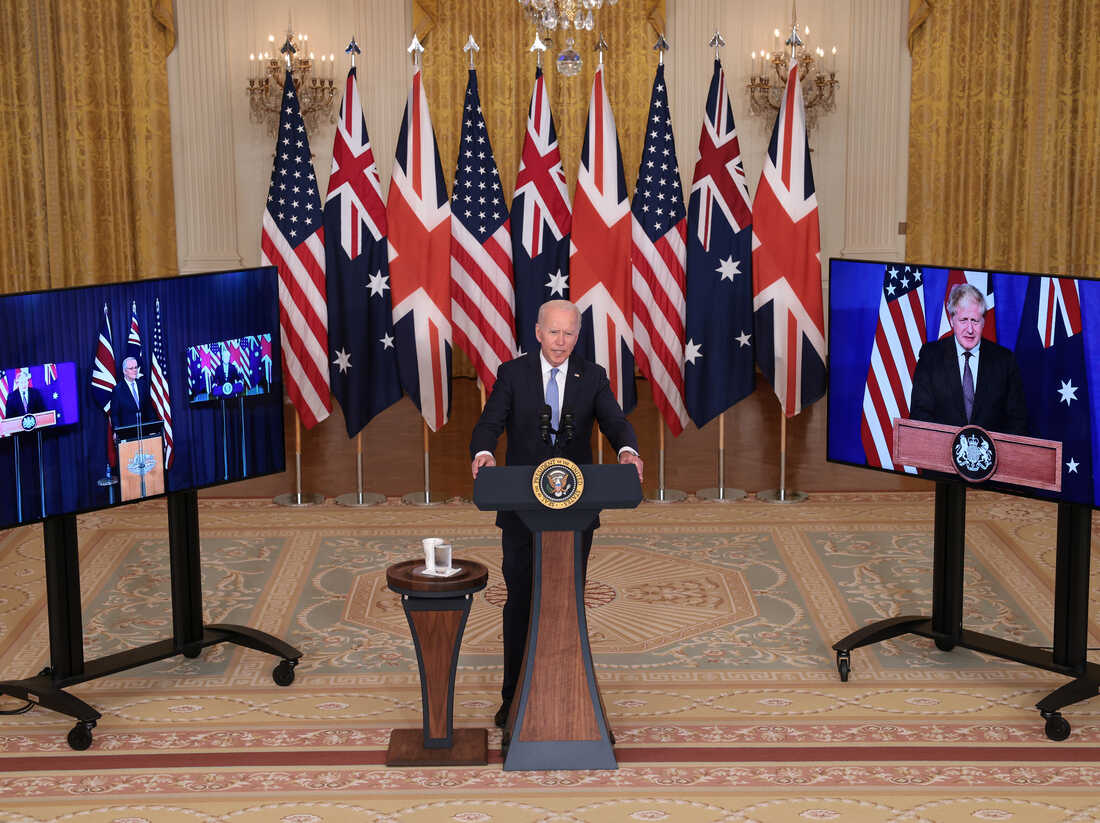 One thorny issue facing President Biden at the U.N.: the defense deal he announced with Australia and the United Kingdom, which left France so angry that it pulled its ambassador from Washington. Win McNamee/Getty Images hide caption 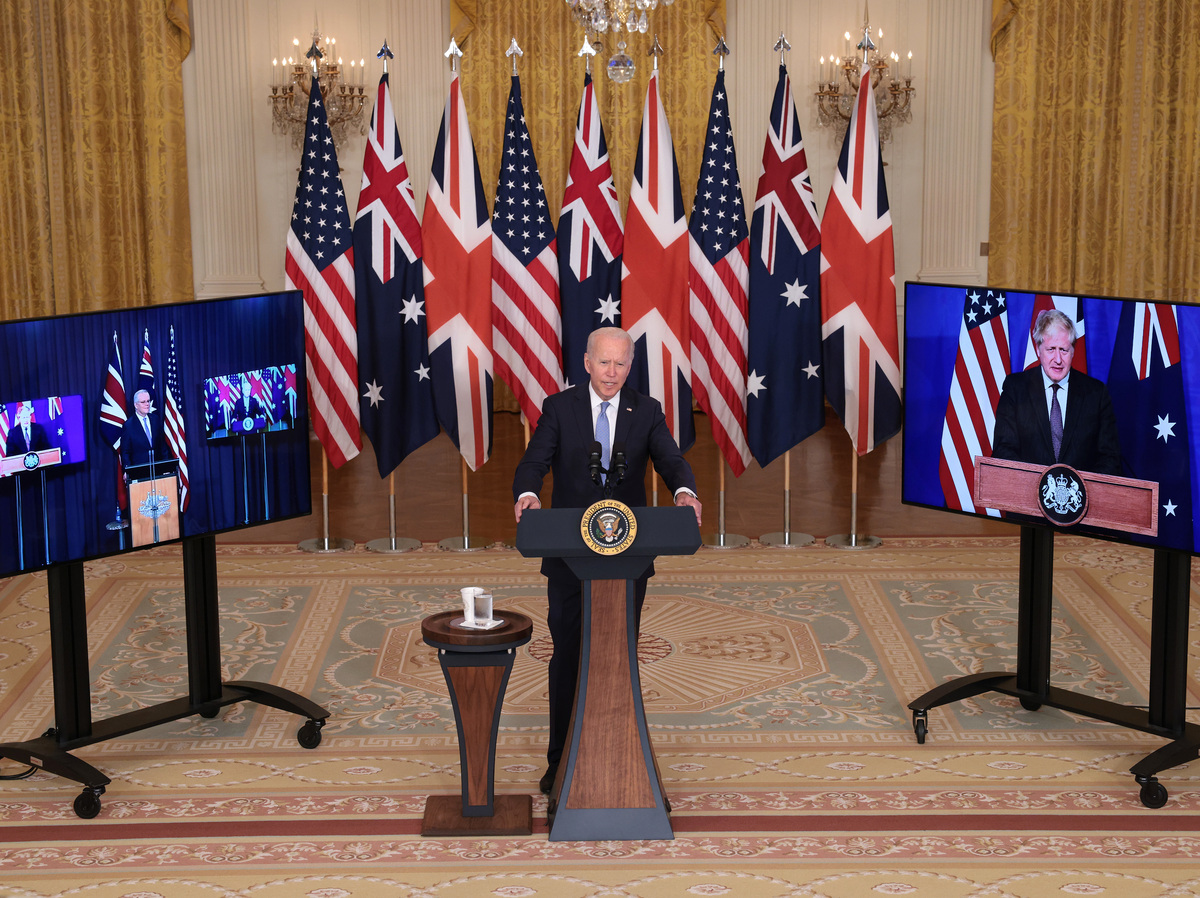 One thorny issue facing President Biden at the U.N.: the defense deal he announced with Australia and the United Kingdom, which left France so angry that it pulled its ambassador from Washington.

As President Biden prepared for his maiden speech to the United Nations General Assembly on Tuesday, his White House was reeling from a trifecta of bad news stories — headlines that underscored questions about U.S. leadership in the world.

The Pentagon acknowledged it had killed an aid worker, seven children and two other civilians in a drone strike in Kabul during the tumultuous withdrawal of U.S. troops last month. One of America’s oldest allies — France — pulled its ambassador from Washington, angry about being left out of a new defense partnership in the Indo-Pacific, and about losing a valuable submarine contract with Australia.

And an important scientific advisory body failed to give a ringing endorsement to Biden’s plans to give Americans COVID booster shots — plans that have been criticized by the World Health Organization as people in many parts of the world have yet to receive a single dose.

It’s against this backdrop that Biden will make this key address to a global audience to try to convince them of his pledge that “America’s back,” an assurance that he is committed to working with allies and partners in a way that his “America first” predecessor, former President Donald Trump, was not. 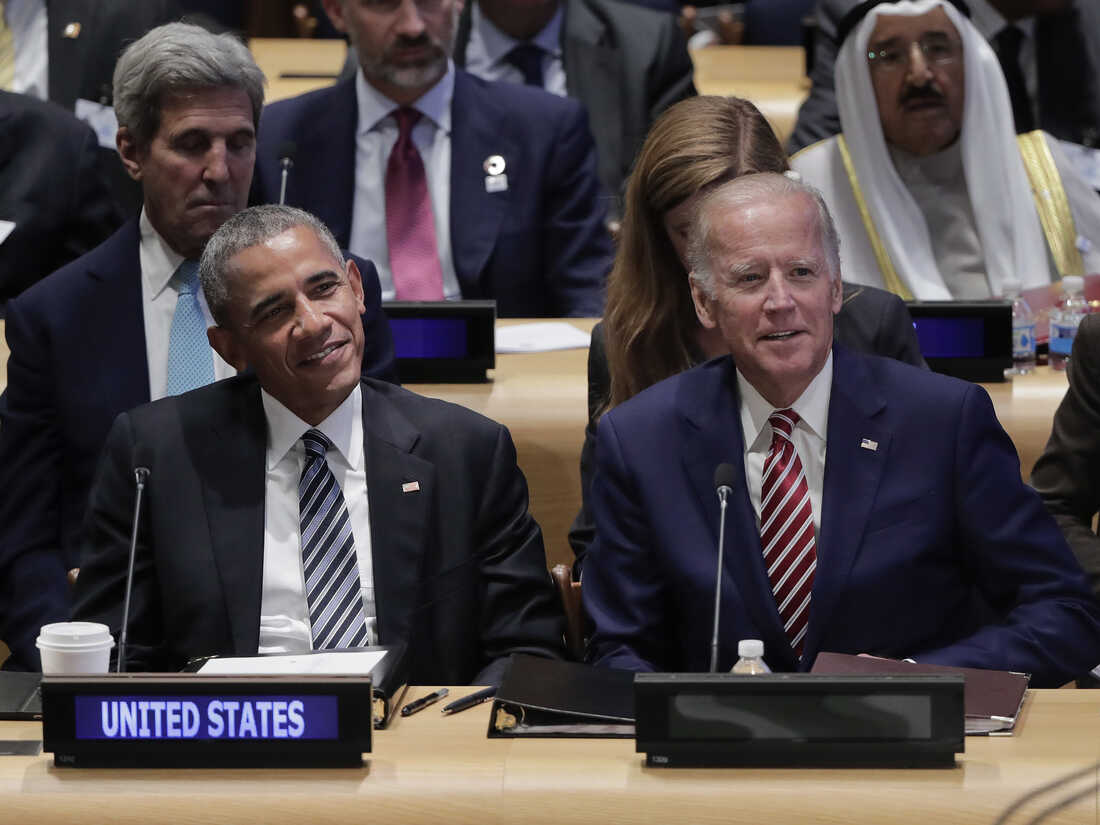 Biden, then vice president, sits with President Barack Obama at a summit on refugees during the U.N. General Assembly in 2016. Julie Jacobson/AP hide caption 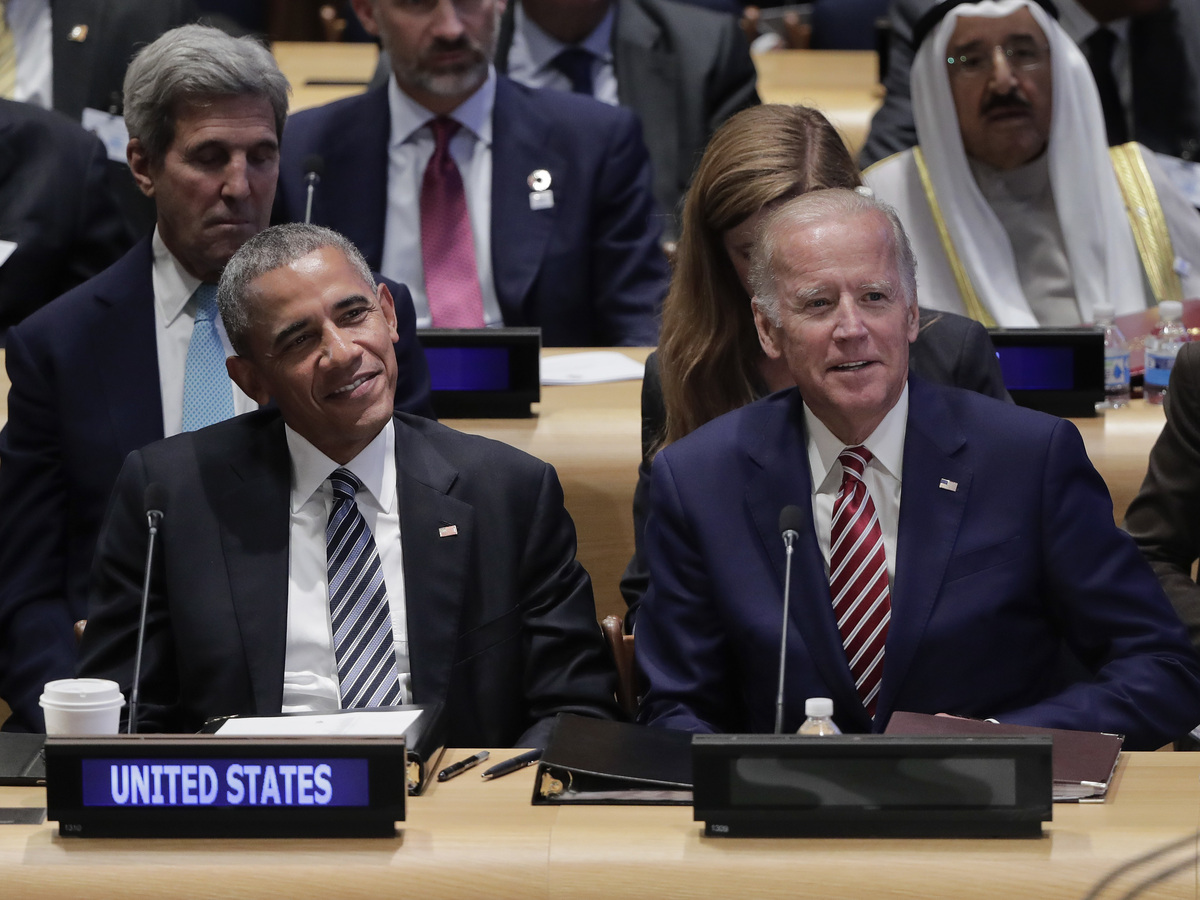 Biden, then vice president, sits with President Barack Obama at a summit on refugees during the U.N. General Assembly in 2016.

Biden’s U.N. history may buy him some goodwill

At the U.N. General Assembly, Biden will be working to secure meaningful commitments from the world on two of his top priorities: fighting the COVID pandemic, and addressing climate change.

While it’s his first time there as president, he is no stranger to the institution. That history will likely buy him some goodwill.

Biden was the top Democrat on the powerful Senate Foreign Relations Committee in the 1990s, a time when the United States had held back contributions to the U.N. He was instrumental in brokering a funding deal with his Republican counterpart on the committee, Jesse Helms, a staunch opponent of the U.N., in exchange for reforms.

As vice president, Biden often made the rounds with world leaders at the General Assembly meeting, and sat in for then President Obama in different sessions. He helmed a U.N. peacekeeping summit in 2014.

“Joe Biden probably knows more about the U.N. than any other president in recent years, with the exception of George Bush, Sr. who had actually been an ambassador to the U.N.,” said Richard Gowan, U.N. director of the International Crisis Group, an advocacy group.

After former President Trump’s open antagonism to the U.N., Gowan said many world leaders would be breathing a sigh of relief to hear from a more traditional U.S. president. But he said Biden needs to do more than just not be Trump.

“Biden really does have to convince other leaders,” Gowan said, noting the president needs to show that “he’s getting a grip on U.S. domestic politics.” 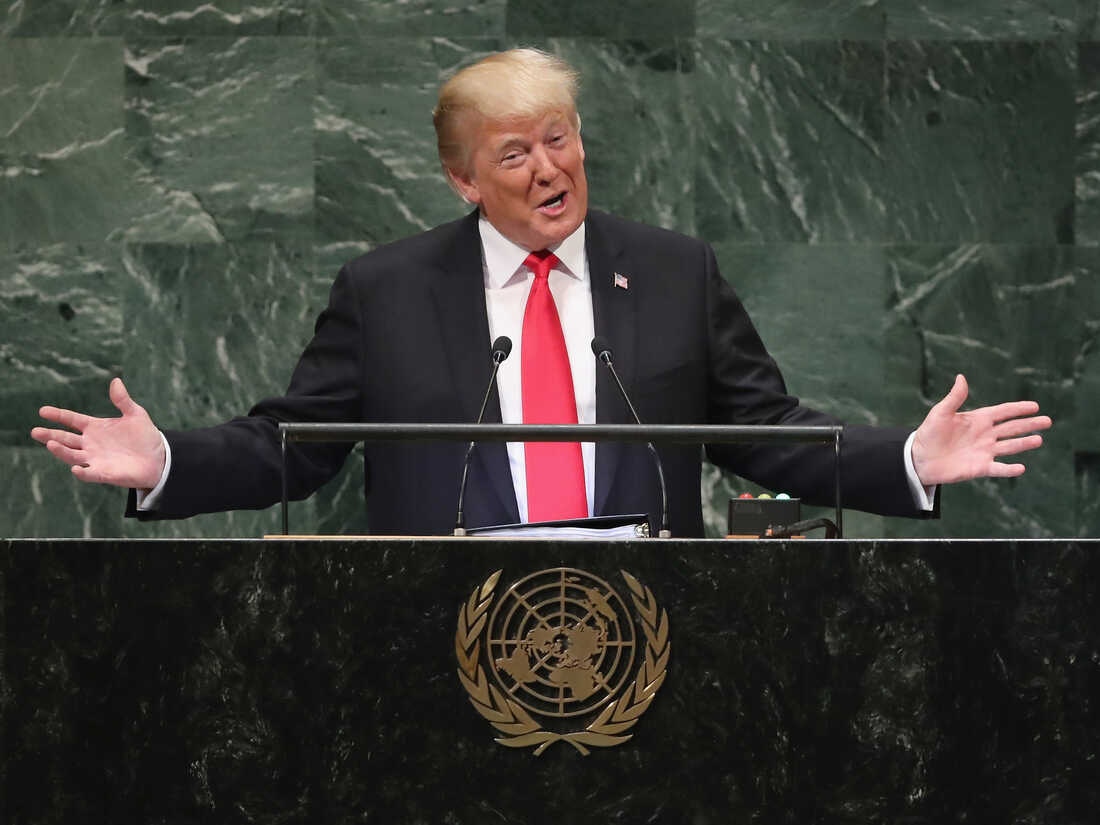 In 2018, former President Donald Trump drew laughter during his speech to the U.N. General Assembly when he bragged about his accomplishments. “I didn’t expect that reaction, but that’s OK,” he said. John Moore/Getty Images hide caption 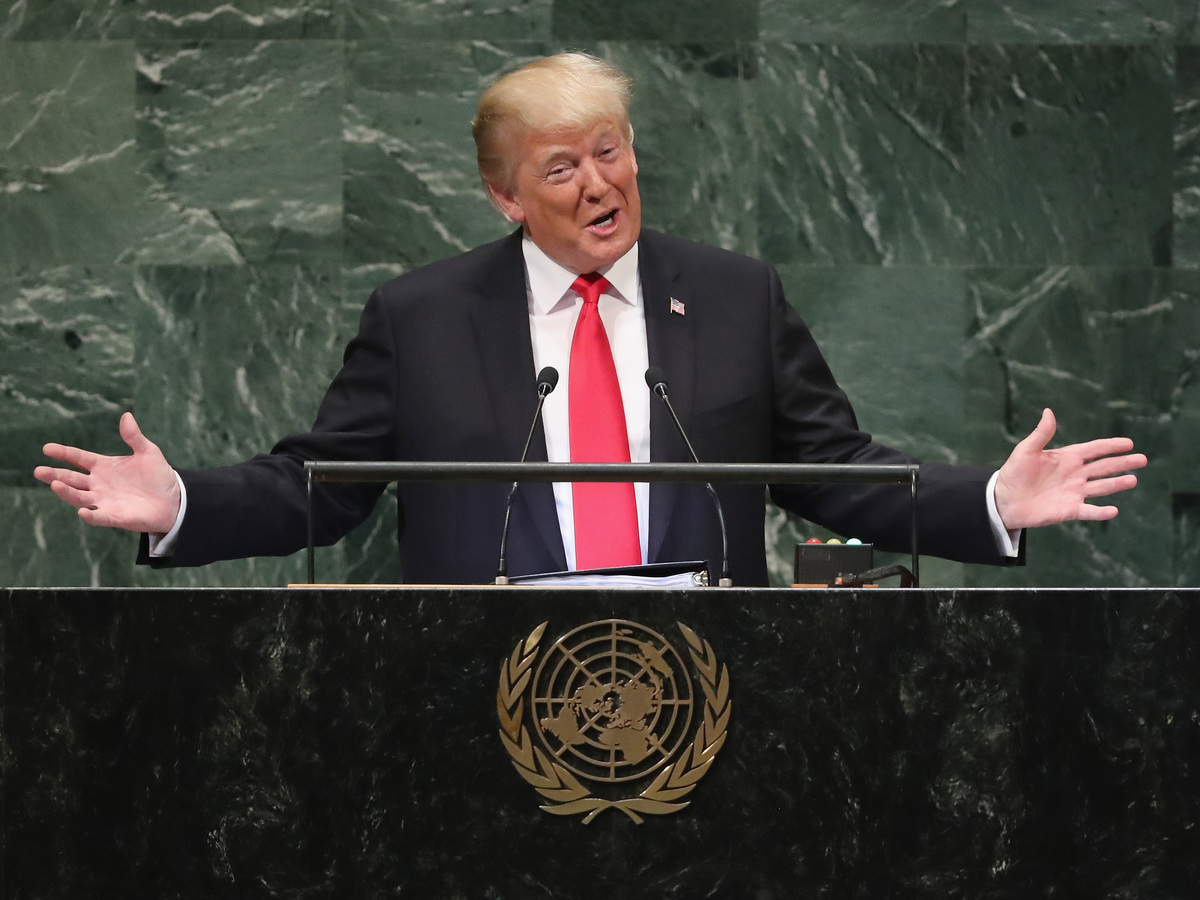 In 2018, former President Donald Trump drew laughter during his speech to the U.N. General Assembly when he bragged about his accomplishments. “I didn’t expect that reaction, but that’s OK,” he said.

While Biden is a well-known internationalist, he faces questions about his approach to working with allies after the chaotic exit from Kabul, said James Dobbins, a long-time diplomat. Biden had framed his decision to pull troops out of Afghanistan as being in the U.S. national interest, sticking to it despite reservations from some allies.

“The United Nations has additional burdens as a result of the U.S. departure,” said Dobbins, who served under multiple presidents. Dobbins saw Biden’s approach to foreign policy first hand when Biden was a senator and also during the Obama administration, when Dobbins served as special representative to Afghanistan and Pakistan.

Dobbins recalled running into Biden on an Amtrak train headed to Washington, shortly after the U.S. invasion of Iraq. “He stopped reading his newspaper and asked me to sit down across from him,” said Dobbins, now a senior fellow the Rand Corporation. “And for the rest of the trip, from Wilmington to Washington, he probed me on what we should be doing in Iraq and Afghanistan.”

Years later, when Biden was vice president, Dobbins was a part of a group of about a dozen experts invited to have dinner with him at his residence. Biden still had questions, but had become decidedly skeptical of the military mission in Afghanistan.

“He’s pretty open minded, at least initially,” Dobbins said. “And then when he made his mind up, he tended to stick to that position.” 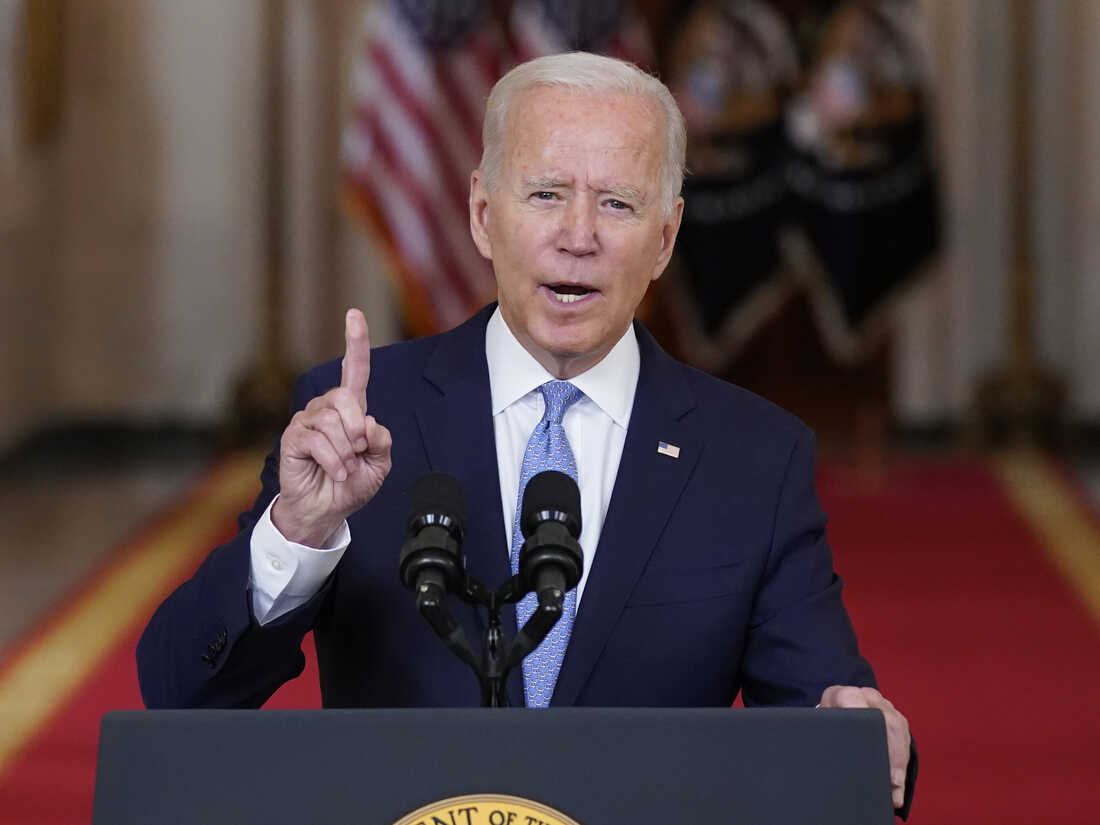 President Biden, in an address about the end of the war in Afghanistan on Aug. 31, said it was no longer in the U.S. national interest to be there. Evan Vucci/AP hide caption 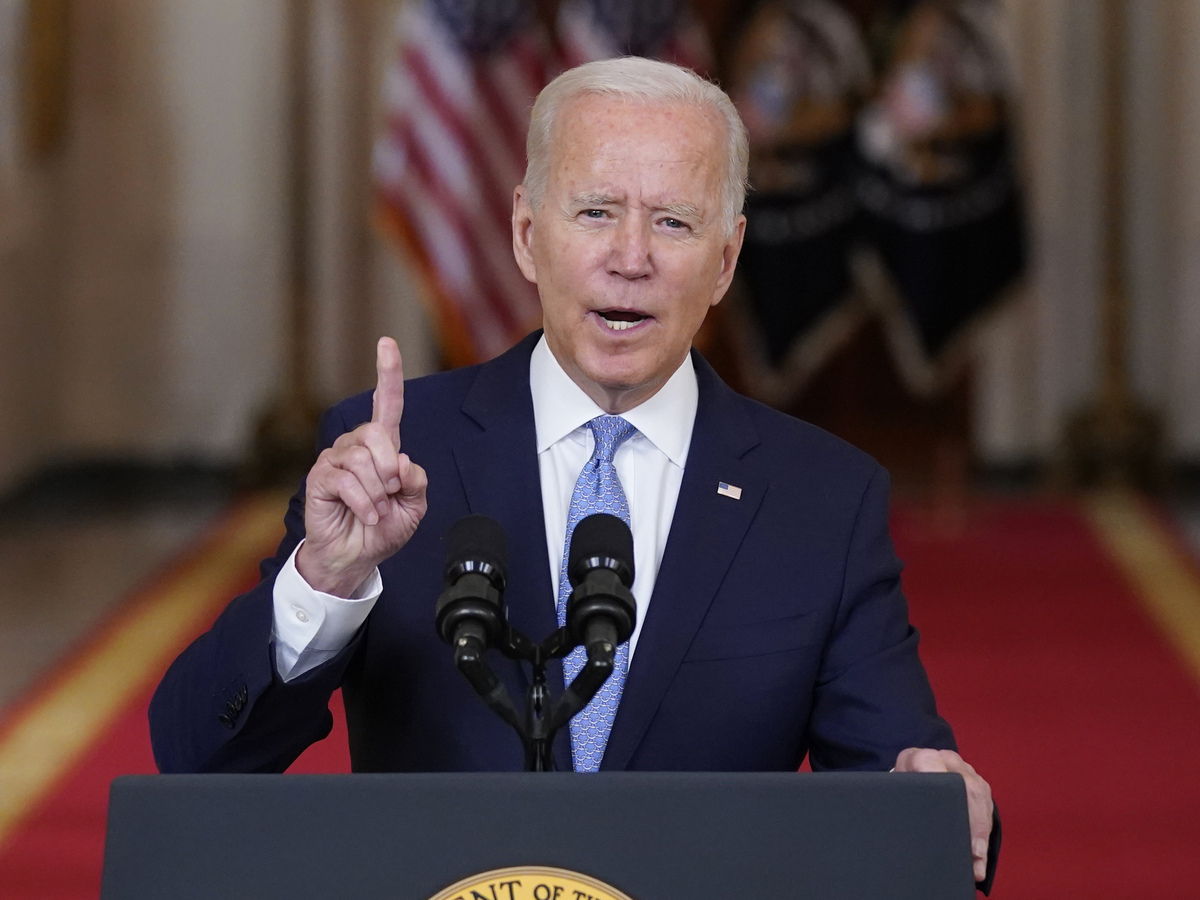 President Biden, in an address about the end of the war in Afghanistan on Aug. 31, said it was no longer in the U.S. national interest to be there.

Biden has said he wants to rally the world to boost the pace of global COVID-19 vaccinations, and the White House has planned a virtual summit on the topic for Wednesday, to coincide with activities at the U.N.

The administration has faced criticism for its preparations to give Americans a third booster shot even as millions of people in the world’s poorest countries are still waiting for an initial dose. The World Health Organization and other groups have urged the United States to hold back on broad plans for booster shots, arguing that other countries need the vaccines more. The White House has pushed back, countering that the U.S. has enough doses to vaccinate Americans even as it donates more doses than any other nation.

Biden’s speech to the U.N. may give him the opportunity to “reset the agenda” with countries concerned about the U.S. commitment to multilateralism, said Alynna Lyon, a University of New Hampshire professor who has written extensively about the relationship between Washington and the U.N.

But they also need to be accompanied by actions and resources, she said.

“Words are pretty hollow right now,” Lyon said. “He can’t just say he wants to work with other countries. He really needs to bring in, particularly the allies, into both planning what the U.S. agenda and what the U.N. agenda could be, and also implementing it.”