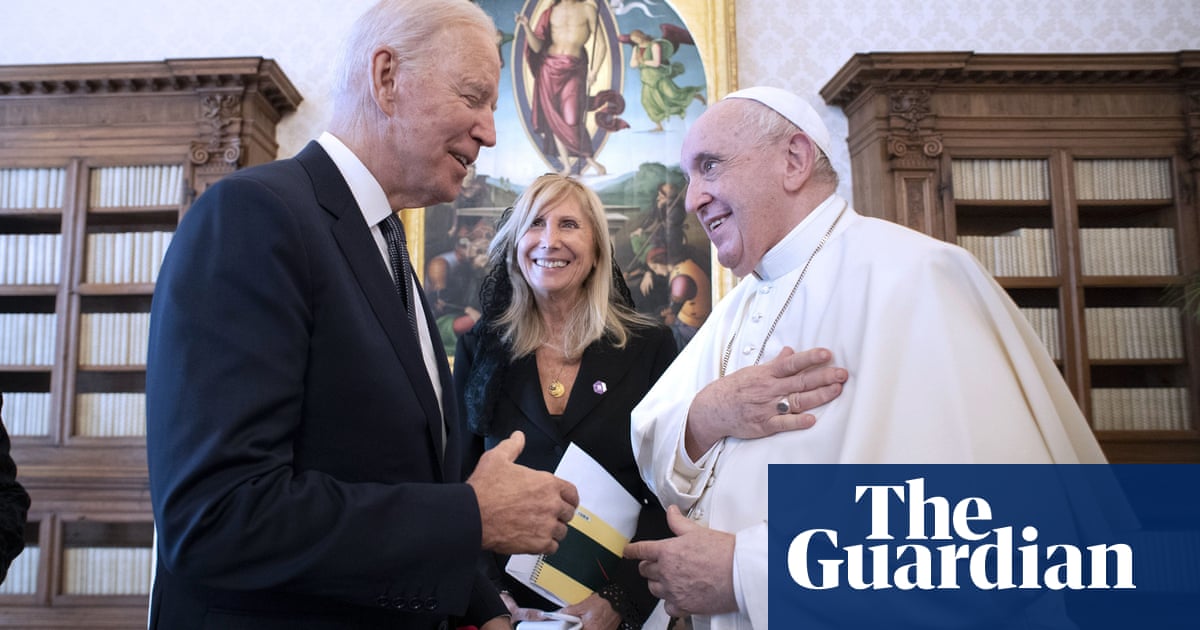 Joe Biden said on Friday that Pope Francis told him he should keep receiving communion, after holding an unusually long meeting with him at the Vatican.

Asked if abortion came up in the talks, Biden said cryptically the pope told him he was happy he was a good Catholic.

The issue was raised as debate rages in the US, where America’s Catholic bishops prepare next month to discuss whether to rebuke Biden for supporting abortion rights, as conservatives push for him to be denied communion as his political stance clashes with Catholic tenets. The pope opposes abortion.

And the US supreme court is scheduled on Monday to hear arguments about America’s most restrictive abortion law, recently put into effect in Texas, which largely bans the procedure.

Biden praised the pope for his leadership on urging climate action and greater distribution of coronavirus vaccines around the world, during the longer than expected meeting at the Vatican as the US president began a European trip before the climate summit in Scotland.

The pope on Friday urged world leaders to take “radical decisions” at next week’s Cop26 global environmental summit, in a special message recorded for BBC Radio.

He added: “Climate change and the Covid-19 pandemic have exposed our deep vulnerability and raised numerous doubts and concerns about our economic systems and the way we organise our societies.”

Biden arrived in Rome overnight, having failed to win his own party’s final agreement on his flagship legislative bills, despite announcing a “historic economic framework” before he left Washington DC on Thursday.

Biden on Thursday touted his $1.75tn plan to expand the nation’s social safety net and confront the climate crisis, though down from the originally proposed $3.5tn, as a victory for consensus and compromise that would make the US more competitive and resilient, even as the path forward remained uncertain.

He had hoped to leave the US on the back of a deal on his Build Back Better legislative agenda, but both moderate and progressive Democrats in Congress have yet to sign on and agree to final votes, despite the urging of the president and House Speaker Nancy Pelosi. Both are projecting optimism that a final deal is close.

Biden declared it’s “good to be back” as he landed in Italy and opened a five-day European trip including an extended visit with Pope Francis. The world’s two most prominent Roman Catholics ran overtime in talks expected to cover the pandemic, the climate emergency, poverty and other pressing issues.

A dozen Swiss Guards in blue and gold striped uniforms and red-plumed halberds stood at attention in the San Damaso courtyard at the Vatican for the arrival of Biden and first lady Jill Biden.

Biden introduced himself to ushers saying, “I’m Jill’s husband.” The couple met the pope in his private library for about 75 minutes, according to the Vatican, an unusually long time for an audience with the pontiff and a meeting that put Biden behind schedule for other meetings.

These include a meeting with French president Emmanuel Macron, part of an effort to mend relations with France after the US and UK decided to provide nuclear-powered submarines to Australia, scotching an existing French contract.

Biden is due to speak at Cop26 on Monday.

Biden takes pride in his Catholic faith, using it as moral guidepost to shape many of his social and economic policies.

He is the second Catholic president of the US, after John F Kennedy. Biden wears a rosary and frequently attends Mass, yet his support for abortion rights and same-sex marriage puts him at odds with many religious conservatives.

No live pictures or video of the meeting were provided due to last-minute Vatican restrictions on press access.

White House press secretary Jen Psaki, in previewing the visit, said she expected a “warm and constructive dialogue” between the two leaders.

“There’s a great deal of agreement and overlap with the president and Pope Francis on a range of issues: poverty, combating the climate crisis, ending the Covid-19 pandemic,” Psaki said.

Biden and Francis have previously met three times but Friday’s encounter was their first since Biden became president.

Fierce debate continues about Biden’s strong support for abortion rights as a politician.

US bishops are preparing to meet in Baltimore next month for an annual convention. Among the agenda items is an effort by conservatives to disqualify Biden from receiving communion.

Any document emerging from the event is unlikely to single out the president by name, but he still could face some form of rebuke.

Francis has stressed that he will not reject political leaders who support abortion rights, though Catholic policy allows individual bishops to choose whether to prevent people from taking communion.