Biden Slaps Down Move For $50K Student Debt Forgiveness: "I Will Not Make That Happen"

Biden Slaps Down Move For K Student Debt Forgiveness: "I Will Not Make That Happen"

Biden Slaps Down Move For $50K Student Debt Forgiveness: “I Will Not Make That Happen”

President Biden has appeared to give his ‘final’ and ‘definitive’ answer on student loan forgiveness at a moment progressives within the Democratic party continue pushing for much more than his planned 10,000 debt write off.

In comments early this week, he balked at the idea of forgiving $50,000 in student loan debt for some 43 million Americans, which would amount to $1 trillion canceled overnight via executive order:

“I will not make that happen,” Biden said during a CNN town hall on Tuesday night when asked if he would support cancellation of $50,000, adding that it “depends on whether or not you go to a private or public university” and that he’s opposed to saying that he was going to “forgive the debt, billions of dollars of debt, for people who have gone to Harvard and Yale and Penn.”

“I will not make that happen.”

Says he doesn’t want to forgive debts of borrowers from elite schools — and money would be better spent on early childhood education. pic.twitter.com/oDwvCJveOm

Biden further explained: “I do think in this moment of economic pain and strain that we should be eliminating interest on the debts that are accumulated, No. 1. And No. 2, I’m prepared to write off the $10,000 debt, but not [$50,000],” and underscored that such an ambitious and unfeasible number is likely outside his unilateral power to do.

Progressives led by Senators Schumer and Warren haven’t let up the pressure after months of being vocal in media interviews and press events, and earlier this month reintroduced their measure which proposed a $50,000 forgiveness per borrower.

Meanwhile the usual suspects are seeking to make it primarily a race and class disparity issue, with Alexandria Ocasio-Cortez tweeting Wednesday…

“1. Who cares what school someone went to? Entire generations of working class kids were encouraged to go into more debt under the guise of elitism. This is wrong. 2. Nowhere does it say we must trade-off early childhood education for student loan forgiveness. We can have both.” 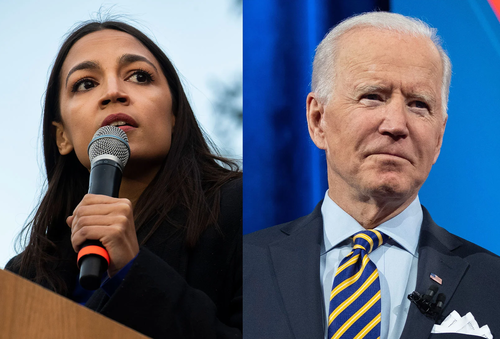 The intra-party pressures from top congressional Democrats are likely to continue, with AOC’s tweet getting a lot of media attention later in the day Wednesday.

Meanwhile the White House has maintained the line of still looking into and “reviewing legally” whether or not it’s even possible for the president to issue student debt forgiveness without congressional approval, which is another key part of Progressives’ demands.

Biden Slaps Down Move For K Student Debt Forgiveness: "I Will Not Make That Happen"