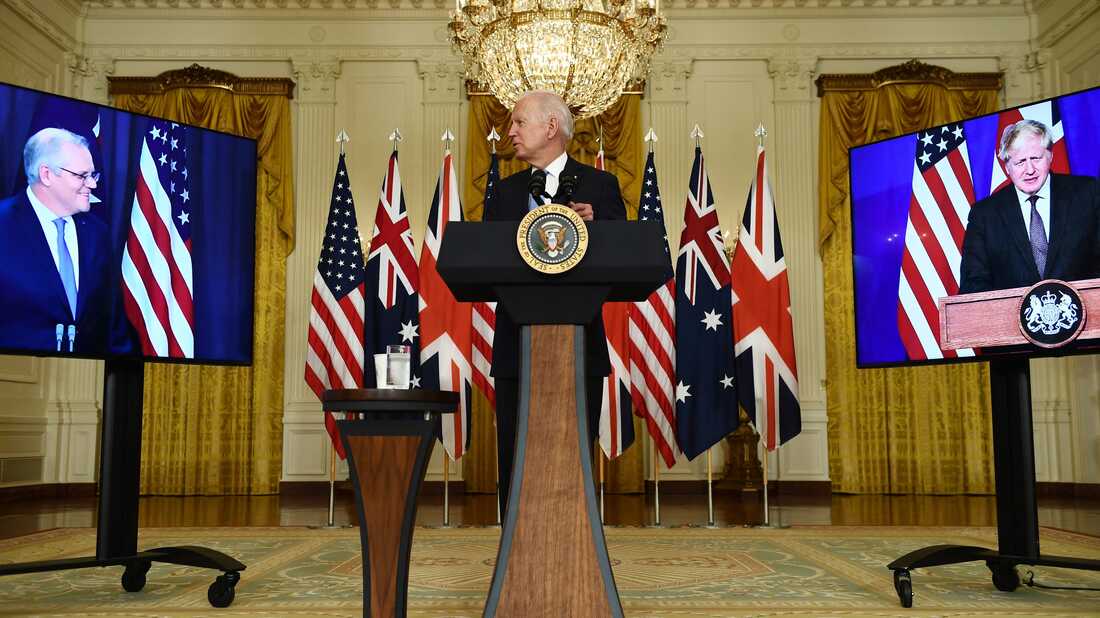 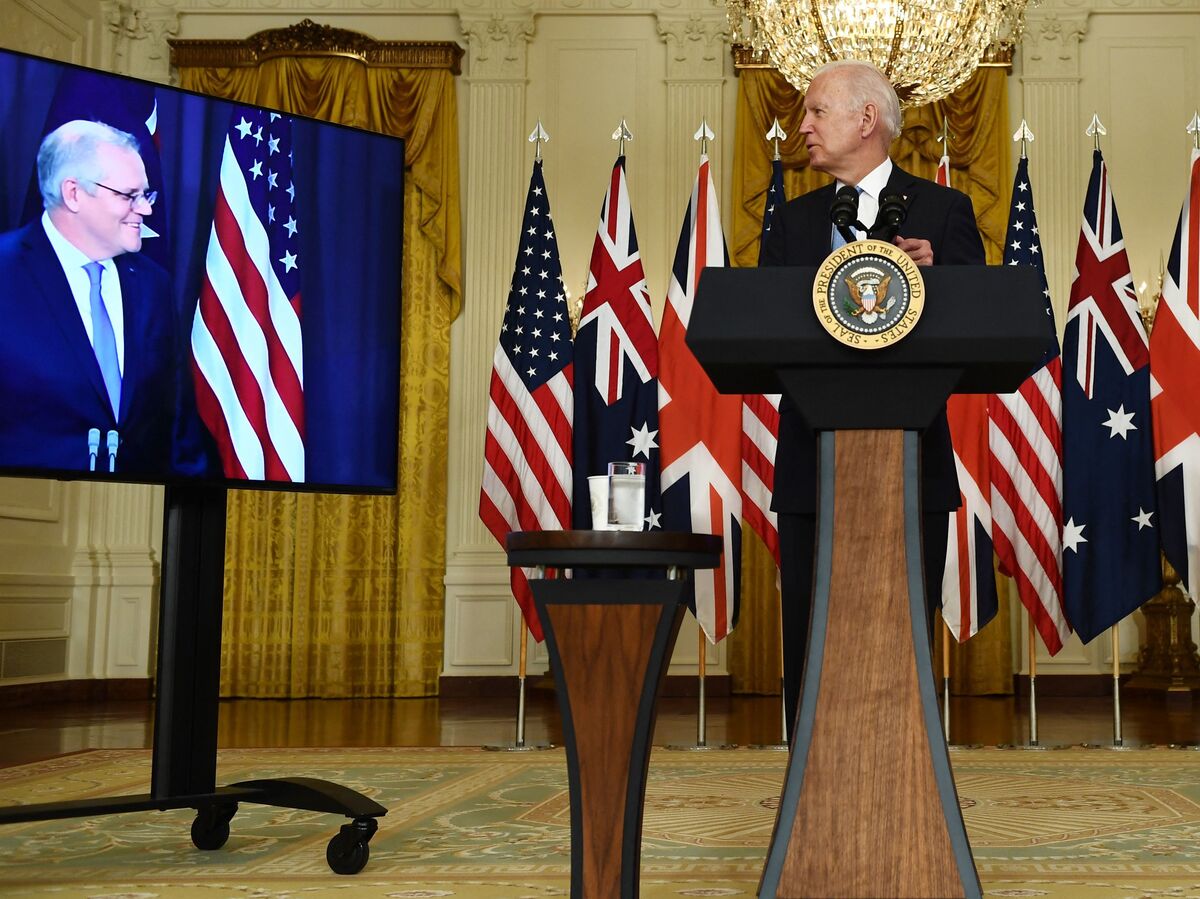 President Biden speaks to Australian Prime Minister Scott Morrison on Wednesday during the virtual announcement of a trilateral defense partnership with Australia and the U.K. British Prime Minister Boris Johnson also joined in.

In a rare step, President Biden announced on Wednesday that the United States plans to share its nuclear-powered submarine technology with Australia as part of a new defense partnership with that country and the United Kingdom.

The announcement comes as Biden tries to refocus U.S. national security and economic policy on the threat posed by China. In recent years, tensions over territorial disputes in the South China Sea — a major shipping lane with oil and natural gas resources — have escalated, with China building military outposts on several small reclaimed islands.

Biden, Australian Prime Minister Scott Morrison and British Prime Minister Boris Johnson talked about shared values and the need to secure peace and stability in the region as they appeared together, virtually, to make the announcement.

“We need to be able to address both the current strategic environment in the region and how it may evolve, because the future of each of our nations and indeed the world depends on a free and open Indo-Pacific, enduring and flourishing in the years ahead,” Biden said.

The three countries now launch an 18-month effort to determine how best to share the nuclear submarine propulsion technology, which will allow the Australian navy’s submarines to travel faster and farther, with more stealth.

The leaders emphasized that the nuclear-powered submarines would be conventionally armed.

“I want to be exceedingly clear about this: We’re not talking about nuclear-armed submarines,” Biden said. “These are conventionally armed submarines that are powered by nuclear reactors.”

It’s the first time the U.S. has shared this technology since 1958

There has been only one other time that the United States has shared what a senior administration official described to reporters as “extremely sensitive” submarine propulsion technology — more than 60 years ago, back in 1958, with Great Britain.

Morrison said the fleet would be built in Adelaide, Australia.

Johnson said the initiative would create jobs in the United Kingdom, saying the project would last for decades.

“Only a handful of countries possess nuclear-powered submarines, and it is a momentous decision for any nation to acquire this formidable capability,” he said.

The move signals U.S. commitment to the region

The Biden administration is working to move past the 20-year war in Afghanistan and the chaotic U.S. exit from Kabul. Biden has put countering China at the center of his economic and national security efforts, describing it as the biggest challenge of this era.

Ahead of the formal announcement, a senior U.S. administration official insisted to reporters that the new security cooperation with Australia was not directed specifically at China.

“I think one of the things that the United States has done most effectively in the Indo-Pacific is to secure peace and stability and to be the ultimate guarantor of that rules-based order,” the senior official said.

“Over the last several years there have been questions: Does the United States still have the stomach? Do we have the wit and wisdom that we want to continue to play that role? What President Biden is saying with this initiative is, ‘Count us in.’ “

The announcement began with a video featuring a montage of historical images, and stirring music, voiced by an Australian narrator.

“We have always seen the world through a similar lens,” Morrison said, mentioning values such as freedom, human dignity, the rule of law and the independence of sovereign states.

Biden is set to meet in person at the White House next week with the leaders of India, Japan and Australia — what’s known as the “Quad.”

He invited leaders of Japan and South Korea as the first two foreign leaders to visit the White House in person earlier this year. And his first foreign trip in June to the Group of Seven and NATO was also focused on the economic and security threats posed by China.

For only the second time since taking office, Biden spoke last week to Chinese President Xi Jinping. He did not discuss the new security partnership “in any specific terms,” the senior U.S. official said, but emphasized to Xi that the United States planned to play a strong role in the region.