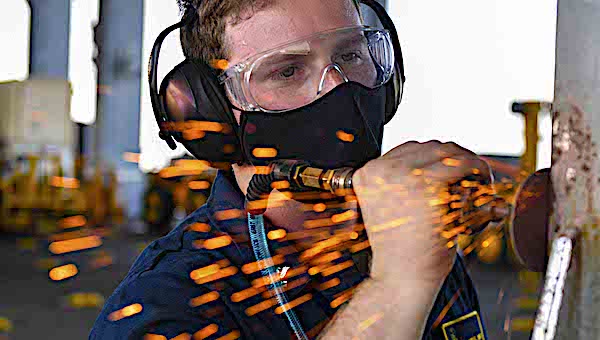 Warning lights should be flashing. Less than a month in, it’s becoming evident that President Joe Biden’s economic policies are likely to end in disaster. The wrong economic diagnosis and the politics of not letting any crisis go to waste is leading to the most damaging mix of economic policy in decades.

The administration is in thrall to the Keynesian demand-management paradigm that treats every big economic downturn as a potential replay of the Great Depression, thus requiring massive fiscal and monetary stimulus to revive demand. But the Covid slump wasn’t driven by lack of demand, but by deliberate policy decisions taken by federal and state governments to close down economic activity for reasons of public health.

For the time being, Covid policy is economic policy. The 11 states with the highest unemployment are all deep blue; they imposed some of the nation’s most draconian lockdown policies. Eleven of the 12 states with the lowest unemployment rates are red states. Thus, the pace of economic recovery will be dictated by how quickly the brakes are taken off measures to control the pandemic.

Yet in response to a deliberately engineered supply-side contraction, the Biden administration’s prescription is a $1.9 trillion stimulus. This idea drew stinging criticism from no less than Larry Summers, the former Treasury secretary, who reckons the Biden stimulus is three times larger than the projected gap in output. Together with unprecedentedly loose monetary conditions overseen by Fed chair Jay Powell, we face “the risk of inflation expectations rising sharply,” Summers argued.

As if on cue, the Fed chair stoked those expectations. “Frankly, we welcome slightly higher . . . inflation,” Powell declared last month. “The kind of troubling inflation people like me grew up with seems unlikely in the domestic and global context we’ve been in for some time,” he said – words that could well come back to haunt him should inflation take off.

We’re already seeing inflation, at least of the policy kind. During the campaign, Biden said that America faced four historic crises, but the one he wanted to talk about was the “punishing reality of climate change” (the others being Covid, the economy, and a “reckoning on race”). By the time of the White House climate change briefing on January 27, the number of crises had grown 50%. At that event, John Kerry, Biden’s climate envoy, spoke of “all six of the major crises” the president is facing (a reporter added immigration to the list, and Kerry tallied it as six). “Every single one of them is life and death.”

Kerry and former EPA Administrator and now White House National Climate Advisor Gina McCarthy were talking about the climate change executive order that Biden had just signed. “We face a climate crisis that threatens our people and communities, public health and economy, and, starkly, our ability to live on planet Earth,” the executive order proclaimed. Its purpose is to make fighting climate change the organizing principle of the Biden administration. “Climate change is the most significant public health challenge of our time,” McCarthy improbably claimed. Cutting carbon-dioxide emissions will reduce childhood asthma, Kerry suggested. “Quality of life will be better when Gina has put her team together that produces choices for us that are healthier, less cancer, cleaner air,” he added.

Soon enough, the Biden administration will face a crisis of its own making – a policy-driven jobs crisis. As Keystone XL pipeline workers are finding out, creating the jobs of the future apparently involves destroying jobs of the present. As McCarthy coyly explains, “this is all about building the jobs of the future we want, not continuing to niddle at an economy that is no longer going to be where our future lies.”

No job can sustainably pay more than the value of the output it generates without permanent subsidies. Incessantly incanting the mantra of “good-paying union jobs” doesn’t make it otherwise and can’t change the underlying economics of terminating high-productivity oil and gas jobs for low-productivity wind and solar ones. According to the American Enterprise Institute’s Mark Perry, it takes one worker in nuclear and natural gas to produce the same amount of electricity as 1.1 in coal, 5.2 workers in wind, and a whopping 45.8 workers in solar. The productivity penalty of wind and especially solar ineluctably means lower wages. “Solar jobs will be everywhere,” McCarthy said – implying that lots of poorly paying jobs will replace the high-paying ones that the administration is bent on eliminating.

The president’s executive order also states that fighting climate change will be integral to U.S. foreign policy and national security. Though regarding climate change as a dire national security threat is overblown, viewing it through a national security lens can be helpful in one respect. Like fighting a war, fighting climate change requires the deployment of vast resources to a cause yielding little or no direct economic benefit. The benefits of climate policy arise only far into the future – if they arise, for their success depends on all major economies cutting their emissions, not just the U.S. The benefits would take the form of reduced adverse impacts, not investments that generate faster economic growth and higher living standards. We sacrifice today for a less-worse future climate at some unspecified date.

The economics of fighting climate change have less in common with the Great Depression-era economics of Keynes’s General Theory, from which demand-stimulus advocates draw their inspiration, than with his 1940 tract How to Pay for the War. Keynes worried that the extra spending power put in workers’ pockets by the war effort wouldn’t be absorbed by extra production of consumer goods, leading the economy to over-heat and to runaway inflation. “Every use of our resources is at the expense of an alternative use,” Keynes wrote.

Far from being an economic win–win, climate policy is a lose–lose. Replacing energy derived from hydrocarbons with wind and solar energy shrinks the economy’s productive potential. Additionally, decarbonizing energy means that it becomes more expensive to make stuff and do things, like heating homes and powering factories. It’s why energy costs in Europe are a multiple of those in the U.S. Decarbonization is therefore an inflationary double-whammy. It shrinks the output gap as the economy becomes less productive, and by putting more wind and solar on the grid, it makes the grid more fragile and pushes up energy costs, injecting cost-push inflation into the economy.

Chairman Powell might think that the inflation of the 1970s is dead and buried. But he and the Biden administration are doing just about everything to turn the 2020s into a replay.

Rupert Darwall is a senior fellow of the RealClear Foundation and author of THE CLIMATE NOOSE.

Previous post: [ The Biggest Lies Of The Impeachment Saga ]
Next post: [ Conservative ex-mayor vows a 'California comeback' if he's chosen to replace Newsom ]