Biggest Winners From Biden's Stimulus: Middle-Class Family Of 4 Will Qualify For $12,800 Over Next 15 Months

Biggest Winners From Biden's Stimulus: Middle-Class Family Of 4 Will Qualify For ,800 Over Next 15 Months

Biggest Winners From Biden’s Stimulus: Middle-Class Family Of 4 Will Qualify For $12,800 Over Next 15 Months

While markets wait to see what the final size and scope of the proposed $1.9 trillion Biden stimulus will be, what we know currently about the key support components is the following:

As BofA economist Joseph Song explains, the big winners of the proposal will be be low to middle-income households with young children. As shown by the orange line below, a family of 4 making less than $150,000 a year could qualify for $12,800 in federal income support over the next 15 months. 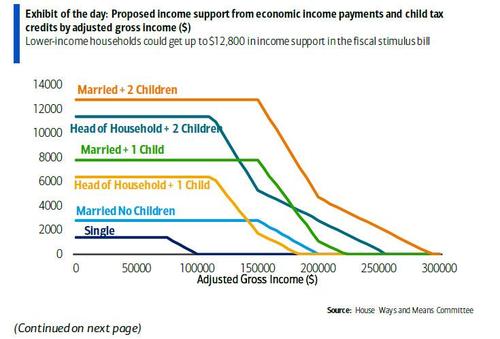 To be sure, not all of the child tax credit will be new money as the current tax code provides a $2000 tax credit per child, but the new provision is more generous in two ways:

There is of course a cost: the Joint Committee on Taxation has scored the Economic Impact Payments and the Child Tax Credits to cost around $530bn ($422bn + $109bn) which, if fully spent, would equate to roughly 2.8% of real GDP. That said, not all of the income support will be spent in the economy and reasonable fiscal multipliers would suggest a GDP boost in the range of 0.5-1.5%. Still, as BofA quipts “that’s a lot of diapers and toys.”

Expect to get more details in coming days as House Committees mark up the bill. News reports suggest that the House will aim to vote on the full legislation the week of February 22nd and then the Senate will get its turn. In any case, if these provisions survive to reach the final version of the bill – and they probably will – “the consumer will be well supported in 2021 and beyond” according to BofA.

Biggest Winners From Biden's Stimulus: Middle-Class Family Of 4 Will Qualify For ,800 Over Next 15 Months