Having made many headlines earlier in the year with his rightly apocalyptic perspective on the pandemic, billionaire hedge fund manager Bill Ackman pocketed a tidy $2.6 billion in profits on a massive (credit) hedge he placed amid stock market complacency ahead of its March collapse.

On March 23rd, we completed the exit of our hedges generating proceeds of $2.6 billion for the Pershing Square funds ($2.1 billion for PSH), compared with premiums paid and commissions totaling $27 million, which offset the mark-to-market losses in our equity portfolio. Our hedges were in the form of purchases of credit protection on various global investment grade and high yield credit indices. Because we were able to purchase these instruments at near-all-time tight levels of credit spreads, the risk of loss from this investment was minimal at the time of purchase.

Well, the founder of hedge fund Pershing Square Holdings is at it again in 2021 but instead of virus anxiety, Ackman is protecting against inflation’s impact on his book. 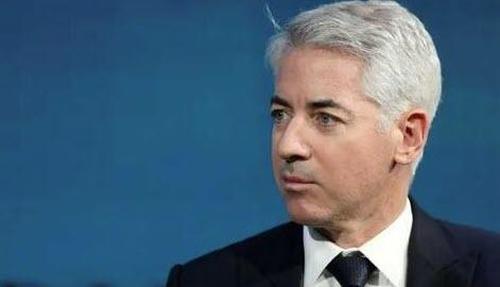 The Telegraph reports that the fund manager has identified a surprise rise in interest rates as the next big risk for markets.

“We will see a spike in inflation as early as the middle of the year,” Ackman said.

“It is already starting to happen. At some point if rates move enough than it becomes a market risk event.”

Ackman said he had bought “instruments that pay off in a large way in the event of a surprising move in rates”.

“There is a finite amount of money we can lose which is not material to the fund and if we are right on rates then we make a lot of money,” he added. “We want to protect ourselves against huge market-moving events. We look to buy insurance against disaster.”

The ‘disaster’ he sees coming is due to Biden’s huge $1.9 trillion stimulus package sowing the seeds of a surge in inflationary pressures.

“That is happening at a time when rates are zero, coupled with the psychological effects of being locked up for a year. That combination will lead to a lot of demand in the economy. Supply won’t be able to meet that demand,” he said.

Specifically, Ackman warns that a continued rise in inflation would spell more pain for investors in tech and high-growth companies.

“In order to justify the high price of high-flying tech companies you need to have enormous continued growth and eventually have them generate profits,” he said.

“The current level of interest rates mean that investors are willing to wait a long time for companies to generate lots of money. A move [higher] in interest rates is a big threat to growth companies.”

And as rates have risen recently, so value stocks have accelerated relative to growth… 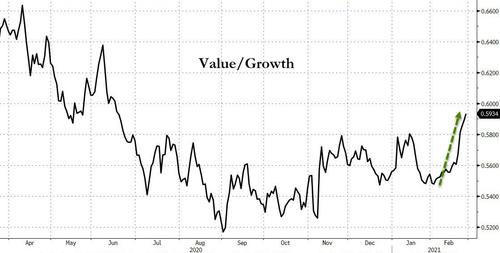 Ackman remains long stocks albeit in what he calls “more predictable” businesses – so not ultra-growth momo darlings – just as he did through his last massive (and successful) hedging program and we suspect, unlike last time when he claimed “I hope we lose money on this latest hedge”, this time, given his penchant for less-hyper-growth stocks and his comments on the asymmetric nature of the hedge payoff if the future doesn’t turn out in the panglossian manner it is priced for, he may be looking to profit both ways.

Previous post: [ Shocking racism taught in Buffalo schools to kindergartners-12th ]
Next post: [ Jon Stewart Killed ‘Crossfire’ And He Was Wrong ]