Bitcoin Hits $49,700 As Institutions Now Own 3% Of The Circulating Supply

Bitcoin Hits ,700 As Institutions Now Own 3% Of The Circulating Supply

Bitcoin Hits $49,700 As Institutions Now Own 3% Of The Circulating Supply

Less than a week after Bitcoin soared on Tesla’s announcement that Elon Musk had purchased $1.5BN in the cryptocurrency on behalf of his company, overnight bitcoin hit a new all time high just shy of $50K, rising as high as $49,700 before reversing modestly. 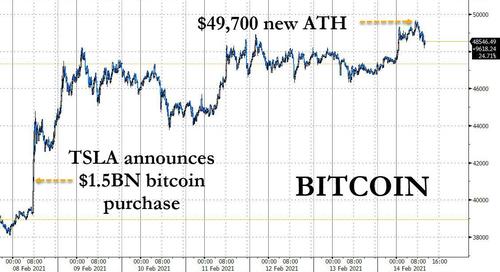 There was no specific catalyst behind Sunday’s move higher, which appeared to be the result of profit-taking rotation out of various smaller altcoins – which had soared in the past few days – into bitcoin. In other words, it now appears that retail investors are getting bored with pennystocks and instead are flooding into “pennystock” cryptos (those trading below $1.00) and other less liquid altcoins, and ramping them up before converting profits to bitcoin.

Additionally throughout the past several days, as Bitcoin’s consolidated in the mid $40,000s, analysts pinpointed the continuous increase in stablecoin inflows. According to data from CryptoQuant, a data analytics platform, the Stablecoin Supply Ratio (SSR) rose significantly as Bitcoin rallied from the mid-$30,000 region.

The SSR indicator shows the ratio of the market cap of Bitcoin relative to the aggregated market cap of stablecoins. When the price of Bitcoin rises in tandem with the SSR ratio, then it means it is likely being driven by sidelined capital re-entering the market.

Two additional reasons for the new record according to CoinTelegraph, were the clean break of the $38,000 resistance area, and a prolonged consolidation phase.

But the biggest reason for the ongoing surge in bitcoin whose next target is $100,000 is the continued institutional adoption (just as we explained one month ago in “How Bitcoin Hits $100,000 Next: Morgan Stanley Boosts Stake In Microstrategy, Opening The Floodgates“

“With each major announcement like the one BNY Mellon made, other institutions are spurred to more rapid adoption and deployment of digital assets,” Patrick Campos, chief strategy officer at Securrency, told Bloomberg on Friday.

“Tesla’s recent announcement will embolden other large corporates and institutions to accept crypto as not just a worthy asset class, but perhaps even an essential one. More important, is the corresponding build-out of institutional services to support these developments will trigger other digital assets-related developments within those institutions and in the larger ecosystem,” he said.

And while we wait for many more institutions to jump on the bitcoin bandwagon, data shows that institutional investors are already rapidly gobbling up Bitcoin, and at the time of writing, nearly 3% of the Bitcoin (BTC) in circulation are locked up in long-term holdings by these investors.

According to CoinTelegraph, 24 entities have amassed more than 460,500 BTC, which is equivalent to $22 billion at Bitcoin’s current price.

With every institutional purchase, bitcoin’s float is shrinking

Large holders reduce the circulating supply by buying significant quantities from the market and placing them in cold storage. This long-term holding culture among most crypto participants reduces the already small supply, creating a vicious circle. For savvy chief financial officers, having a portion of Bitcoin’s treasury provides some regulatory hedge and arbitrage as governments cannot freeze funds.

Picking up on what we first said in late 2020, analysts now expect that holding Bitcoin in treasury will soon become a corporate standard as there are multiple technical reasons for viewing Bitcoin as an inflation hedge.

While in the past, buying Bitcoin may have been viewed as an incredibly bold move, but now it’s becoming common sense for institutional investors. With about a rough estimate of $10 trillion of corporate treasury worldwide, even a 3% allocation into BTC represents $300 billion, which is about a third of Bitcoin’s aggregate value in liquid cash.

Considering that over 60% of the Bitcoin supply hasn’t moved in more than a year, a $300 billion inflow is nearly unimaginable for an asset with a $355 billion free float. Moreover, newly minted BTC by miners adds up to 341,640 annually, a mere $16.3 billion. Therefore it is safe to conclude that the steady allocation of BTC to corporate treasuries could more than double the current price of Bitcoin.

Bitcoin Hits ,700 As Institutions Now Own 3% Of The Circulating Supply