‘Black is Blessed’: the Biblical, inclusive art of Laura James 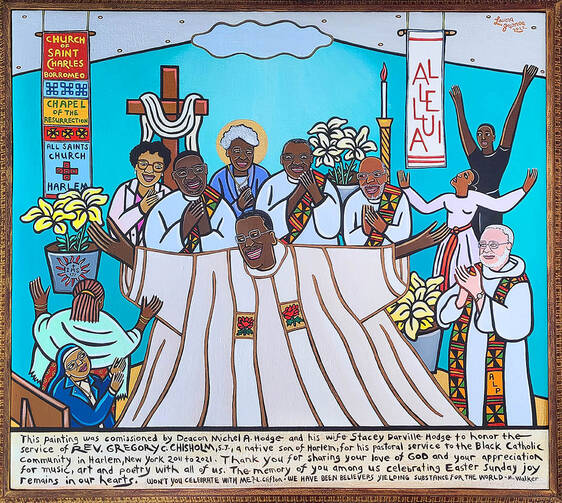 Laura James was walking through her neighborhood in Bed-Stuy when she spotted a book about Ethiopian Christian art in a store window. “Hey, I could do that,” she thought to herself, and she picked up a paintbrush. It turns out, she was right. She sold her first painting within the year.

This sense of fearless exuberance is on full display in her current exhibition “Black is Blessed: The Art of Laura James” at The Sheen Center for Thought and Culture. The exhibition is a retrospective of James’s religious work, which draws from the Ethiopian Christian tradition and features biblical scenes with an emphasis on representation and inclusion.

Laura James’s fearless exuberance is on full display in her current exhibition at The Sheen Center for Thought and Culture in New York.

I met Laura James outside the Sheen Center in New York’s Greenwich Village on a rainy Friday morning in February. She was carrying a coffee and a breakfast sandwich, bundled up against the cold in a gray coat. The ground was beginning to ice over and we admitted, somewhat sheepishly, that we had both considered rescheduling. As she led me into the tiny gallery, the shock of vibrant color and movement gave me a momentary sense of vertigo. I had to catch my breath before focusing on the canvas in front of me.

In “Called By Name,” Mary Magdalene, wearing bright orange, stands in front of a green hill. Angels in deep blue robes watch from the tomb as Christ and Mary laugh together on the road. She has just learned of his resurrection, and their joy is palpable. They are two friends separated by tragedy and reunited by grace. They are also both Black, as are all the figures in James’s art.

We took a seat on a bench and spoke about the artist’s work, her faith and her mission.

Below is an edited version of our conversation.

You divide your art into two categories: sacred and secular. Are there occasions in which they overlap?

They are distinct in my mind. Secular art is basically just not religious. Sometimes I will do a painting in the Ethiopian style that is not a typical icon. I did a series called “American History,”which showed enslaved people in that Ethiopian Christian art style, so that was a crossover.

You often talk about spending your free time as a child at the Brooklyn Public Library. What did these unstructured hours teach you about discovery?

That’s an interesting question. First of all, if you’ve never been to the Main Branch of the Brooklyn Public Library, it’s a fantastic place. My parents were very strict, so we couldn’t go anywhere, but we could go up the block to the library. The gold outside of the building, the reliefs of the mythical characters. It was just magical from the time you approached the building to the time you went inside. We started out in the children’s section, then graduated to all of the floors. Google be damned. You can learn anything at the library. We would constantly be borrowing as many books as we could. And what happens then? You learn. Whether it was art, photography, science, anything. It was wonderful. Wonderful, wonderful, wonderful.

Is that where you first encountered Ethiopian Christian art?

No. I’ll tell you my story. We went to a Brethren Church growing up. My people are from Antigua, and missionaries from Germany and England brought the Brethren tradition there. They were into reading and interpreting the Bible just the way it is. No music other than a piano, no pictures on the walls. No art. It was boring. But my sister and I had these children’s Bibles that had very fantastical pictures. Jesus was always blond-haired and blue-eyed. He totally stuck out like a superhero. It was weird. That really impressed me as a child.

I completely follow and believe in Jesus’ mission of getting people together and realizing that we are all the same people.

Then one day, I was walking in my neighborhood in Bed-Stuy, and there was a store that had this book in the window called Ethiopian Magic Scrolls. There were nine angels painted in a grid. The art was very colorful. There were Black angels!I was very interested in photography at the time, but I looked at this and I was like “you know what? I’m going to do this.” And that’s what I did.

So you gave up photography and started painting, just like that?

The Ethiopeans believe these images have been passed down from time immemorial, from the angels themselves. The priest would paint them just like this. So I figured, I would do it just like that too. It’s not bad for me to copy them, because that’s the whole tradition. I’m in the tradition. Very quickly I started to do my own thing. I like stories, and the Bible is full of stories. So that was my first inspiration.

Do you still consider yourself part of the Brethren Church?

No. I had a really crazy relationship with the organized church. It wasn’t very welcoming growing up. It was a church with all these Black people, but it seemed almost anti-Black. You’re supposed to deny everything. Deny that we’re all black, but Jesus is blond with blue eyes. Deny that you don’t really understand what the preacher is saying, but you’re supposed to. I felt like it wasn’t for me.

But later in life, after doing this work and having people tell me how meaningful it was for them, it actually helped me get back to God.

Do you believe inclusive artwork can be a vehicle for spiritual healing?

Yes, absolutely. That’s what I got when I saw that book. Something clicked for me. This was different from what I grew up with. It was spiritual healing, one hundred percent.

Although this message is from two thousand years ago, we have not even come close to getting the message. It’s a constant struggle.

I can say that I’m a Christian, because I completely follow and believe in Jesus’ mission of getting people together and realizing that we are all the same people. We’re all from the same source. We’re all divine. Love one another. Take care of one another. Treat people like you want to be treated. Although this message is from two thousand years ago, we have not even come close to getting the message. It’s a constant struggle. This is something that we have to promulgate.

You have a series of four paintings about Mary Magdalene. Can you talk about how her story is relevant today?

This series was commissioned by a woman named Rita L. Houlihan. She’s taken it as her mission to commission artwork of Mary Magdalene in the way that she was described in the Bible, particularly in the Gospel of John. This is not the way that she has come to be known. Some archbishop wrote that she was a prostitute, but that’s not in the Bible. So she’s taken it as her life’s work to reimagine Mary Magdalene’s story and to do it with art, because art really helped to put her in this subservient, denigrated role in the first place.

There’s so much affection between Mary and Christ in those images. That’s really important. You’ve also put her in the room at Pentecost, which is often portrayed as only men.

It’s not just about Mary Magdalene. The women were there from the very beginning. The Bible says that. It says that the women came up with Jesus from Galilee. They supported him, with money even. They were not prostitutes. So, I wanted to be able to show the women and the men. Because we’re all actually equal, and we have to remember that. Until we get that message, we’re not going to be able to move forward. It’s still not right, but we’re getting there. We have to consciously try to push things forward.

That brings me to another painting I really want to talk about, “Sermon for Our Ancestors.” You’ve painted the Sermon on the Mount in the middle, with the enslaved people in chains around Jesus. On the sides, you have all of these images from slavery. Can you talk a little about the inspiration for this piece?

Okay, another story. I knew I wanted to paint a Sermon on the Mount. Then, I started to read it. As I was reading, I realized that I could picture enslaved people in each of these scenes. Very easily. Blessed are the meek, blessed are those who mourn. It wasn’t a big stretch.

The middle picture is Rejoice and be glad, because your reward will be great in Heaven. People who don’t appreciate the Bible might hear that and say, “Oh, they just want to keep us down. This is just a thing to keep us in our place.” But the fact is that this story, this message, is for all human beings. Our reward is there too, whether you think it’s a place in the sky, or it’s a place on earth, or it’s a state of mind. We are entitled to this. So it was very easy to show this image of Christ, with his hands outstretched, and show the enslaved people moving towards him with the City of Gold in the background. It’s just all there.

There are some hard things here, too. People getting beaten, a rape scene. There’s a lynching, for crying out loud. But it breaks it down into bits and pieces, so people can take a little at a time and come away feeling there is hope. The Beatitudes fit really well to make this story. From enslavement to rejoicing. I’m happy that I was able to do that. I believe this is one of my best paintings. I love it, actually.

You have another Sermon on the Mount here that is very different.

After I painted “A Sermon for Our Ancestors,”I was like, “Well, I still want to do a Sermon on the Mount.” So I did a more typical scene with Jesus with his outstretched arms and a crowd around him. I like crowds. I love that painting as well.

Is there any other piece you’d like to talk about today?

This one over here. It’s called “Joy in Motion.”It’s Father Chisholm, a Jesuit priest, at Easter Mass. It’s the last commission I received from two parishioners of his. He was a priest in a church in Harlem, St. Charles Borromeo. It’s a memory they had of him dancing into the church on Easter Sunday. They actually showed me a video of him doing this. It was just so beautiful. It actually took me a while to get that spinning. We’ve got his grandmother in the background, who was very instrumental in his life and in his becoming a priest. She’s passed away, so she’s got her halo. All of these are people from the Harlem community. It’s kind of simple, but it really captures something. It’s all good.