Authored by Bill Blain via MorningPorridge.com,

“Smuggling guns and arms across the Spanish border….”

I am more and more convinced it’s time to buy UK Plc.

There is nothing we Brits like as much as talking ourselves down. The stories of rotting fish, Irish threats, and lorries stuck on the border, have convinced us we’ve made a right Horlicks of Brexit and doomed our economy for eternity by closing the door on Europe. We’ve been hit hardest by Covid deaths. The UK economy has apparently been battered worse than any other by lockdown shocks. It’s no wonder the FTSE is the worst stock market index on the planet… at least that’s what it feels like.

Damn the torpedoes and all that crap. Just as it feels darkest… it’s time to put yer buying boots on. Let me give you a different perspective. 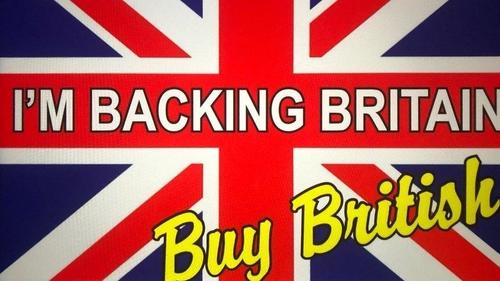 Follow Global Trade: y’day I was watching out the window of our office overlooking Southampton Water, leading into one of the biggest ports in the UK, as one of the largest container vessels on the planet was departing fully loaded to parts unknown. As it went out there was another big container ship was coming in. I’ve noticed a larger than usual number of deep-laden car-transport ships heading out to export markets – deep to the plimsol line because they are full of UK built cars.

Let’s try think this through. How bad is Britain – really? Clearly the big issue is the pandemic. Brexit is the second. Scotland a third. What if we are over-estimating the negativity of all these things? There are good reasons to think we are. Remember Blain’s Market Mantra No 4: Things as never as good as you hope, but never as bad as you fear.

The political tide is turning. It’s fascinating the frontpage of the Boris’ leaning Torygraph starts with “Rishi Sunak concerned scientists are “moving goalposts” on Covid Lockdown”. Who would have thought the Chancellor, who has only been in politics such a brief time, would prove so deft at it: reacting to the changing sentiment in the country towards lockdowns, the growing frustration with the “saving the NHS at any cost” anti-economic science, balanced against the imperative of reopening the economy to save jobs, businesses and the tax base. He’s spotted this is the moment for recovery and to release the economy… (Imagine I just said that like: “release the Kraken!”)

Let’s start by thinking logically about the Coronavirus.

There is great news. The UK has achieved over 10 million vaccinations. Analysts think the UK numbers are set to dramatically improve as infection rates tumble: the time lag means hospital admissions and deaths will collapse over the next two weeks even as vaccinations are completed for the vulnerable in society (by mid-Fed.) The data on the effectiveness of the vaccines in preventing severe illness and transmission/infection are very promising. There is a realistic chance of limited lockdown easing in March.

It feels like the sun has just flashed over the horizon after peak miserableness and despair. We are about to get insanely happy again. There is going to be such an outbreak of repressed spending we’re going to see a screed of apparently distressed stocks and bonds soar higher.

There will be some obvious upside plays to garner upside from recovery; Sleazy Jet, distressed cruise liners, Artisan Coffee shops, and more prosaically; Greggs. (Some may say the delicious-but-oh-so-naughty Northern hi-fat treat purveyor is the cockroach of the high street; the most likely survivor to emerge from a nuclear holocaust – but that’s pretty much what has happened.) It might be time to sell Games Workshop on the basis spotty boys will be forced back to school and stop playing Warhammer.

Even more importantly, over the next few months I reckon we’re going to figure out some key relative facts about the UK. Maybe… it’s not nearly as bad as you think.

The accepted wisdom is the UK has been clobbered as the worst hit nation in Europe in terms of death and economic damage, while Brexit makes the economy look terminal relative to Europe, and will trigger the disintegration of Union. For all these reasons – Sell UK.

But are any of these true?

Even the Government (who looked intent on scare us to death every evening) admit the UK has probably inflated our own numbers and damage done in comparison to everyone else.

The economic damage to the economy is less than we think. A publication: “International comparisons of GDP during the Pandemic”, written by the Office of National Statistics, no-less, highlights :“The UK has experienced the largest fall in volume or “real” gross domestic product (GDP) over Quarter 1 to Quarter 3 2020 of the G7 economies, reflecting the effects of the COVID-19 virus itself, the imposition of public health restrictions and voluntary social distancing to contain its spread; on the other hand, the current price or “nominal” UK GDP fall is broadly comparable to G7 economies and saw a lower fall than Canada, Italy and Germany.”

Do read the whole report – but basically it says we count things in a different way. As we all know; there are lies, there are damned lies, there are statistics and there are government statistics. While there has been a contraction, the impact is less than it looks on a relative basis.

And was our handling of the virus worse than every other country?

Our numbers are the second worst in terms of numbers per million. But while the UK Government has used high numbers as the whip with which to terrify the nation into accepting lockdown to save burdening the NHS, other nations haven’t adopted similar standards. Some say we still undercount the numbers – that they are even worse. But the reality remains.. the massive majority of deaths are the elderly over 70. Tragic as every death is, from an economic perspective many of the people who died were going to die soon anyway. Brutal, but fact.

As I noted months ago – from the 2000s the UK successfully reduced the number of deaths due to cancers and heart-disease by some 20%. But people don’t live better. Lower heart attack deaths meant a 20% increase in the numbers dying from dementia. It’s also clear we don’t count our death in same way as other countries – some don’t count deaths in care homes, not all are as willing to subscribe any unexplained death to Covid, nor is there the same presumption that every death within 28 days of a positive death was due to Covid.

I suspect the reality is either the UK has counted our Covid deaths more diligently than other countries, or that they have been undercounting.

What actually matters is the success of the UK Government is combatting the virus. Sure, mistakes were made. One of my mates was touch and go for a couple of days after he caught it from his daughter on the 25th of Dec. But, what would the additional damage from cancelling the feast have been?

Then there is Brexit. Read the Guardian (the UK’s left-wing remoaner journal of record) and we’ve committed Economic suicide. The Torygraph blames Europe for all the ills. There is balance between them. It’s clear – as illustrated by Andreas Dombret’s article “An equivalence “deal” for the City and EU is doomed to fail” (in which he proposes the UK pragmatically surrenders and accepts all EU market supervision and regulation) – there is still widespread market division and concern.

Post Brexit was never going to be easy. There is a distinct sense the EU is punishing the UK. The blame for fish rotting on the docks, for shortages and delays, for UK shellfish being permanently banned from Europe, are all laid at the Brexiteer’s feet. Look what we have lost – scream the remoaners. It’s clear it was less than a fully thought out deal. Many believe the deal hammered out over Christmas may well collapse and the UK and EU will trade on WTO terms.

On the other hand, it looks like there is a distinct element of envy in what the Europeans are saying about the AstraZeneca-Oxford jab’s effectiveness, (and y’day the Swiss did not give it approval). I’ll trust the UK data on the basis most of vaccine science has been pioneered here in Blighty ever since Edward Jenner stuck a needle into a cowpox pustule. Europe would rather paint the UK’s vaccine success as a dangerous outsider, putting the UK’s vaccine into the same bracket as Russia’s Sputnik.

And if the UK is a basket case.. what about Europe? Its problems have a special quality all of their own…

The overriding theme in Europe today is the stalled vaccination programme. It’s been riddled with errors and is at least a month behind. It will be solved – but VDLs failings and dither highlights the dangers of handing sovereignty to Brussels. That’s a fact anti-EU parties across Europe will latch onto through the coming electoral cycle.

The big news yesterday was Mario Draghi, a man with zero experience of standing for election, being appointed to build the new Italian government as prime minister. We’ve seen this movie before. He has one-year tops I reckon.  Draghi is the consummate EU insider – the skilled ECB president who saved the Euro. His appointment will will greatly relieve France, Netherlands, Finland, Germany and the rest about where their money is going; the €200 bln from the EU recovery scheme everyone thinks is going to turn-around and restore Itay.

Nope. It won’t. No matter how much or whom the EU throws at Italy, it won’t overcome the internal dissent or fractured Italian politics. Not for one moment am I suggesting Europe and the Euro are on the verge of collapse again because Draghi has been appointed – he’s the least bad solution to a hopeless situation – but it ultimately solves nothing. Southern Europe is uncompetitive and doomed to recession because of the Euro, and the bureaucratic mission creep in Brussels offers member nations little upside. If domestic governments can’t do it, why should a faraway Brussels do it any better? – as the vaccine farce demonstrates.

In contrast, the UK is about to bounce out of the Pandemic to discover its… actually done rather well. Trade with Europe will remain a handicap and hurdle – but that bites both ways… and may change sooner than we think.

Previous post: [ Independence Could Be A Costly Proposition For Scotland ]
Next post: [ Global Vaccine Timeline Stretches To 2023 ]