With all pretense that central banks don’t do everything in their power to push stocks higher having long ago been steamrolled by their own actions, on Wednesday Japanese Prime Minister Yoshihide Suga defended the Bank of Japan’s buying of equity ETFs in parliament, saying the policy isn’t aimed at lifting stock prices, which is funny because that’s precisely what it is aimed at.

It’s also probably why he did admit that higher equity prices (with the explicit support of the BOJ) benefit Japan’s wider population, especially by helping the performance of pension funds including the Government Pension Investment Fund, Suga said.

The prime minister was responding to criticism from an opposition lawmaker that rising share prices only benefit the wealthy; and while Suga acknowledged that inequality is growing in the domestic economy – facilitated by the BOJ’s own actions – he said the government’s third extra budget is helping, although it wasn’t clear where considering the ongoing collapse in Japan’s nominal wages. 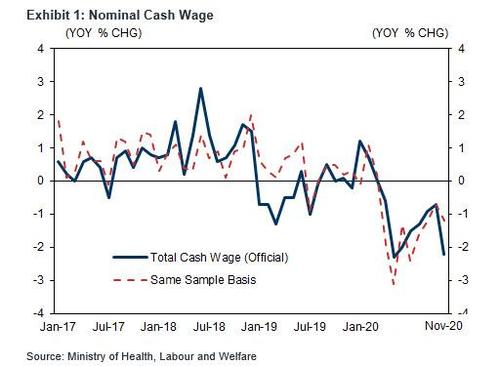 Despite Suga’s disingenuous attempts to deflect from what is the biggest topic of the millennium – namely central banks distortions and manipulation of capital markets – the growing concerns about the BOJ’s aggressive ETF purchases had an impact and on Thursday, Reuters reported that the Bank of Japan may replace some numerical guidelines for its purchases of exchange-traded funds with a pledge to ramp up buying when markets become volatile, three sources familiar with its thinking said.
The change in policy – which would be similar to shifting from fixed forward guidance to more fluid, contingent regime – would allow the BOJ to more flexibly slow purchases when markets are stable, while “reassuring investors” it will step in forcefully when shock events trigger turbulence.

While there is no consensus on the final decision, the idea is among options being floated within the BOJ ahead of a review of its policy tools due in March amid growing pushback.

“To make the BOJ’s policy sustainable, it needs to avoid buying too much ETFs when doing so is unnecessary,” another source said, a view echoed by a third source.

Which of course is a funny “concern” to emerge now, after a decade of non-stop ETF purchases with the BOJ currently purchasing up to 50BN yen in ETFs every other week, after peaking at over 200BN during the March crisis. 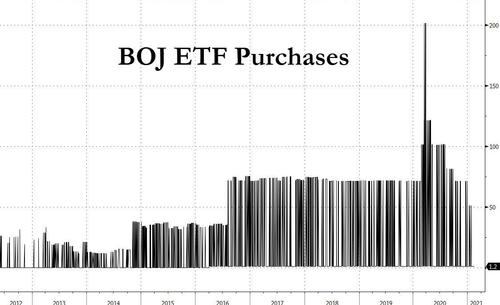 The BOJ will conduct the review of its tools at next month’s policy meeting to make its massive stimulus program “more sustainable and effective,” as the COVID-19 pandemic heightens prospects of a prolonged struggle to reflate the economy.

The BOJ now pledges to buy ETFs at an annual pace of roughly 6 trillion yen ($56.7 billion) and by up to 12 trillion yen, a commitment that forces it to keep buying even when stock prices are booming, if keeping bulls quite happy.

Yet in a curious reversal to years of policy, many BOJ policymakers now want to make the ETF-buying program more nimble, so it can buy smaller amounts or even stop buying when markets are calm, the Reuters sources said.  Some are warming to the idea of removing the 6-trillion-yen target or the 12-trillion-yen ceiling, a move that would give the BOJ a free hand in slowing purchases, they said. Others, however, are worried that taking out the numerical guidelines could scare investors and trigger a stock market sell-off at a time many Japanese firms close their March fiscal year-end books.

Because clearly a stock market without explicit central bank support is simply not acceptable.

To ease fears, the BOJ will seek to clarify that it would phase out purchases in non-crisis times, so it has scope to buy aggressively when markets turn volatile.In any case, the central bank will look at various ideas before reaching a final decision at the March 18-19 policy meeting, which could be swayed by market moves at the time, they said.