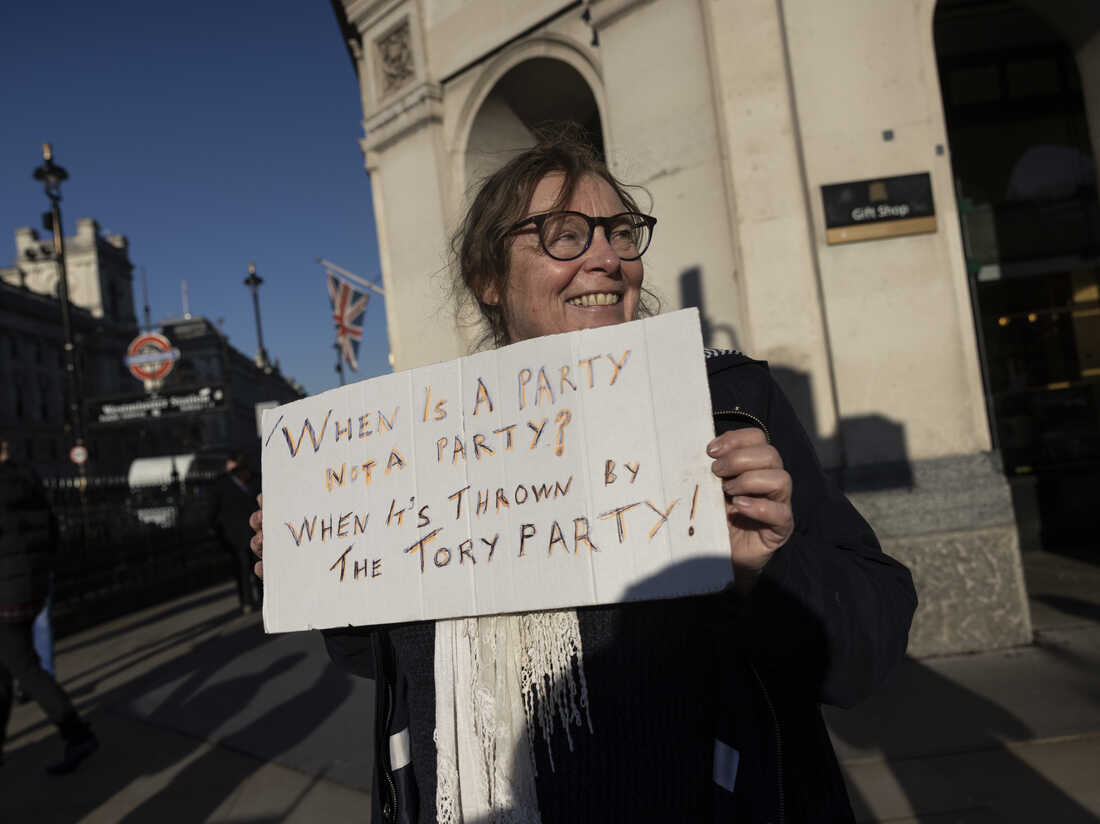 A protester holds a sign outside of Parliament in London after the weekly Prime Minister’s Questions session, in which Boris Johnson said he joined staff for an outdoor party at 10 Downing Street in May 2020. Dan Kitwood/Getty Images hide caption 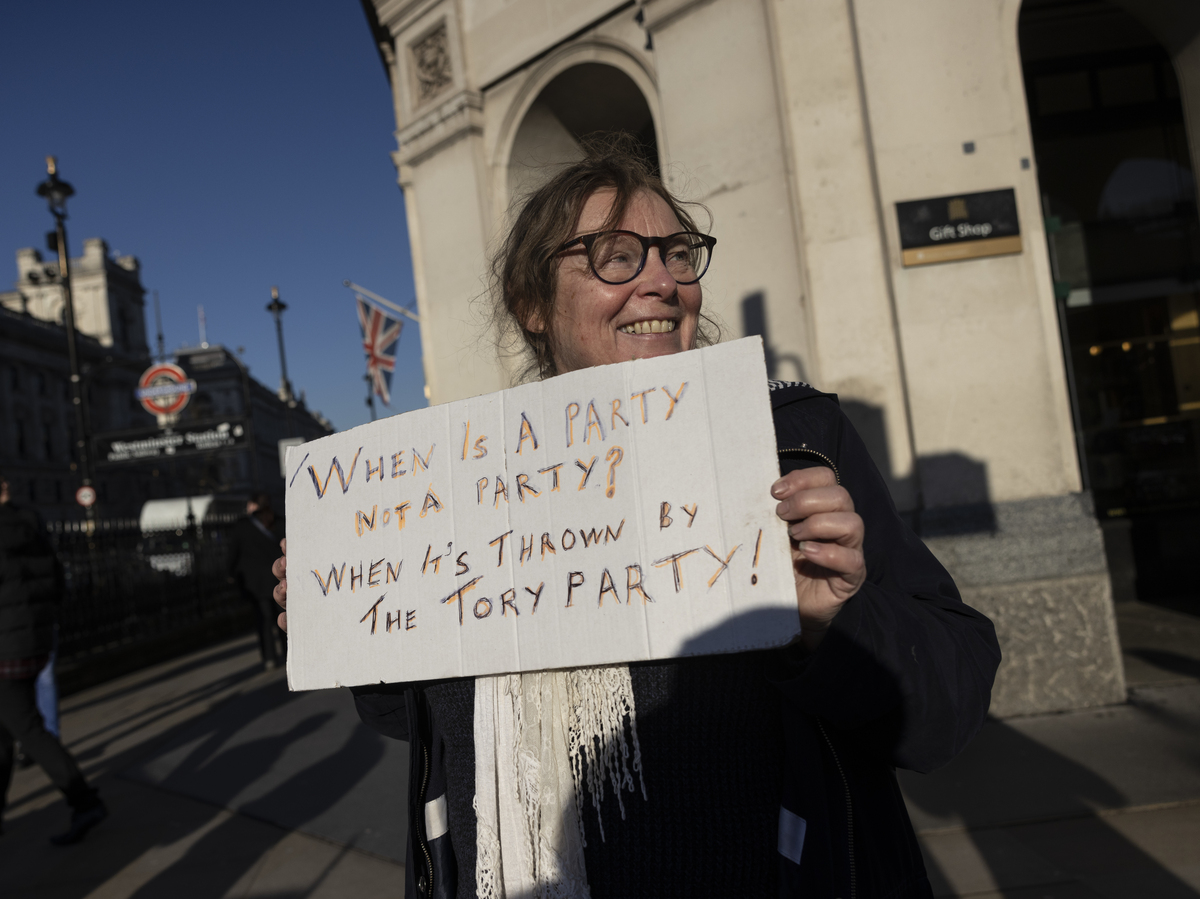 A protester holds a sign outside of Parliament in London after the weekly Prime Minister’s Questions session, in which Boris Johnson said he joined staff for an outdoor party at 10 Downing Street in May 2020.

British Prime Minister Boris Johnson is apologizing for 10 Downing Street, his official residence, hosting a happy-hour party in May 2020, when the rest of the country was under a strict COVID-19 lockdown. For the first time, Johnson said he was at the party — but the admission didn’t appease his rivals, who called it one more reason for him to resign.

“I want to apologize,” Johnson said at the start of his Prime Minister’s Questions session in the House of Commons. He acknowledged that the outdoor gathering took place as many Britons were making painful sacrifices during the pandemic.

“I know the rage they feel with me and the government I lead,” Johnson said, “when they think that in Downing Street itself, the rules are not being properly followed by the people who make the rules.”

Johnson said he “attended” the 6 p.m. party, implying he did not host it. He repeatedly said he believed it to be a work event.

“Well, that apology was pretty worthless, wasn’t it?” Labour Party leader Keir Starmer said in response. He said Johnson’s defense seems to be that “he didn’t realize he was at a party.”

“Is he now going to do the decent thing and resign?” Starmer asked repeatedly during the session.

The party occurred on May 20, 2020. An email invitation from Johnson’s private secretary, Martin Reynolds, concluded, “bring your own booze!” It was sent to more than 100 people, according to ITV, which first published the email.

“I bitterly regret it and wish that we could have done things differently,” Johnson said on Wednesday.

Johnson said he went to the event “to thank groups and staff before going back into my office 25 minutes later to continue working.”

“Everyone can see what happened. It started with reports of boozy parties in Downing Street during lockdown. The prime minister pretended that he had been assured there were no parties….

“Then the video landed [of Johnson’s staff joking about a Christmas party], blowing the prime minister’s first defense out of the water. So then he pretended he was sickened and furious about parties. Now, it turns out he was at the parties all along. Can’t the prime minister see why the British public think he’s lying through his teeth?”

That accusation brought up a point of order — members of Parliament aren’t allowed to call fellow members liars. But the comment was allowed, as it deemed to refer to the public, not Starmer’s own view.

“It’s up to the right honorable gentleman to choose how he conducts himself in this place,” Johnson said in reply. “I say to him that he is wrong.”

It’s the latest public relations headache for the prime minister’s office. In recent months, British media have reported that Downing Street also hosted a holiday party in December 2020, when London and other parts of the nation were again under lockdown orders.

Accusing Johnson of months’ worth of deceit and deception over his presence at the events in question, Starmer raised another point of the rules. The ministerial code, he said, requires ministers who knowingly mislead Parliament to offer to resign.

“The party’s over, prime minister,” Starmer said. “The only question is, will the British public kick him out, will his party kick him out — or will he do the decent thing and resign?”

Johnson replied that he accepts the fact that Starmer’s objective is to remove him from office. But as he has with other questions about his office’s potential breaches of coronavirus rules, Johnson refused to go into detail, citing an ongoing inquiry by the U.K.’s Cabinet Office. That body has tasked civil servant Sue Gray to look into multiple allegations that Johnson’s office broke its own COVID-19 rules.

The Metropolitan Police said this week that it’s talking to the government about the apparent party. On the date in question, people in England were required to remain in their homes and away from others unless they had a “reasonable excuse,” such as exercising. It wasn’t until June 1, 2020, that Johnson’s government eased the rules enough to allow some outdoor gatherings — and those were limited to six people.