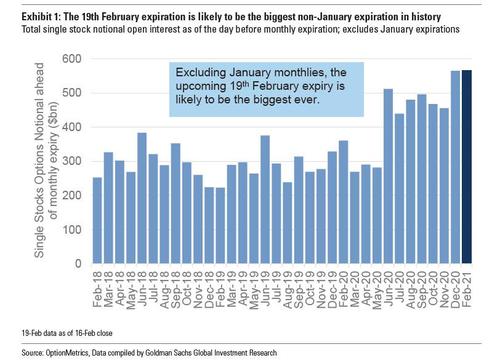 Further boosting the risk of a spike in vol today is that the S&P currently finds itself in dealer “no man’s land”: as SpotGamma explains, notional gamma levels have reduced quite a bit, with QQQ showing a solid negative gamma position, while the 4k “Call Wall” has contracted to 3950 in SPX, and holds 395 in SPY (SG sees the Call Wall shifting down as a bearish indicator).

This, to SpotGamma, reads like “a great place for volatility” (i.e. a large move up or down) to expand from, as gamma is low and the large trading strikes have consolidated to 3900-3925 while as noted above, we have a near record single stock expiration which “would could add some flows/momentum.”

Here, SpotGamma points out a curious divergence in the market – while sentiment as measured by the latest Fund Manager Survey shows near record euphoria… 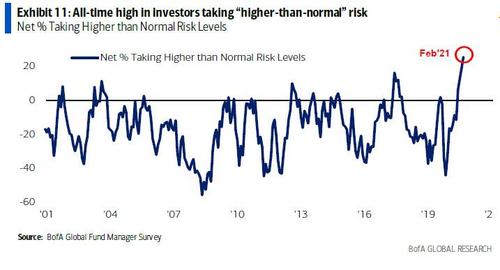 …  dealers in particular, and the market in general seems to be increasing the price of downside risk, as can be see in the chart below. These are the implied volatility (IV) levels for 25 delta options with each dot representing a different expiration. As SG explains, “the fact that put IV is increasing is signaling that traders are paying up a bit for downside hedges.” This is perplexing not only given the abovementioned euphoria, but that “the market has held such a tight range this week, just 1% under all time highs.” 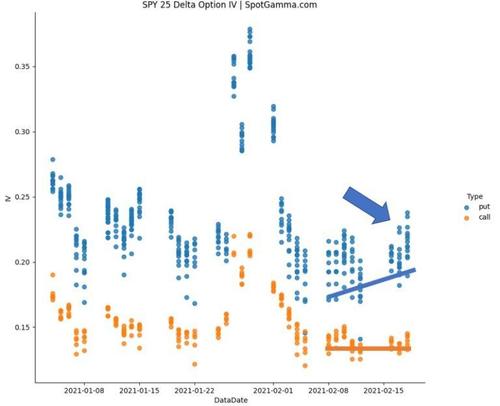 In any case, even if there is no vol spike today, SpotGamma warned that following today, following the sharp drop in gamma we do “not have the same support for those big mean reverting swings as seen the last several days.”

And just to make life for the reddit daytraders – who will be eager to ride the biggest momentum names in any of today’s gamma turmoil – a little easier, below Goldman lists the 40 stocks with the highest open interest expiring on Friday. Notably, TSLA, GME and CMG are among the large names where put open interest exceeds calls. 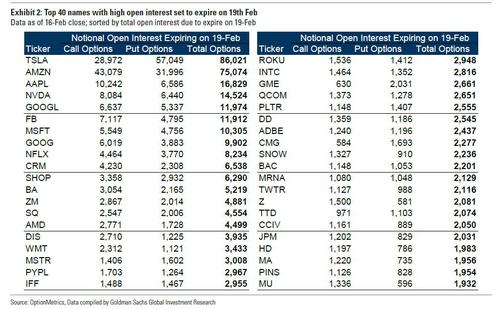