Brazil once depended on Europe for vocations. Now it sends women religious missionaries all over the world. 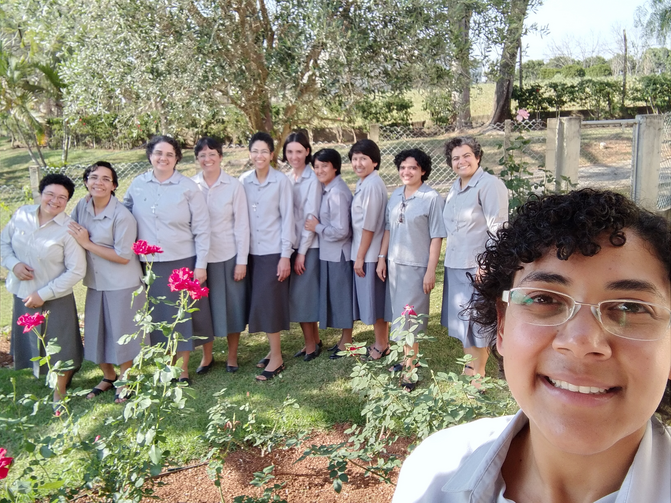 Once a mission territory itself, with a church dependent on European clergy and religious, Brazil has become a rich source of missionary vocations, with women religious comprising the vast majority of Brazilian missionaries sent abroad.

According to the most current data from Brazil’s National Missionary Council, women represent more than 80 percent of the total of Brazilian missionaries.

Besides taking up the challenge of exploring new frontiers of evangelization in Africa, Asia and Latin America, Brazilian women religious have also become evangelizers of the “old continent,” Europe, where female vocations have radically declined in recent decades.

“The situation has reversed,” Sandra Regina Amado, a member of the Comboni Missionary Sisters and advisor to the Commission for Missionary Action at the National Conference of Brazilian Bishops, told America. “Europe now needs witnesses of the Gospel and they come from the Southern Hemisphere, from Brazil, from African and Asian countries. We are the ones leaving our homes to go share the faith with these people,” she said.

Brazilian women religious have become evangelizers of the “old continent,” Europe, where female vocations have radically declined in recent decades.

As in other parts of the Americas, the first European missionaries arrived in Brazil in the 15th century, but women missionaries formed a significant presence from the 18th century on. Brazil has received different waves of migrants throughout its history, among Portuguese colonizers and African slaves in the first period, followed by Italians, Spaniards and Nordic peoples in the 19th and 20th centuries.

Missionary women from Europe followed the migrants, creating institutions to support their spiritual and educational needs and provide health care. Among the contemporary fruits of these works, which in many cases have endured for more than a hundred years, is a kick-back effect in vocations: Younger sisters are being sent to run their congregational mother houses in Europe.

As European religious congregations experience aging and diminishing numbers, they are beginning to call for capable women from around the world to fill in. The Scalabrinian Sisters are a notable case. Founded by Bishop John Baptist Scalabrini in 1895, the order sent its first four Scalabrinian sisters to São Paulo in 1897. Today, the order’s superior general is a 58-year-old Afro-Brazilian, Neusa de Fátima Mariano, M.S.C.S., who was re-elected for a second six-year term in 2019.

A fellow Brazilian, Ana Garcia, S.dP., has a seat at the Congregation of the Sisters of Providence’s general council in Rome. The order was founded in 1845 in Italy by St. Luigi Scrosoppi.

After visiting Italy several times as a Brazilian provincial superior, Sister Ana returned four years ago to serve a six-year term as counselor. She had to learn Italian and get used to colder weather to become one of the supervisors of the congregation’s global activities from its headquarters in Rome. She ended up becoming responsible for the entire motherhouse community, including its international formation center.

“We can no longer look at our religious communities in a localized way,” she said. “We have to understand that we are a global religious family, and when we go on a mission we are serving the kingdom where the religious family needs it most.”

As European religious congregations experience aging and diminishing numbers, they are beginning to call for capable women from around the world to fill in.

Out of the more than 600 religious women belonging to her congregation, 86 are Brazilian, of whom eight are permanently stationed in Italy. Brazilian sisters have also been sent to support missions in Thailand, Uruguay, Argentina and Ivory Coast. It is not clear how long that support line from Brazil can be maintained. Though vocations in Brazil are holding up better than in European countries, a drop in vocations has become discernible among the younger generations.

A member of a congregation focused on serving the poor, Sister Ana said that leaving a developing country like Brazil to go to so-called developed Europe is not a betrayal of the spirit of religious life. On the contrary, “there is no such a thing as ‘my country is the poorest.’ To see poverty, you just have to look around. There are many forms of poverty,” she said.

“Here in Italy, we have more and more people living on the streets, elderly people who are lonely and abandoned, people who need company, [who] need to be listened to, and so many children who need a family. We continue here our mission with the poor wherever we go,” she said.

Sister Sandra explained that since the Second Vatican Council the church “has understood that its action and mission in the world willed and loved by God is part of God’s own nature: to love the world in its totality,” an idea manifested in the council’s “Ad Gentes” decree on the mission activity of the church.

She believes that women contribute in particular with “their specific connection to life.”

“A woman who embraces the Gospel with tenderness and boldness does it as one who holds destiny in her hands,” Sister Sandra said. “But she also knows that Jesus Christ is the master who calls and sends her to a full life, which she shares with all humanity.”

Sister Sandra served as a Comboni missionary in Eritrea and South Sudan for 23 years, beginning in 1995. “It was an unforgettable experience, as I went from an overwhelmingly Catholic country [Brazil] to a mostly Orthodox Christian and Muslim country [Eritrea] where I learned Tigrinya, a Semitic language whose alphabet has more than 340 characters,” Sister Sandra said. From Eritrean women, she learned that “relationship, availability, and solidarity really matter.”

In South Sudan, she struggled with Sub-saharan heat and was initially treated with contempt by some men in the White Nile River region. “Once, some young men approached me sharply while I was walking on the road,” she remembered. “They asked where my car was and what I was doing there and [pejoratively] called me Chinese. I answered by gestures that I was walking and that I was not Chinese and that I didn’t have a car!

“Little by little they got used to this non-Chinese, white girl walking there. They became my friends after some time. I understood their first reaction: They were a people traumatized for a long time by wars. And, sadly, these wars still continue today.”

The encounter with different cultures illuminates life, Sister Sandra said. But being a missionary woman is more than that. “It means to be a respectful presence of listening, dialogue, tenderness and compassion, and commitment to life in Jesus Christ among all people.”

Sister Ana agreed, adding, “Brazilian women can make a big difference in Europe and in other places with their simplicity and humility, but also with the dynamism and joy that characterize us. But, at the end of the day, we are here as missionaries. We are here to witness Jesus and what he means to us.”