Building a brotherhood: A conversation with the leader of the Knights of Columbus 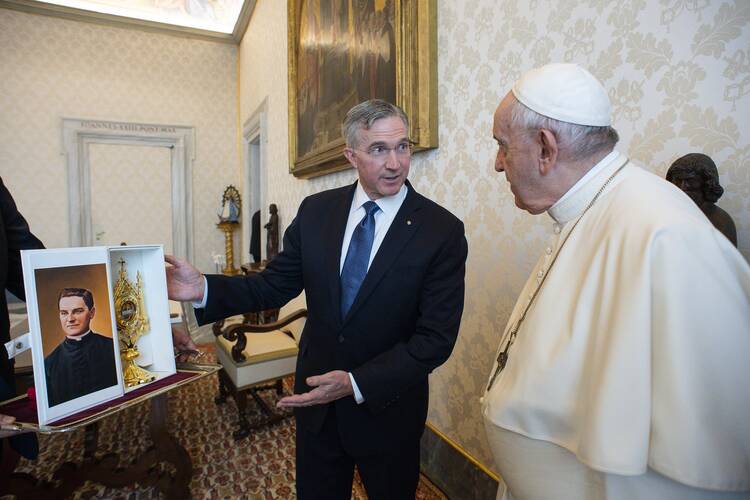 Patrick E. Kelly is the 14th supreme knight of the Knights of Columbus, the world’s largest Catholic fraternal service organization. He took office on March 1, 2021, after serving as deputy supreme knight for four years. He also served the Knights as vice president for public policy for 11 years and was the first executive director of the Saint John Paul II National Shrine in Washington, D.C.

Mr. Kelly was interviewed by Matt Malone, S.J., the editor in chief of America, in the William J. Loschert Studio at the offices of America Media in Manhattan. This excerpt from their conversation has been edited for length and clarity.

Patrick E. Kelly is the 14th supreme knight of the Knights of Columbus. He took office on March 1, 2021.

What are some of the milestones in your life that led you to become the supreme knight?

There were many. If you had told me 20 years ago that I would be working for the Knights of Columbus and even being the supreme knight, I would’ve said you were crazy. But it was really the Lord sort of moving me along in my life.

A very formative thing for me was service in the Navy. So I was a Navy JAG. I was a military lawyer and that was a great experience. I dealt a lot with young sailors and the problems that they had. After getting to know them pretty well, because you’re representing them at a court-martial, I learned that so many of them had very fragile home lives. They were from homes that weren’t intact, or there was no father figure in their lives. And that really struck me.

And so I would work with the sailors, but I would realize that there were some fundamental issues. And that got me interested in marriage and family. So I left the Navy and went to study marriage and family at the John Paul II Institute. The theology around that—it was very seminal for me.

I was a military lawyer and that was a great experience. I dealt a lot with young sailors and the problems that they had.

How was that seminal? How did it open your heart and your mind?

I knew what the church teaches, but that education gave me the “why” behind “what” she teaches. And that was wonderful. It showed me to see the human person from God’s view, and that the person isn’t an end and never a means. The dignity of life, the dignity of the person, the beauty of marriage—that really moved me.

You talked about how encountering young men and the problems that they face in contemporary society was one of the things that motivated you to start thinking about how you might be of service to them. How does the Knights of Columbus speak to those men today?

I think we can offer them brotherhood and a sense of fraternity in the best sense. I think a lot of times men today are suffering from a lack of meaning in their lives. A lot of men are hooked on their iPhones, in the virtual worlds. I think men tend to isolate themselves more than women do. What the knights can offer is that sense of coming together as brothers for a common purpose, for a purpose that is greater than you. So you’re looking with your brothers at a horizon.

I also think we offer tremendous opportunities for charity, for men to get out of themselves and to help others, with a sense of servant leadership. Individually, many of us might want to do that. But in the Knights of Columbus, we actually have a structure that allows you to do that.

I think a lot of times men today are suffering from a lack of meaning in their lives.

Do you think that we as a church or as a society struggle to talk about these issues that confront men today?

I think that’s true. But I think you see a resurgence in parishes of men’s groups, and we’re seeing a lot of Knights of Columbus councils getting much more involved in faith formation. And that’s a really positive thing, because I think men are realizing that they want more and they’re coming together in brotherhood to learn their faith. They need this, but I do think men struggle to talk about it.

We’ve talked a lot in the Knights about a men’s Bible study, and we’ve been doing some work, and there really aren’t many out there. I know for women, there are a lot of very good women’s Bible studies, but I think there is a real need there [for men].

It seems to me that what’s central to what you’re talking about is relationship, this sense of brotherhood and fraternity, but also your relationship to the community. Every relationship has to be in some way procreative in the broadest sense of the word. It has to result in some kind of charity, some life-giving event or action or force. And of course that begins and ends with God.

So there’s also a way in which the Knights cultivate spirituality and a life of prayer among its members. And I imagine taking on this responsibility has been a huge part of life as a knight for you.

It has been. When I first became supreme knight, six months ago, I was talking to a priest friend of mine, who said, “The number one thing is, you have to take care of your spiritual life.” He said, “If you don’t, with the demands on you, you will get depleted and you won’t be good for anybody.” I take that very seriously.

Following where there is consolation and desolation with decision making—that has helped me tremendously in my short time as supreme knight.

So I pray in the morning. I get up really early. We have three girls. So by about 6:30 they’re awake and the house starts to get noisy. So I’m up an hour before them to try to get some prayer time in. And then I try to hit morning Mass at 7:30. And I find it to be tremendously helpful.

But I would also [point to] the Ignatian method of discerning, of trying to be objective, but also following where there is consolation and desolation with decision making. That has helped me tremendously in my short time as supreme knight.

It’s very hard to learn how to discern the lights from the shadows without cultivating that habit of prayer. Of actually reflecting day after day where God was in the course of that day. Because it seems to me—tell me if you agree with this—the distinguishing feature of Christian leadership is the sense of being led, that fundamentally, first and foremost, we are followers.

I agree. I always say that you can’t be a good leader without being a good follower. And for us as Christians, we follow Jesus as the leader par excellence. There’s also humility, too, because. particularly when you’re new in a leadership position, there’s a lot you’re learning and there’s a lot you don’t know. But there’s also freedom in that humility, to ask the questions and to be open to other ways of doing things. I think the idea of a leader without a sense of Christian virtue—that could be very scary.