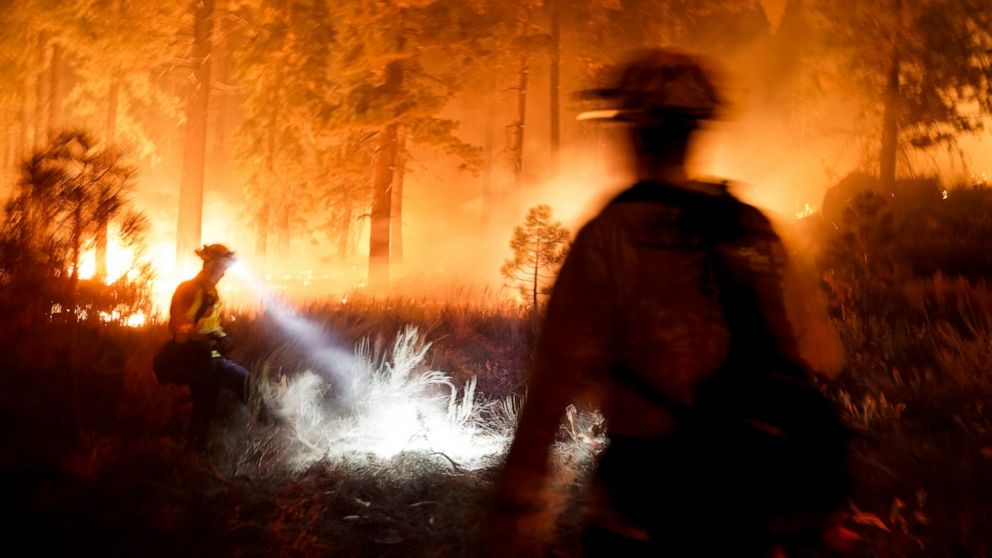 SOUTH LAKE TAHOE, Calif. — A day after an explosive wildfire emptied a resort city at the southern tip of Lake Tahoe, a huge firefighting force braced for strong winds Tuesday as residents in neighboring Nevada were put on notice to be ready to flee.

The city of South Lake Tahoe, usually bustling with summer tourists, was eerily empty and the air thick and hazy with smoke from the Caldor Fire, one of two major blazes plaguing California. On Monday, roughly 22,000 residents jammed the city’s main artery for hours after they were ordered to leave as the fire advanced, chewing up drought-stricken vegetation.

The National Weather Service warned that weather conditions through Wednesday would include low humidity, dry fuel and wind gusts up to 30 mph (48 kph).

“That’s definitely not going to help the firefighting efforts,” said Courtney Coats, a spokeswoman for the U.S. Forest Service.

As of Tuesday morning, the fire was about 7 miles (11 kilometers) from the lake, but she said forestry officials did not know how close the flames were to city limits, and crews had not been able to go into burned areas to assess damage.

South Lake Tahoe city officials said only a handful of residents defied the evacuation order. But nearly everyone worried Tuesday about what the fire would do next.

“It just kind of sucks waiting. I mean, I know it’s close down that way,” said Russ Crupi, gesturing south from his home in the Heavenly Valley Estates mobile home park, which he and his wife manage for a living. He had arranged sprinklers and tractors around the neighborhood.

“I’m worried about what’ll be here when people come back. People want to come back to their houses and that’s what I’m going to try to do,” he said.

Pushed by strong winds, the Caldor Fire crossed two major highways and burned mountain cabins as it swept down slopes into the Tahoe Basin. More firefighters arrived just after dark Monday, and many were dispatched to protect homes in the Christmas Valley area, about 10 miles (16 kilometers) from South Lake Tahoe.

But on Tuesday, only a few dozen tourists remained on the casino floor of the Montbleu Resort, Casino and Spa. The state board that controls gaming said that casino regulators were monitoring operations at the four largest gambling properties in the city.

Hotels are housing evacuees, fire crews and other emergency personnel. In all, Harrah’s, Harveys Lake Tahoe Casino, the Hard Rock and Montbleu Resort have more than 2,200 hotel rooms.

Nevada Gov. Steve Sisolak urged residents to be prepared, saying there was no timeline for when evacuations might be ordered. At a news conference in Carson City, he noted that ash was falling on him even though the fire was about 20 miles (32 kilometers) away.

“I’m standing here and I’m getting all ash particulates on my jacket, even,” the governor said. “This is serious, folks.”

Evacuation shelters at community centers in Carson City and Douglas County were at capacity, officials said Tuesday. Additional sites were open at a park in Carson City, the Reno Sparks Convention Center and a rodeo event center in Dayton and Lyon County fairgrounds in Yerington.

At the Douglas County Community & Senior Center in Gardnerville, people had their temperature checked before entering a gymnasium of cots set up by the Red Cross. Outside, evacuees who had stayed in tents sorted through ramen noodles and plastic bags of clothes and keepsakes.

South Lake Tahoe resident Lorie Major was at the grocery store when she got the alert on her phone.

She put on headphones, turned on the Grateful Dead’s “Fire on the Mountain” and walked home to an empty apartment complex already vacated by neighbors. She and her mini Australian shepherd, Koda, took a 20-mile (32-kilometer) taxi ride from her South Lake Tahoe apartment to a hotel in Minden, Nevada.

More than 15,000 firefighters were battling dozens of California blazes, with help from out of state crews. Climate change has made the West much warmer and drier in the past 30 years and will continue to make weather more extreme and wildfires more frequent and destructive, scientists say.

The threat of fire is so widespread that the U.S. Forest Service announced Monday that all national forests in California would be closed until Sept. 17.

Crews are battling the Dixie, the second-largest wildfire in state history at 1,260 square miles (3,267 square kilometers). The weeks-old fire was burning about 65 miles (105 kilometers) north of the Lake Tahoe-area blaze and prompting new evacuation orders and warnings this week.

The Caldor Fire has scorched nearly 300 square miles (777 square kilometers) since breaking out Aug. 14. After the weekend’s fierce burning, containment dropped from 19% to 16%.

More than 600 structures have been destroyed, and at least 33,000 more were threatened.

The last two wildfires that ripped through populated areas near Tahoe were the Angora Fire that destroyed more than 200 homes in 2007 and the Gondola Fire in 2002 that ignited near a chairlift at Heavenly Mountain Resort.

At the evacuation center in Gardnerville, Joe Gillespie said he, his girlfriend and her son left their home in Meyers south of South Lake Tahoe on Sunday, bringing clothes, picture frames and collectibles like Hot Wheels toys from the 1960s that Gillespie’s mother gave him.

Gillespie, a mechanic at Sierra-at-Tahoe Resort, said that unlike the northern shore of Lake Tahoe, which is dotted with mansions and second homes, the area currently under threat houses blue-collar workers who make their living at the casinos and ski resorts that make the area so popular.

The Sierra-at-Tahoe Resort is beloved for its unpretentious and comparatively affordable winter prices. It turns 75 this year, he said.

“It sounds like we won’t be opening because of the fire,” he said.