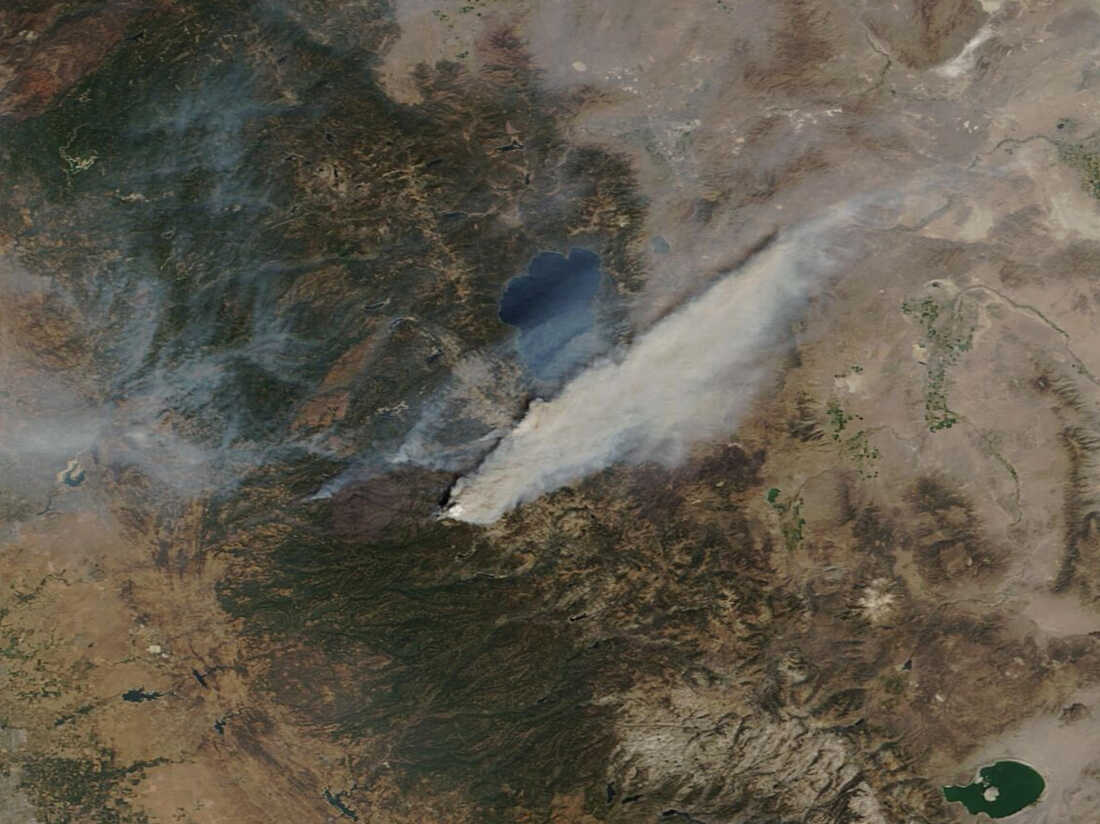 This Sunday, Aug. 29, 2021, image provided by Maxar Technologies, shows a Moderate Resolution Imaging Spectroradiometer (MODIS), a true-color image overview of the wildfires at Lake Tahoe, in South Lake Tahoe, Calif. Climate change has made the region warmer and drier in the past 30 years and will continue to make the weather more extreme and wildfires more destructive, according to scientists. AP hide caption 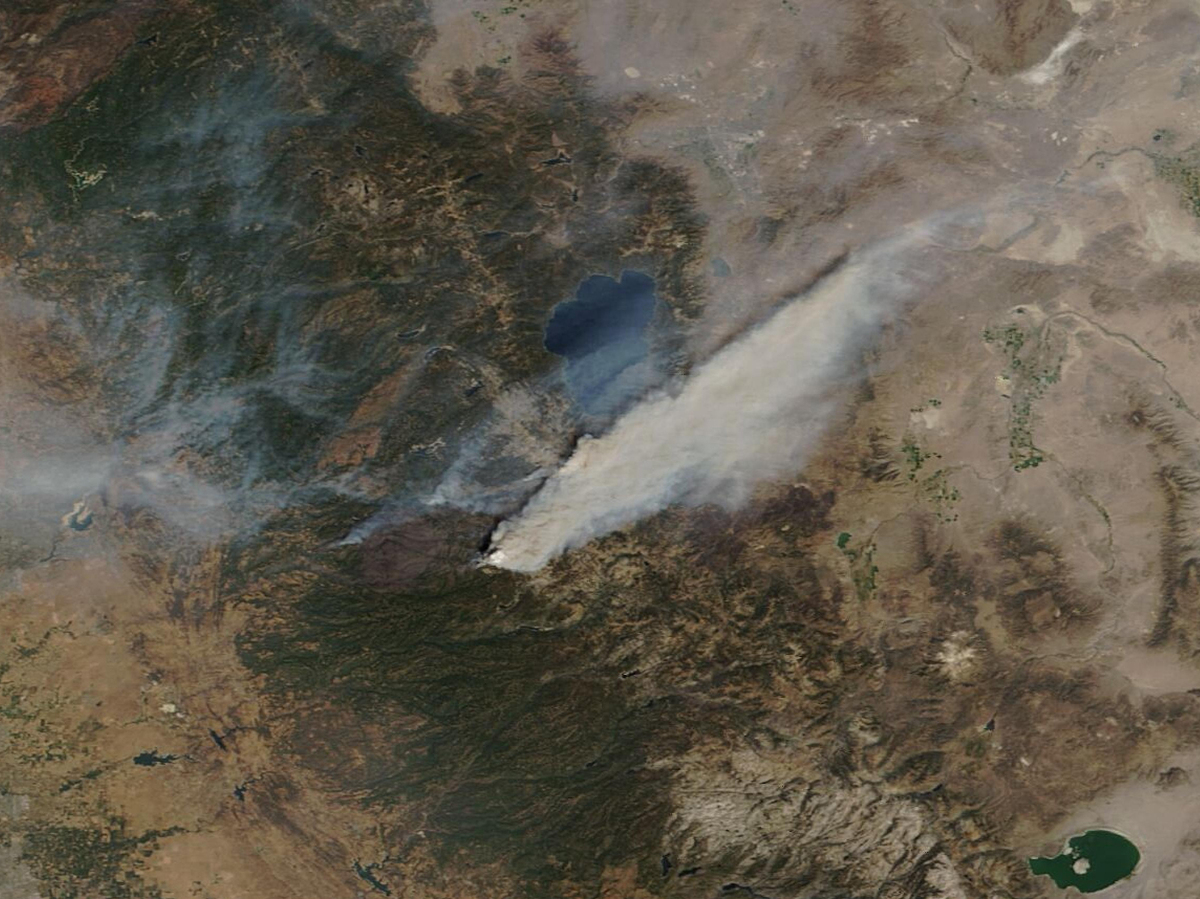 This Sunday, Aug. 29, 2021, image provided by Maxar Technologies, shows a Moderate Resolution Imaging Spectroradiometer (MODIS), a true-color image overview of the wildfires at Lake Tahoe, in South Lake Tahoe, Calif. Climate change has made the region warmer and drier in the past 30 years and will continue to make the weather more extreme and wildfires more destructive, according to scientists.

SOUTH LAKE TAHOE, Calif. — A ferocious wildfire swept toward Lake Tahoe on Tuesday just hours after roads were clogged with fleeing cars when the entire California resort city of South Lake Tahoe was ordered to evacuate and communities just across the state line in Nevada were warned to get ready to leave.

The popular vacation haven normally filled with tens of thousands of summer tourists emptied out Monday as the massive Caldor Fire rapidly expanded. Vehicles loaded with bikes and camping gear and hauling boats were in gridlock traffic, stalled in hazy, brown air that smelled like a campfire. Police and other emergency vehicles whizzed by.

“It’s more out of control than I thought,” evacuee Glen Naasz said of the fire that by late Monday had been pushed by strong winds across California highways 50 and 89, burning mountain cabins as it swept down slopes into the Tahoe Basin.

Additional strike teams arrived just after dark and many of the new firefighters were immediately dispatched to protect homes in the Christmas Valley area about 10 miles (16 kilometers) from South Lake Tahoe, said fire spokesman Dominic Polito.

“We’re flooding the area with resources,” he said. “Wherever there are structures, there are firefighters on the ground.”

Ken Breslin was stuck in bumper-to-bumper traffic less than a mile (1.6 kilometers) from his home in the city of 22,000, with only a quarter-tank of gas in his Ford Escape. His son begged him to leave Sunday night, but he shrugged him off, certain that if an evacuation order came, it would be later in the week.

“Before, it was, ‘No worries … it’s not going to crest. It’s not gonna come down the hill. There’s 3,500 firefighters, all those bulldozers and all the air support,'” he said. “Until this morning, I didn’t think there was a chance it could come into this area. Now, it’s very real.”

As flames churned toward South Lake Tahoe, residents just over the state line in Douglas County, Nevada were under evacuation warnings. 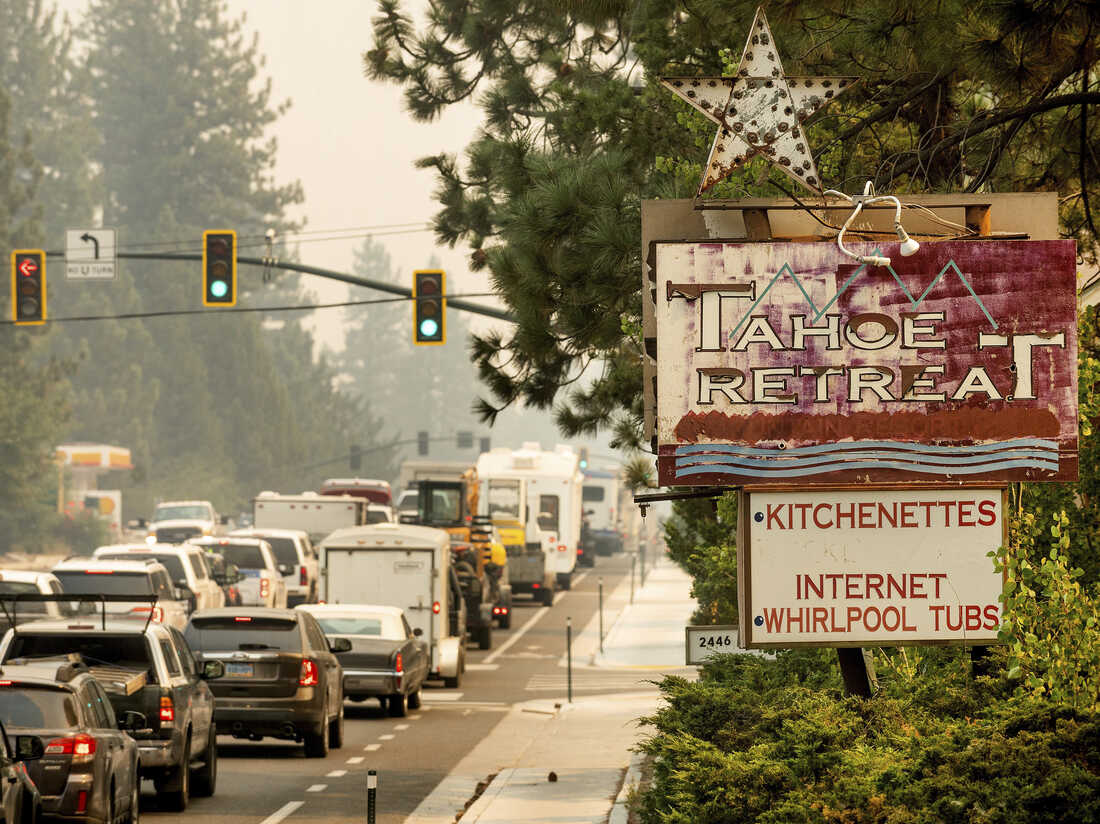 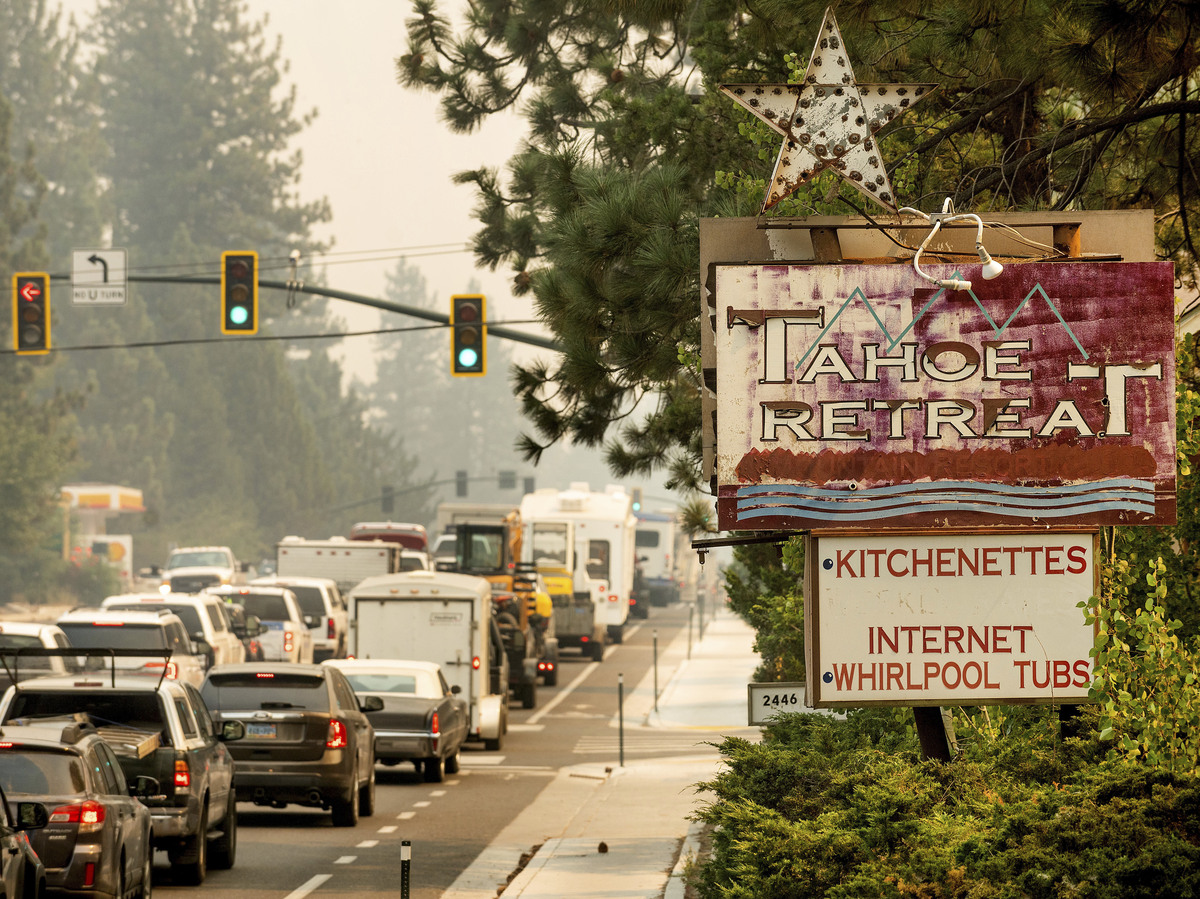 With the Caldor Fire approaching, traffic on Highway 50 stands still as South Lake Tahoe, Calif., as residents try to evacuate on Monday, Aug. 30, 2021.

Monday’s fresh evacuation orders, unheard of in the city, came a day after communities several miles south of the lake were abruptly ordered to leave as the fire raged nearby. South Lake Tahoe’s main medical facility, Barton Memorial Hospital, proactively evacuated dozens of patients, and the El Dorado Sheriff’s Office transferred inmates to a neighboring jail.

“There is fire activity happening in California that we have never seen before. The critical thing for the public to know is evacuate early,” said Chief Thom Porter, director of the California Department of Forestry and Fire Protection, or Cal Fire. “For the rest of you in California: Every acre can and will burn someday in this state.”

The threat of fire is so widespread that the U.S. Forest Service announced Monday that all national forests in California would be closed until Sept. 17.

“We do not take this decision lightly but this is the best choice for public safety,” Regional Forester Jennifer Eberlien said.

Overnight, the already massive Caldor Fire grew 7 miles (11 kilometers) in direction in one area northeast of Highway 50 and more than 8 miles (13 miles) in another, Cal Fire officials said.

More than 15,000 firefighters were battling dozens of California blazes, including crews from Utah, Washington, Wisconsin and West Virginia, said Mark Ghilarducci, director of California’s Office of Emergency Services. About 250 active-duty soldiers were being trained in Washington state to help with the arduous work of clearing forest debris by hand.

Crews from Louisiana, however, had to return to that state because of Hurricane Ida, “another major catastrophic event taking place in the country and is a pull on resources throughout the United States,” he said.

Porter said that only twice in California history have blazes burned from one side of the Sierra Nevada to the other, both this month, with the Caldor and Dixie fires. The Dixie, the second-largest wildfire in state history at 1,205 square miles (3,121 square kilometers) about 65 miles (105 kilometers) north of the Lake Tahoe-area blaze, prompted new evacuation orders and warnings Monday.

On weekends, the city’s population can easily triple and on holiday weekends, like the upcoming Labor Day weekend, up to 100,000 people will visit for fun and sun. But South Lake Tahoe City Mayor Tamara Wallace said they’ve been telling people for days to stay away because of poor air from wildfires.

She said she thought the Caldor Fire would stay farther away. Fires in the past did not spread so rapidly near the tourist city.

“It’s just yet another example of how wildfires have changed over the years,” she said as she gathered treasures passed from her deceased parent and her husband’s while they prepared to leave.

The last two wildfires that ripped through populated areas near Tahoe were the Angora Fire that destroyed more than 200 homes in 2007 and the Gondola Fire in 2002 that ignited near a chairlift at Heavenly Mountain Resort.

Since then, the dead trees have accumulated and the region has coped with serious droughts, Wallace said. Climate change has made the West much warmer and drier in the past 30 years and will continue to make weather more extreme and wildfires more frequent and destructive, scientists say.

Wallace said traffic was crawling Monday, but praised the evacuation as orderly because residents heeded officials’ orders. Authorities have also been more aggressive in recent years, issuing warnings and orders sooner so people have more time to flee.

Not everyone agreed as fierce winds kicked up dust and debris and drivers sat in gridlock. The California Highway Patrol added “quite a bit of additional personnel” to help guide a chaotic evacuation from South Lake Tahoe, as huge traffic jams slowed the evacuation of vehicles, CHP Assistant Commissioner Ryan Okashima said. Congestion had eased by Monday afternoon. 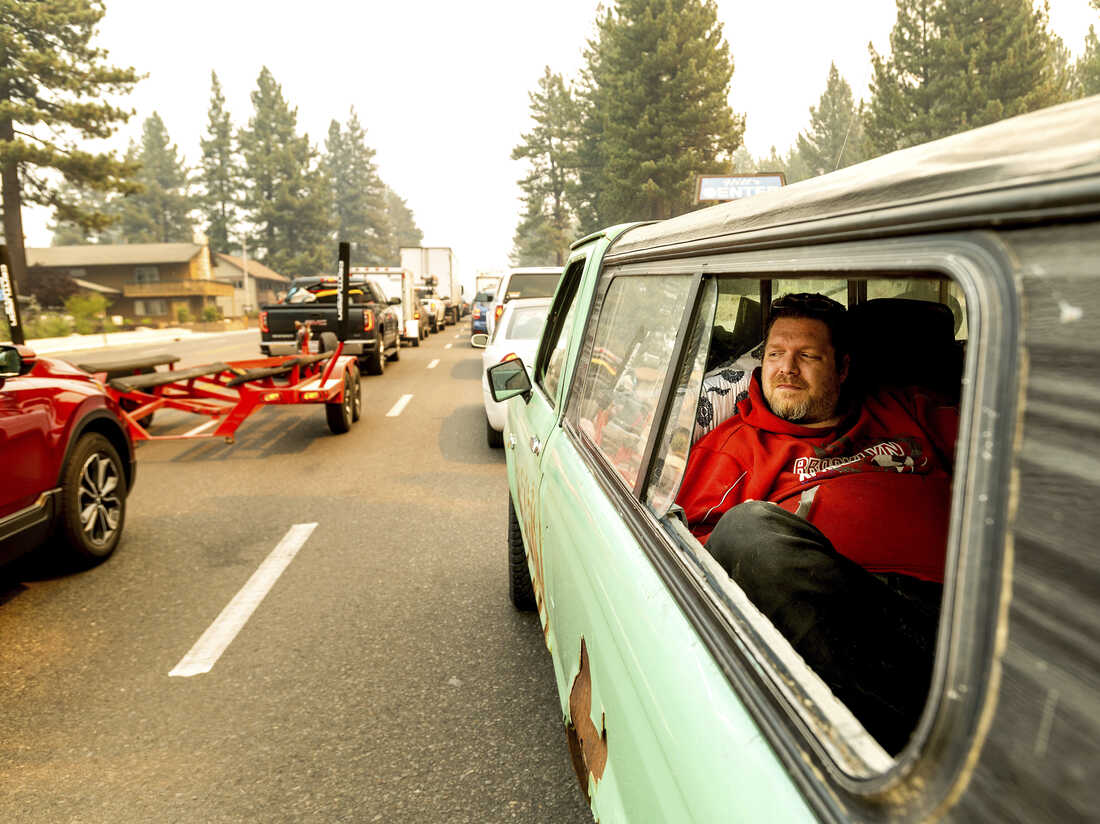 As the Caldor Fire approaches South Lake Tahoe, Calif., 40-year Tahoe resident Chris, who declined to give his last name, lies in a pick-up truck while evacuating on Monday, Aug. 30, 2021. His car moved about 60 feet in an hour as evacuating residents filled Highway 50. Noah Berger/AP hide caption 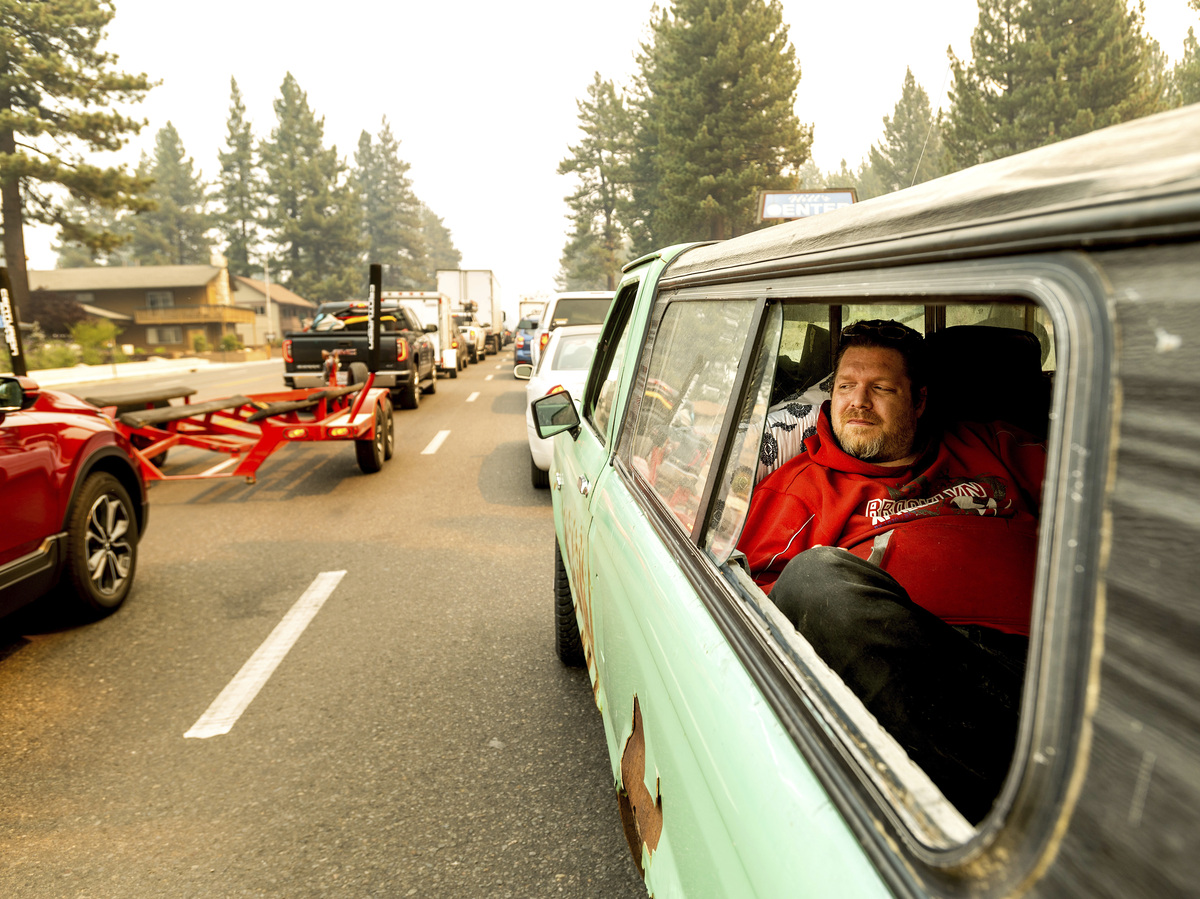 As the Caldor Fire approaches South Lake Tahoe, Calif., 40-year Tahoe resident Chris, who declined to give his last name, lies in a pick-up truck while evacuating on Monday, Aug. 30, 2021. His car moved about 60 feet in an hour as evacuating residents filled Highway 50.

“The fuel went so fast and it climbed the ridge so quick,” Larson said of the fire after settling into an evacuation center at a park in Carson City, Nevada. Red Cross volunteers set up the facility with 50 cots after another evacuation center in nearby Gardnerville reached capacity.

The fire destroyed multiple homes Sunday along Highway 50, one of the main routes to the lake’s south end. It also roared through the Sierra-at-Tahoe ski resort, demolishing some buildings but leaving the main buildings at the base intact. Crews used snow-making machines to douse the ground.

Cabins burned near the unincorporated community of Echo Lake, where Tom Fashinell has operated Echo Chalet with his wife since 1984. The summer-only resort offers cabin rentals, but was ordered to close early for the season by the U.S. Forest Service due to ongoing wildfires.

Fashinell said he was glued to the local TV news. “We’re watching to see whether the building survives,” he said.

The Caldor Fire has scorched nearly 292 square miles (756 square kilometers) since breaking out Aug. 14. After the weekend’s fierce burning, containment dropped from 19% to 15%. More than 600 structures have been destroyed, and at least 20,000 more were threatened. Gov. Steve Sisolak on Monday declared a state of emergency in Nevada, citing “the anticipation” that the wildfire in the Lake Tahoe area in California would burn across the state line into the Silver State.

The National Weather Service warned of dangerous fire conditions and winds through Wednesday.

Diane Kinney, who has lived in the city since the 1970s, said this is the first time her neighborhood has been ordered to evacuate. She and her husband were packing up keepsakes, jewelry and insurance papers shortly after noon. They had to leave their 1964 Chevelle, but she hopes it stays safe.

“Everybody wants to live in Lake Tahoe. There are definitely advantages of being in the mountains, being with these beautiful pine trees,” she said. “But we definitely have to get out now.”