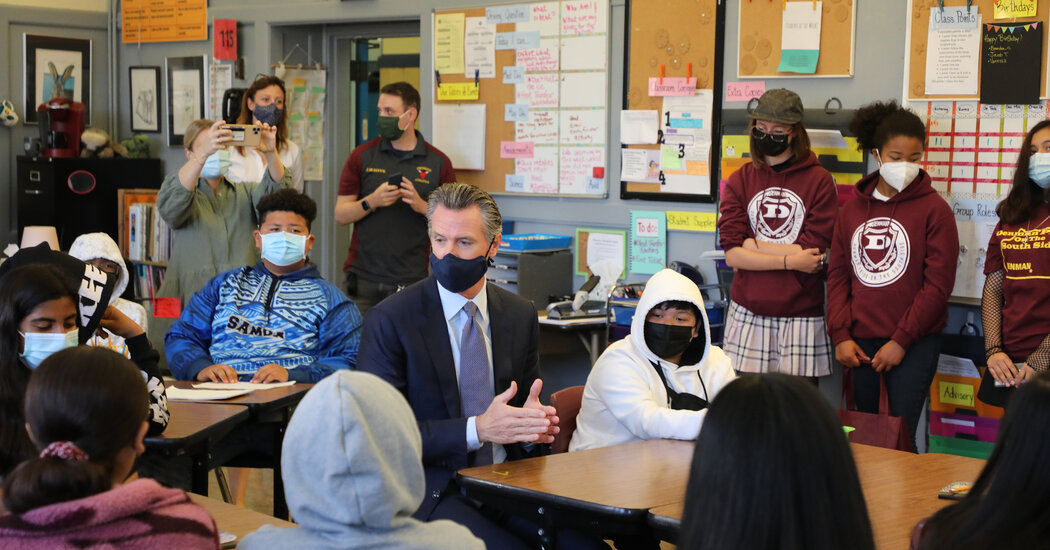 SACRAMENTO — California’s governor on Friday issued the nation’s first statewide Covid-19 vaccine mandate for schoolchildren, saying they would be required as soon as next fall to be inoculated against the coronavirus to attend public and private schools in the state.

Gov. Gavin Newsom’s order adds the coronavirus vaccine to other inoculations, such as for measles and mumps, that are required for nearly seven million students to attend K-12 schools in person. The mandate will first apply to seventh through 12th grades, and then kindergarten through sixth grades, but only after the Food and Drug Administration grants full approval to a vaccine for those age groups.

The mandate is one of the largest announced during a coronavirus pandemic that has torn through the country, claiming more than 700,000 lives, disrupting education and hobbling the economy.

Another sweeping order that requires health care workers to be vaccinated took effect on Thursday in California, following similar — and in some cases, even more stringent — mandates in New York, Rhode Island, Maine, Oregon and the District of Columbia. In Connecticut, state employees, school employees and child care workers have until Oct. 4 to get at least one vaccine dose. And major corporations, including United Airlines and Tyson Foods, have mandated coronavirus vaccines for hundreds of thousands of workers.

Preliminary data indicates the mandates are working to persuade holdouts who have continued to refuse vaccination, either because of misinformation or for religious or political reasons. (Many mandates have limited medical and religious exemptions.) But schools generally have been more cautious about mandates, in part because not all children have been authorized for a vaccine and because of the political ramifications that may come with forcing the hands of parents. Polling indicates that a healthy share of parents — about 40 to 50 percent by some estimates — have expressed hesitance about vaccinating their children.

Only a handful of school systems have moved to require Covid-19 vaccinations for children, and Mr. Newsom’s statewide rule is contingent upon federal approval that is likely to take months, particularly for younger students. The Pfizer-BioNTech vaccine is fully approved for people 16 and older; the vaccine remains available for children ages 12 to 15 under emergency use authorization.

Pfizer and BioNTech are expected next week to formally ask the F.D.A. to authorize emergency use of their vaccine for children 5 to 11, according to people familiar with the companies’ plans. Dr. Scott Gottlieb, a Pfizer board member, has said the F.D.A. could decide on authorization as early as Halloween.

The California mandate is expected to give political cover to schools in more conservative parts of the state to impose similar district-level mandates, particularly in areas where vaccine resistance has created coronavirus hot spots. Kevin Kiley, a Republican state assemblyman on his chamber’s education committee who was among the challengers to Mr. Newsom in a recent attempt to recall him, noted that the mandate was unlikely to have much immediate impact and criticized the governor for acting unilaterally rather than working with the Legislature.

He added that requiring children to get inoculated was inconsistent with the governor’s refusal to issue similar mandates for state prison guards, who donated generously to his campaign to beat the recall. A federal judge this week ordered inoculation for the guards.

“The governor obviously just wants a headline,” Mr. Kiley said. “We had the worst school shutdowns, we had the worst business shutdowns, and now we have the highest level of coercion and control when it comes to mandates.”

Polling indicates that California is ahead of the nation when it comes to vaccinating children. Nationally, about 48 percent of parents with children ages 12 to 17 said their child had been vaccinated as of September, according to a Kaiser Family Foundation poll.

But Mr. Newsom said reaching a higher level of immunity would be critical to keeping classrooms open. About 63 percent of Californians aged 12 to 17 have received at least one dose of a vaccine, compared with about 72 percent of eligible Californians overall.

The governor said he anticipated that the requirement would apply to grades seven and up starting in July 2022, in time for the next fall semester, with provisions for independent study for unvaccinated students. Rules for students with medical and other exemptions will be determined through a public rule-making process.

The State of Vaccine Mandates in the U.S.

“We want to end this pandemic. We are all exhausted by it,” said the governor, who has four children, the eldest of whom is 12. His family has had to quarantine several times during the pandemic, and days after Mr. Newsom beat back the recall, his office confirmed that two of the children had tested positive for Covid-19.

California has taken a particularly hard line on pandemic health precautions, an approach that prolonged classroom closures far beyond most of the rest of the country — in part at the behest of the state’s powerful teachers’ unions — but that also has yielded one of the nation’s lowest rates of new coronavirus cases recently.

Last month, the Los Angeles Unified School District — the second largest in the nation — became the first major school district in the country to announce a vaccine mandate for children 12 and older who attend school in person, which will be broadly effective by January.

School districts in Culver City and Piedmont have made similar announcements. The school board in Oakland voted last month to require students age 12 or older to be vaccinated, though some details — including the timing — have yet to be ironed out. In San Diego, students age 16 or older must be vaccinated by late December to attend in-person classes, with mandates contingent on vaccine clearance in the works for younger age groups.

California also requires that K-12 students, faculty and staff wear face masks at school, and announced vaccine rules for teachers and other school staff in August. Other states and districts across the country, including Washington State, New York City and Oregon, have done so, too.