Can you really hate the sin and love the sinner? 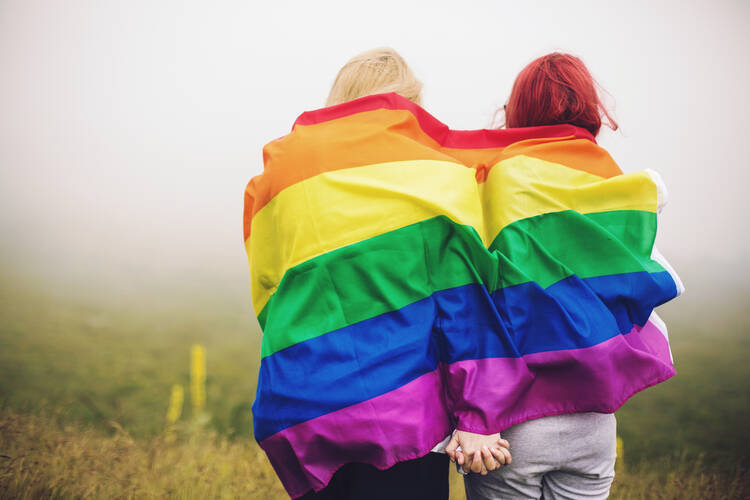 The phrase is not in the Bible, though Jesus asks us in the Gospels, in a variety of ways, to love one another and frequently admonishes us against sin. Perhaps the closest analogue to the contemporary saying is found in the Letter of Jude, which says, “Have mercy on some who are wavering; save others by snatching them out of the fire” (1:22-23).

But it might as well be in the Bible, so often is it used. It is an almost canonical saying, alongside “God helps those who help themselves” as a verse that people think is—or should be—in the Bible.

The phrase is not in the Bible, though Jesus asks us in the Gospels, in a variety of ways, to love one another and frequently admonishes us against sin.

“Hate the sin, love the sinner” makes a good deal of sense. As Christians we are called to love everyone, even our enemies, said Jesus, who forgave his executioners from the cross. Thus, we should love everyone, and that includes sinners. Jesus demonstrated that love repeatedly: He was frequently criticized for eating with “sinners and tax collectors,” when “table fellowship” was a sign of acceptance. At the same time, avoiding sin was at the heart of Jesus’ ministry. “Go and sin no more,” he says to the woman caught in adultery (Jn 8:1-11).

The saying also promotes a healthy demarcation between the person and the act. We can love and reverence a person who may have committed heinous sins. Helen Prejean, C.S.J., who ministers to inmates on death row, often says, “A person is more than the worst thing they’ve ever done.” An element of “hate the sin, love the sinner” is operative here.

The problem with this seemingly compassionate dictum is that today it is applied almost exclusively to one group: L.G.B.T.Q. people. The thinking is that we can love L.G.B.T.Q. people so long as we condemn their actions—including same-sex relations and same-sex marriage—and label them all as “sinners.”

Who is most regularly labeled “sinful” in a world of immorality of all sorts—greed, cruelty, lying, selfishness, racism, warmongering, callousness to the poor, and so on? L.G.B.T.Q. people.

With this selective application, the saying is used as a weapon against L.G.B.T.Q. people, because it effectively reduces L.G.B.T.Q. people to “sinners,” first and foremost. Of course we are all, in one way or another, sinners; but the use of the term in reference to L.G.B.T.Q. people can be particularly cruel, for there is no other group to which this term is applied so regularly, so reflexively, so relentlessly.

Here is a thought experiment I often use to help people understand this. Imagine if I told you I had been invited to give a lecture to college students—as I often am. As most people know, a great many college students are both unmarried and sexually active, and so are therefore not in conformity with church teaching, which prohibits any sex outside of marriage. The numbers are declining, but a recent study showed that 66 percent of college students had sex in the last year. Thus the majority are “sinful.”

Upon hearing that I was going to speak on a college campus, would you say, “Well, hate the sin, love the sinner”? Would you castigate me for speaking to a group of “sinners”? Probably not, since no one has ever said that to me in the hundreds of times I have spoken on college campuses. No one has ever used language remotely like that to describe college students to me.

Saying “Your love is a sin” strikes at each part of the human person.

Likewise, the majority of married Catholic couples these days (89 percent) believe that contraception is not a moral problem. Many use birth control and are therefore, according to church teaching, sinning. But if I told you I was leading a retreat for married couples, would you say, “Hate the sin, love the sinner?” Probably not, because, again, I have never heard anyone say this in the context of married couples in my 30 years as a Jesuit or 20 years as a priest. Not once.

So about whom is this statement most used? Who is most regularly labeled “sinful” in a world of immorality of all sorts—greed, cruelty, lying, selfishness, racism, warmongering, callousness to the poor, and so on? L.G.B.T.Q. people.

It is hard not to conclude that when people use “Hate the sin, love the sinner” exclusively when speaking about L.G.B.T.Q. Catholics, they are singling them out as if they are the only people whose lives are not in conformity with church teaching. Even worse, the “sin” that people focus on is the way that they love one another. William A. Barry, S.J., the spiritual writer and psychologist, once told me that this is especially damaging, because the way we love influences almost every aspect of our emotional, mental and spiritual lives. Saying “Your love is a sin” is an attack on part of a person’s deepest self. Our selves are a mixture of mind, body and heart. Saying “Your love is a sin” strikes at each part of the human person.

I thought of Jesus’s line, “Do you still not understand?”

And sadly, I hear “Hate the sin, love the sinner,” most often from people who don’t seem to love the L.G.B.T.Q. person at all.

Last year, I celebrated a memorial Mass for my friend Carlos, who had been married to his husband Jim for many years, and had been with him for over 30 years. Carlos was a pillar of the community at the Church of St. Ignatius Loyola in New York City and served as a eucharistic minister, lector and spiritual director, in addition to his daytime job as a hospital chaplain at Memorial Sloan-Kettering Hospital. After Carlos was diagnosed with cancer, his husband, Jim, lovingly cared for him, accompanying him from doctor visit to doctor visit, through major surgery, through rounds of chemotherapy and radiation, all the way until his death. Even though the memorial Mass took place many months after Carlos’s death, the church was packed. It was a sign of the love that the parish had for him and for Jim—as well the love that both had shown the parish.

A few weeks later I was speaking about L.G.B.T.Q. issues on a video call with another parish. I recounted the story of Carlos and Jim as an example of the lives led by many L.G.B.T.Q. people. One person said, “Well, hate the sin, love the sinner, right, Father?” He seemed to miss the point of the story, which was that we need to listen to the experiences of L.G.B.T.Q. people. That remark ignored their rich lives, reduced 30 years of companionship to a slogan, and categorized the two as “sinners,” when, again, we are all sinners. I thought of Jesus’s line, “Do you still not understand?”

The next time you are inclined to say, “Hate the sin, love the sinner,” you might ask yourself several questions. First, am I using this slogan only for L.G.B.T.Q. people? Second, where do their lives express not sin, but love? And finally, what can I learn about God from the people I am calling sinners?