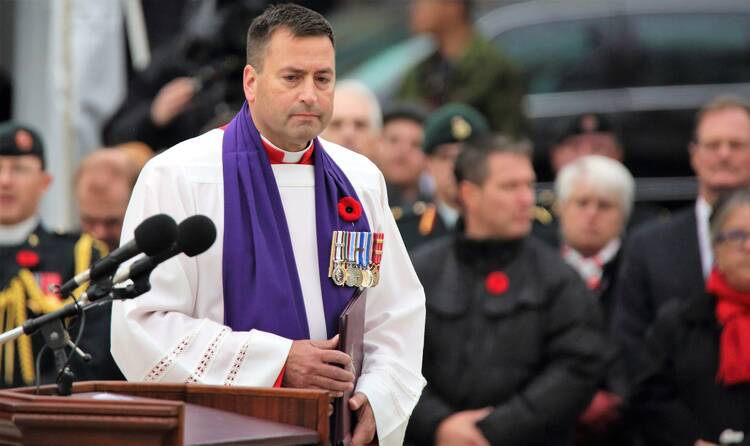 VANCOUVER, British Columbia (CNS) — An advisory panel to the Canadian Department of National Defence wants to rid the Canadian Armed Forces of military chaplains whose religious faiths do not openly promote diversity.

The advisory panel on systemic racism and discrimination made more than 40 recommendations, among them to consider not hiring “chaplaincy applicants affiliated with religious groups whose values are not aligned with those of the Defence Team.”

As examples of such values in its April 25 report, the advisory panel cites “some churches’ exclusion of women from their priesthoods” and “sexist notions embedded in their religious dogmas.”

Bishop Scott McCaig, the Catholic military ordinary for Canada, called the section on redefining the chaplaincy “deeply problematic and regrettable.”

The advisory panel cites “some churches’ exclusion of women from their priesthoods” and “sexist notions embedded in their religious dogmas.”

In a six-page response prepared for chaplains and members of the archdiocese for Catholics who serve in the Canadian Armed Forces, Bishop McCaig stressed that all chaplains are committed to “inclusive, nonjudgmental and universal care of service members, regardless of their religious or ethical convictions.”

“Many of the pejorative remarks would appear to be directed to Catholics, as well as some other Christians, and amounted to mere caricatures of what we actually profess,” he wrote. He said the advisory panel’s report was full of “errors and oversimplifications.”

Chaplains are responsible for “accompaniment, general counseling, ministry of presence and availability, discernment of morale and the authentic needs of members, and support for the military chain of command” to all persons “regardless of race, gender, religion or nonreligion,” he said, and such care “specifically excludes proselytization or any imposition of religious belief.”

Bishop McCaig said implementing the panel’s recommendation would be “a grave mistake.”

“Narrowing spiritual support does not increase diversity. Excluding the majority of faith traditions does not make the CAF more inclusive. Facilitating intolerance toward particular religious groups, who are believing and living in accord with the Canadian Charter of Rights and Freedoms, does not make the CAF more tolerant. Historic discrimination is not overcome by new and different forms of discrimination.”

“Many of the pejorative remarks would appear to be directed to Catholics … and amounted to mere caricatures of what we actually profess,” Bishop McCaig wrote.

Cardus said the recommendation was “explicitly prejudiced” and “undermines the panel’s very purpose: to address discrimination” in the defense department and armed forces.

The recommendation is one of four in a section titled “Re-Defining Chaplaincy” which says, “at present, some chaplains represent or are affiliated with organized religions whose beliefs are not synonymous with those of a diverse and inclusive workplace. Some of the affiliated religions of these chaplains do not subscribe to an open attitude and the promotion of diversity.”

In a commentary preceding the recommendation, the advisory panel cites some churches’ “sexist notions” and “certain faiths (that) have strict tenets requiring conversion of those they deem to be ‘pagan,’ or who belong to polytheistic religions.”

Cardus said that comment “demonstrates thinly veiled hostility” to Abrahamic religions such as Islam, Judaism and Christianity and shows “gross ignorance” of such faiths by presenting “caricatures of their adherents as violators of equality and social justice.”

It added, “In a constitutional democracy, it is wholly outside the scope of the state to make judgments on the truth claims of any religion or the attitudes of their adherents.”

The panel’s report says the defense department “cannot justify hiring representatives of organizations who marginalize certain people or categorically refuse them a position of leadership.”

Cardus called the panel’s position “a clear violation” of constitutional protections of freedom of conscience, religion and association and said the report was advocating for the state to “effectively police the legitimacy of Canadians’ most deeply held beliefs and how those are lived out in community with others.”

Cardus said that comment “demonstrates thinly veiled hostility” to Abrahamic religions such as Islam, Judaism and Christianity and shows “gross ignorance” of such faiths.

The advisory panel said it “has observed that there are varying degrees of misogyny, sexism and discrimination woven into the philosophies and beliefs of some mainstream religions currently represented in the cadre of chaplains in the CAF.”

Cardus responded that the comment was “deeply troubling” and displays “a deep ignorance and unfounded prejudice of various religious traditions.”

The role of the state, said Cardus, is “to ensure that all religious communities are protected from this kind of intrusion, not to engage in such intrusion themselves.”

Cardus commended the advisory panel’s overall goals of finding ways to eliminate systemic racism and discrimination but said its “narrow reading of inclusivity fails to understand that, in a pluralist democracy, everyone is free to adhere or not adhere to a religious faith.”

Cardus called on Anand to “firmly and publicly reject” the discriminatory sections and “affirm that all Canadians, including those with religious beliefs, will be supported through the pastoral services of CAF chaplains as they serve our country.”

Anand responded to the report with a tweet saying, “As minister of national defence and a racialized woman, I am committed to building institutions where Canadians from all backgrounds are included, welcomed and empowered. The report released today will help us achieve this mission.”

— Maj. Gen. Ed Fitch, who served in the former Yugoslavia and received the Meritorious Service Medal for his service there.

— Sgt. Aronhia:nens Derek Montour, a Mohawk who served in the Canadian Armed Forces but left after the divisive Oka Crisis in Quebec in 1990 and enlisted in the U.S. Marine Corps.

Maj. Sandra Perron, the first female infantry officer in the Canadian army; she completed two tours of duty in Yugoslavia.

Capt. Door L. Gibson, an army reservist described as “a strong proponent of diversity in the workplace,” who received the Order of Military Merit from Governor-General Michaëlle Jean in 2006.

Although none of the panel members’ biographies mentions religious or chaplaincy backgrounds, Fitch has served at Congregation Emanu-El in Victoria, British Columbia, and the Jewish Historical Society of BC. According to the Canadian military magazine Esprit de Corps, he is only the second Jewish member of the Canadian Armed Forces to achieve the rank of major general.