Authored by Patrick Cockburn via Counterpunch.org,

The invasion of the Capitol on 6 January now stands alongside 9/11 as an act of war against American democracy. Unsurprisingly, news coverage of the incursion has come to resemble war propaganda. All facts, true or false, are pointed in the same direction with the aim of demonising the enemy and anybody who minimises its demonic nature. 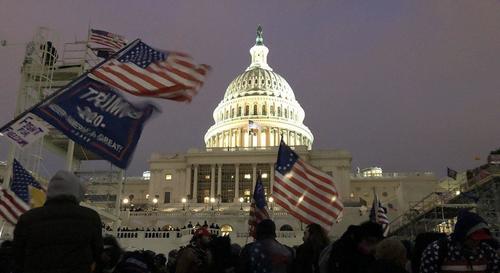 The three-hour takeover of the Capitol building by a pro-Trump mob is portrayed as a “coup” or an “insurrection” egged on by President Trump. The five who died during the events are seen as evidence of a violent, pre-planned plot to overturn the result of the US presidential election. Film spliced together and shown by prosecutors during the impeachment proceedings gives the impression that what happened resembled a battle scene in Braveheart.

Does it matter what really did occur?

Many people feel that anything damaging to Trump and his fascistic followers is all right by them. They may suspect privately that accounts of Trump’s plot against America are exaggerated, but the fabricator of 30,573 falsehoods over the last four years is scarcely in a position to criticise his opponents for departing from the strict truth. They argue that he is an unprecedented threat to American democracy, even as it becomes clear that what actually happened in the Capitol on that day was radically different from the way elements of the media reported it.

But what is reported matters and particularly so when it risks exaggerating violence or deepening fear and a sense of threat. If the US government really was the target of an armed insurrection, then this will be used to justify repression, as it was after 9/11, and not just against right wing conspiracy theorists. By becoming partisan instruments for spreading fake news, the media undermines its own credibility.

A problem with a giant news story like the Capitol invasion is that at first it is over-covered before we know the full facts, and then it is under-covered when those facts begin to emerge. This has been true of US media coverage. But even at the time it seemed to be a very peculiar armed insurrection.

Only one shot appears to have been fired and that was by a police officer who killed Trump supporter Ashil Babbitt who was involved in the storming of the Capitol.

In a country like the US awash with guns, this absence of gunfire is remarkable.

Five people died during the takeover of the Capitol building and this is the main proof of deadly intent by the rioters. But one of the dead was Babbitt, killed by the police, and three of the others were members of the pro-Trump mob, who died, respectively, from a stroke, a heart attack and from being accidentally crushed by the crowd.

This leaves just one person, Capitol policeman Brian Sicknick, as the sole victim of the Trump supporters who allegedly beat him to death with a fire extinguisher. On 8 January, the New York Times ran two stories about his death, quoting anonymous law officers as describing how pro-Trump rioters had struck him on the head with a fire extinguisher causing “a bloody gash on his head”. He is then reported to have been rushed to hospital, placed on life support but to have died the following day.

This graphic story went around the world and was widely picked up by other news outlets – including The Independent, the BBC and USA Today. It was also separately reported by the Associated Press. It gave credibility to the idea that the pro-Trump mob was willing to kill, even if they only killed one person. It also gave credibility to the idea that vice president Mike Pence, House speaker Nancy Pelosi and senator Mitt Romney had only escaped being lynched by seconds.

Yet over the last seven weeks – without the world paying any attention – the story of the murder of Officer Sicknick has progressively unravelled. Just how this happened is told in fascinating detail by Glenn Greenwald, the investigative journalist and constitutional lawyer, who concludes that “the problem with this story is that it is false in all respects”.

It was always strange that, though every event that took place during the riot was filmed, there is no video of the attack on Sicknick. He texted his brother later that day and sounded as if he was in good spirits. No autopsy report has been released that would confirm his alleged injuries. Conclusively, the New York Times quietly “updated” its original articles about the murder of Sicknick, admitting that new information had emerged that “questions the initial cause of his death provided by officials close to the Capitol Police”.

Since these officials were the only source for the original story, this – though readers might not guess it – amounts to an admission that it is untrue.

The misreporting of the Capitol invasion also included: a man carrying zip ties – that were taken to be evidence of a possible organised plan to detain political leaders – were in fact, according to prosecutors, picked up from a table within the Capitol, likely to ensure police could not use them. It is significant because it is part of a decline in media reporting everywhere, but particularly in the US. Trump is both a symptom and cause of this decline since he is a past master of saying and doing things, however untruthful or absurd, which are usually entertaining and always attention-grabbing. He guarantees high ratings for himself and the television channels, Trump haters and Trump-lovers alike, to their mutual benefit.

This symbiotic relationship between Trump and the media means that they do less and less reporting, allowing Trump and his supporters to provide the action while they provide the talking heads who thrive on venomous confrontation. Even American reporters on the ground have turned themselves into talking heads, willing to waffle on endlessly to meet the needs of 24/7 newscasts.

Events on Capitol Hill provided damning evidence of this decline in American journalism when Robert Moore, ITV News’s Washington correspondent, was the only television correspondent to make his way into the Capitol in the middle of the turmoil. He later expressed astonishment that, given the vast resources of US television and the thousands of journalists in Washington, that it should be “a solitary TV crew from Britain that was the only one to capture this moment in history – it’s bizarre”.

Bizarre, but not surprising. As a news event, the Capitol invasion showed that when it comes to spreading “fake facts”, the traditional media can be even more effective than the social media that is usually blamed.

Previous post: [ The authoritarian left is on the march ]
Next post: [ Amnesty International Rescinds Navalny's 'Prisoner Of Conscience' Status After Discovering His Past ]