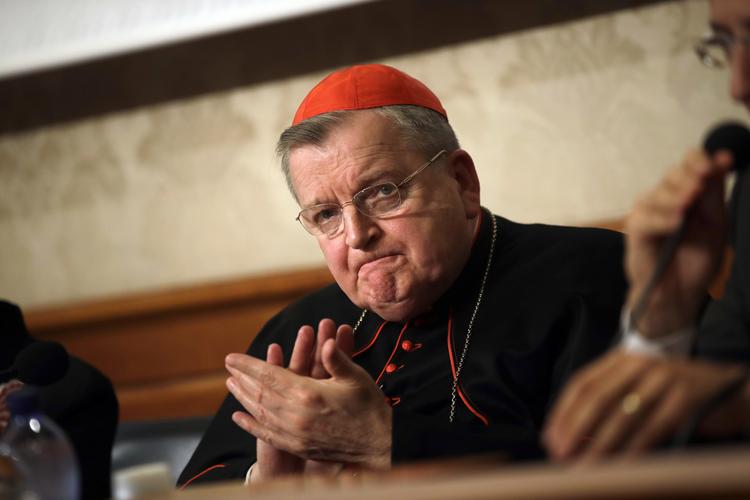 MADISON, Wis. (AP) — A top-ranking Roman Catholic cardinal who eschewed the COVID-19 vaccine said he will soon begin rehabilitation after contracting the coronavirus and spending days on a ventilator.

Cardinal Raymond Burke, 73, one of the church’s most outspoken leaders and a vaccine skeptic, tweeted Aug. 10 that he had contracted the virus. He was sedated and placed on a ventilator at an undisclosed hospital. His staff tweeted Aug. 21 that he had been taken off the ventilator and transferred out of intensive care to a regular room.

Cardinal Raymond Burke, 73, one of the church’s most outspoken conservatives and a vaccine skeptic, tweeted Aug. 10 that he had contracted the virus.

Burke tweeted a letter Saturday in which he thanked God for bringing him “to this point of healing and recovery.” He said he remains in the hospital and can’t respond to individual well-wishers because he’s about to begin “intensive rehabilitation” and will be going through an “extended period of convalescence.”

“In your charity, I know you will understand this circumstance and accept that I must preserve my energy so that I can recover my health and strength,” Burke wrote. “Since Divine Providence has governed that I remain hospitalized for the present, I now reaffirm that same episcopal conviction: suffering, united with the suffering of Jesus Christ, is truly efficacious in His Divine Plan for our salvation when accepted willingly and wholeheartedly.”

He didn’t elaborate on his condition or what rehabilitation will entail.

Burke served as bishop in the Diocese of La Crosse in Wisconsin before becoming archbishop in St. Louis. He left St. Louis in 2008 to oversee the Vatican’s supreme court, becoming the first American to hold that position.

“In your charity, I know you will understand this circumstance and accept that I must preserve my energy so that I can recover my health and strength,” Burke wrote.

Pope Francis moved Burke out of the Vatican court in 2014 after Burke said the church was like a ship with no rudder.

Burke has been on the attack against Francis since then. He joined three other conservative cardinals in formally asking the pope in 2016 to explain why he decided to let remarried Catholics receive Holy Communion.

Burke also has warned people that governments were using fear of the pandemic to manipulate people. He spoke out against mandatory vaccinations in May 2020, and said some in society want to implant microchips in people. He has said the best weapon for fighting the virus is Jesus Christ.