Cardinal Krajewski in Ukraine: ‘Faith can move mountains, not to mention a stupid war.’ 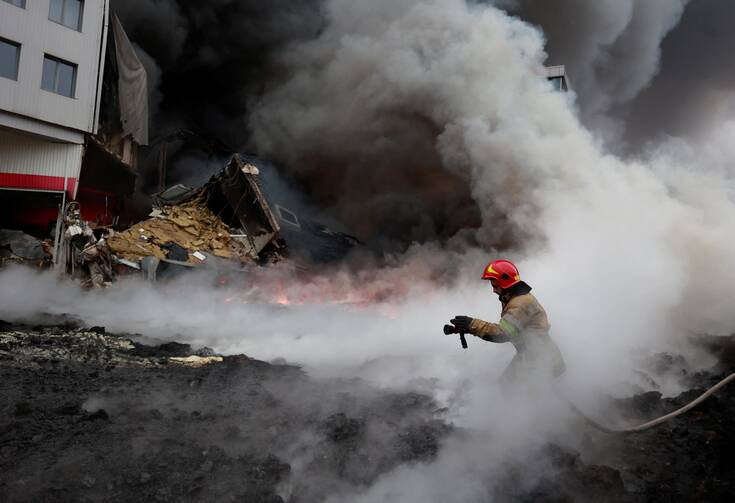 “Faith can move mountains, not to mention a stupid war,” Cardinal Konrad Krajewski, the papal almoner whom Pope Francis sent to Ukraine, told journalists in Lviv, a city in Western Ukraine 70 miles from the border with Poland, on March 10, after leading an interfaith prayer service for peace with Greek Catholic, Orthodox, Jewish and Muslim representatives in the city’s Latin cathedral.

“Our weapon is faith. Our other weapon is hope,” he said, adding that according to the Gospel, “the three most sophisticated weapons in the world” are “prayer, fasting and almsgiving.”

He stated this in answer to a question posed by Elisabetta Piqué (my wife), who is reporting on the war for La Nación, the main Argentine daily. She asked how was it possible to speak about negotiations that were taking place at the time in Turkey between the Russian and Ukrainian foreign ministers when the Russians continue to bomb hospitals, as they did yesterday in Mariupol and today near Kyiv.

On March 6, Pope Francis announced that he had sent Cardinal Krajewski and the Jesuit Cardinal Michael Czerny to express his personal closeness and presence “and that of all the Christian people” to the people of Ukraine.

Cardinal Krajewski: “I have come here with the logic of the Gospel. This is what Jesus would have done. He was also on the side of the people who suffered.”

Cardinal Czerny arrived in Hungary on March 8 and on March 9 visited reception centers for the migrants coming from Ukraine. He was also expected to raise concern that African and Asian residents in Ukraine, also suffering fear and displacement, be allowed to seek refuge without discrimination and to look into reports of an increase in human trafficking at the borders and in neighboring countries.

Speaking to journalists in Lviv after the interfaith prayer service, Cardinal Krajewski, the papal almoner or almsgiver, expounded on the “sophisticated weapons” of prayer, fasting, and almsgiving: “Almsgiving is what the whole world is doing for Ukraine,” he said. “Almsgiving means it pains me; I suffer too because I must share myself with others. This is what we are doing now. In Europe, we must now pay higher bills because of this ongoing conflict.”

Referring to the Gospel passage that was read at the prayer service, the papal almoner said: “He who knocks will finally have the door opened to him. He who prays will receive, but one must be constant” in prayer.

“And then, the very powerful weapon is fasting,” he added. “Fasting is where I invite God to be present to me; by fasting I want to distance myself from everything that does not belong to [God], and leave all the space to him. These are the weapons that we carry.”

The cardinal said he had come to Ukraine not simply to bring aid but “above all” to be present to the people, “because the Holy Father wants to be present in this martyred nation, because presence is the first word of love.”

In addition to “the moral support and faith, we also bring the hope that they can get out of this truly terrible situation,” he said. “There are also very concrete things that can be done for Ukraine, also through diplomatic channels on the ground.”

Representatives of Ukraine and the Holy See have both indicated their openness to Vatican mediation of peace talks between Russia and Ukraine, but no such willingness has been publicly signaled by Russia.

Cardinal Krajewski arrived at the Polish-Ukrainian border yesterday and visited refugees and volunteers in shelters and homes. Lviv, where he led the prayer service, is the gateway to Poland for hundreds of thousands of refugees; it currently hosts around 200,000 displaced people, and many embassies have moved there from Kyiv. Cardinal Krajewski told journalists he expects to leave Lviv today and go further into Ukraine, “if possible” to Kyiv, but it was not clear whether he could reach Kyiv given the bombing near the Ukrainian capital.

“I go forward to bring this message of peace from the Holy Father, and prayer—like the one I have just participated in—is our most powerful weapon, most powerful! Perhaps it can be a terrifying one for those who are attacking Ukraine!” he exclaimed.