Cardinal Parolin calls for an immediate ceasefire in Ukraine: ‘Peace is not a utopia.’ 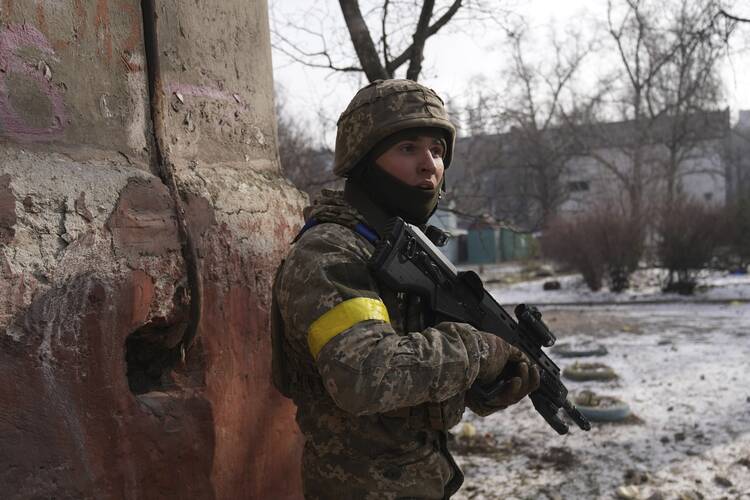 On the 17th day of the war in Ukraine, Cardinal Pietro Parolin, the Vatican secretary of state, repeated Pope Francis’ call for “an immediate ceasefire” in Ukraine and for “an end to the fighting and a negotiated solution to the conflict.”

He revealed that he had communicated this directly to the Russian foreign minister, Sergey Lavrov, when they spoke by phone on March 8. “I insisted on respect for the civilian population and on humanitarian corridors,” Cardinal Parolin said, and “reiterated the Holy See’s total availability for any kind of mediation that could favor peace in Ukraine,” an offer first made publicly by Pope Francis on March 6.

On the 17th day of the war in Ukraine, Cardinal Pietro Parolin, the Vatican secretary of state, repeated Pope Francis’ call for “an immediate ceasefire” in Ukraine.

The Italian cardinal, who is the head of the Vatican’s diplomatic service, repeated the pope’s appeal “to the consciences” of those conducting the war “that the fighting cease immediately.” He did so in an interview published on Vatican Media on March 12, which is broadcast in more than 40 languages worldwide, including in Russian and Chinese.

While Russian President Vladamir Putin and the state-controlled media in both Russia as well as officials in China insist on calling the war “a military operation,” Cardinal Parolin, like Pope Francis, categorically disagrees. “Words are important, and to define what is happening in Ukraine as a military operation is to fail to recognize the reality of the facts,” the cardinal said. “We are facing a war, which unfortunately claims many civilian victims, as all wars do.”

“We have before our eyes the terrible images coming from Ukraine. The victims among the civilians, women, elderly people, and defenseless children who have paid with their lives for the folly of war. The anguish grows as we see cities with gutted houses, no electricity, sub-zero temperatures, lack of food and medicine, as well as millions of refugees, mostly women and children, fleeing the bombs,” he said.

“We would have to possess a heart of stone in order to remain passive and to allow this havoc to continue, as rivers of blood and tears continue to flow,” Cardinal Parolin stated. “War is a barbarity!”

“We would have to possess a heart of stone in order to remain passive and to allow this havoc to continue, as rivers of blood and tears continue to flow.”

Many analysts claim the war has entered a second and perhaps even more ferocious phase. Referring to this escalation, the cardinal said: “War is like a cancer that grows, expands and feeds on itself. It is an adventure with no return, to use the prophetic words of St John Paul II. Unfortunately, we must recognize it: We have fallen into a vortex that can have incalculable and ill-fated consequences for everyone. When a conflict is underway, when the number of defenseless victims grows, it is always difficult to turn back.”

He emphasized the importance of exploring at this moment “every possible path toward a solution” and “to be tenacious in undertaking peace initiatives.”

He acknowledged that the world “already sorely tried by the pandemic, seems to have changed” in the span of a few days. “We see that in the face of what is happening in Ukraine, many people are talking about rearmament: new and huge sums of money are being allocated to armaments, the logic of war seems to prevail, the distance between nations is increasing. Unfortunately, we seem to have forgotten the lessons of history, of our recent history.”

He said he understood that these words “may sound utopian” today “in the face of the killing of women and children, in the face of millions of displaced persons, in the face of a country being destroyed.” But, he insisted, “peace is not a utopia; there are so many human lives in danger to be saved immediately! This is why there is a need for wide-ranging political-diplomatic initiatives to achieve a ceasefire and the start of negotiations to find a nonviolent solution.”

Emphasizing the urgent “need for political and diplomatic initiatives,” Cardinal Parolin that “we are falling back into the past instead of daring to take steps toward a different future, a future of peaceful coexistence.”

“Unfortunately, it must be acknowledged that after the fall of the Berlin Wall, we have not been able to build a new system of coexistence between nations that goes beyond military alliances or economic convenience,” he said. “The current war in Ukraine makes this defeat clear.” But, he insisted, “it is never too late to make peace, it is never too late to retrace one’s steps and find an agreement.”

Cardinal Parolin reaffirmed that “the Holy See is willing to do everything possible in this regard.”