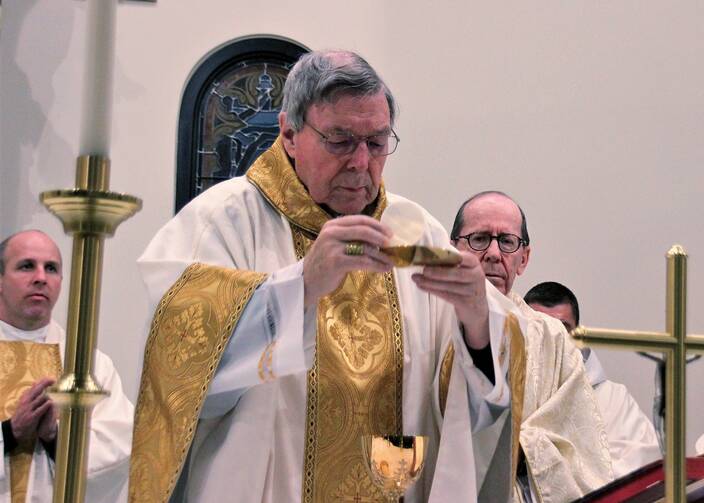 ROME (AP) — Cardinal George Pell has called for the Vatican’s doctrine office to intervene and reprimand two leading European Catholic churchmen who called for changes in Catholic teaching on sexuality and homosexuality.

Pell, who was convicted and then acquitted of sex abuse charges in his native Australia, said he understood the secular pressures in Germany were forcing debate about homosexuality and other hot-button issues in the church. But in an interview with KTV, the German Catholic television agency, Pell said the church cannot follow “the changing dictats of contemporary secular culture” and must stay true to its faith.

Cardinal Pell was referring to recent comments about sexuality by Cardinal Jean-Claude Hollerich of Luxembourg and Bishop Georg Baetzing, the head of the German bishops’ conference.

Cardinal Pell was referring to recent comments about sexuality by Cardinal Jean-Claude Hollerich of Luxembourg and Bishop Georg Baetzing, the head of the German bishops’ conference.

Pell was referring to recent comments about sexuality by Cardinal Jean-Claude Hollerich of Luxembourg, the president of the Commission of the Bishops’ Conferences of the European Union, and the head of the German bishops’ conference that have arisen as part of the German Church’s “synodal path” of debate and dialogue with the laity.

Hollerich has said he believes the current church teaching on homosexuality is “no longer correct,” and not based on science. In an interview with the German news agency KNA, he called for a “fundamental revision of the doctrine,” noting that Francis’ own outreach to gays could pave the way for a change.

Separately, the head of the German bishops’ conference, Bishop Georg Baetzing, told the German magazine Bunte that Catholic teaching needs to change vis-a-vis sexuality and pre-marital sex since no one follows it. Asked if same-sex relationships were permissible, the German prelate replied: “Yes, it’s OK if it’s done in fidelity and responsibility. It doesn’t affect the relationship with God.”

He also indicated he favored abolishing priestly celibacy and ordaining women — two things the Vatican has flatly rejected but have been endorsed in the German synodal process.

Pell, who was the Vatican’s top finance minister before he left in 2017 to stand trial in Australia, called for the Congregation for the Doctrine of the Faith to intervene and pronounce judgement on the “wholesale and explicit rejection” of the church’s teachings on homosexuality and monogamous marriage, in an unusual dressing down of a fellow cardinal and bishop.

“The Catholic Church is not a loose federation where different national synods or gatherings and prominent leaders are able to reject essential elements of the apostolic tradition and remain undisturbed,” a statement summarizing Pell’s points said. “This must not become a normal and tolerated situation.”

The Vatican has not commented on either statement though it has expressed concern about the German synodal process.