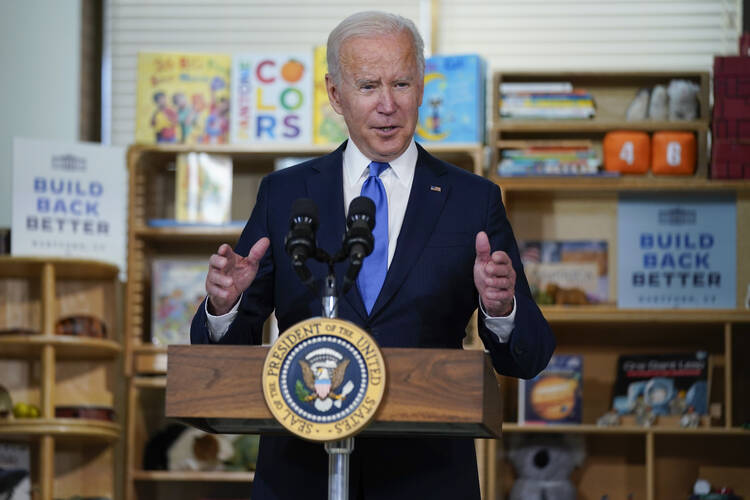 Politics has a funny way of playing out. While the political narrative is that the U.S. bishops oppose President Biden because of his position on abortion, an opportunity exists for both actors to work together toward enacting one of the most socially progressive pieces of legislation in decades.

Mr. Biden’s nearly $2 trillion “safety net” spending package, which he calls the Build Back Better Act, is now being considered by Congress as a budget reconciliation bill, which requires a simple majority to pass the Senate and thus evades a filibuster that would take 60 votes to shut down. If it passes the Senate, it will likely be through a party-line vote with all 50 Democrats (and only Democrats) voting in favor and Vice President Kamala Harris breaking the tie. The path to passage is almost as narrow in the House of Representatives, where the Democrats possess only a 220-212 majority.

The bill contains many ideas that the U.S. bishops have long supported, at least as general principles, including paid family leave, tax credits for children and working families, expanded health care for the poor and elderly, child care support and climate change initiatives. (There is also still a chance it could include protection from deportation and work authorization for certain immigrants, though the Senate parliamentarian has rejected one proposal to include this in the reconciliation bill.) Some of these ideas are mentioned in a Sept. 7 letter to Congress from the U.S. Conference of Catholic Bishops, in which the bishops asked legislators “to work toward policies that will help those on the margins of society.”

The bill contains many ideas that the U.S. bishops have long supported, at least as general principles.

The bill also could be compatible with the church’s pro-life priorities. Senator Joe Manchin, a Democrat from West Virginia and a crucial vote needed for passage of the legislation, has stated that he would oppose the measure without the inclusion of the Hyde Amendment, which limits federal funding for abortion in almost all cases. Surprisingly, given his campaign statements on the matter, Mr. Biden has publicly stated he would sign the budget package if it includes the Hyde Amendment.

Catholic voices on both sides of the political divide should have an interest in working together to push for a comprehensive bill that reflects Catholic priorities. Some Catholics may oppose it because they do not want to give the Biden administration, and the Democrats, a victory. But that would reveal that these Catholic voices are guided more by their political alliances than the social teachings of their faith.

From a Catholic teaching viewpoint, the legislation should be measured on how it supports and protects the most vulnerable among us, not by which party supports it. The budget reconciliation bill not only passes this test, but also addresses a significant portion of the church’s social justice agenda. Given the razor-thin margins in both chambers, a unified Catholic voice may be needed to help get it over the finish line.

From a Catholic teaching viewpoint, the legislation should be measured on how it supports and protects the most vulnerable among us, not by which party supports it.

In fact, Catholic organizations, including the U.S.C.C.B., should pressure Republicans, who are currently unanimously against the bill, to support the measure in an effort to hold both parties accountable to the church’s policy positions. Just as the bishops call out the Democrats on abortion, so should they call out the Republicans on social justice issues.

This political opportunity reminds us that in politics it is unwise to burn bridges. An opponent on an issue one day can become an ally the next. It also demonstrates that the U.S. bishops’ traditional bipartisan approach to public policy is the right one.

Unfortunately, the recent controversy over whether to prevent President Biden, a Democrat, from receiving Communion has placed the U.S. bishops in danger of abandoning this bipartisan approach and being labeled, perhaps correctly, as a one-party church.

This perception would weaken the church’s influence on important issues of the day, such as the Biden spending package. The bishops (and Catholics generally) are more effective in influencing elected officials by the light of the Gospel rather than by the weaponization of the Eucharist.

This political opportunity reminds us that in politics it is unwise to burn bridges. An opponent on an issue one day can become an ally the next.

Working with President Biden and the Democrats on a bill that reflects Catholic values represents a test for the bishops and for a politically divided Catholic community. It could unleash, however, the power of a unified church and help correct the bishops’ perilous path away from bipartisanship.

The opening is there.

[Want to discuss politics with other America readers? Join our Facebook discussion group, moderated by America’s writers and editors.]