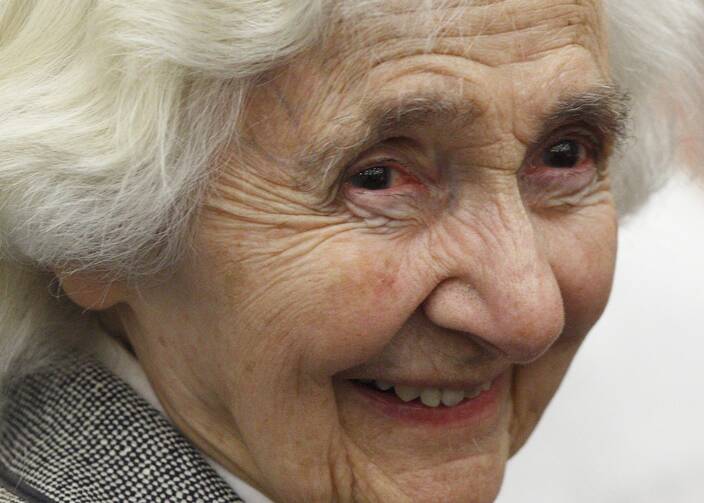 Dietrich von Hildebrand is well known as an eminent Catholic phenomenologist; he had the same teachers as St. Edith Stein, and his work in phenomenological philosophy is no less important than hers. He is also known for his groundbreaking work on marriage and for his religious writings, including his classic work Transformation in Christ. In addition, he has always been recognized as one of the strongest Catholic voices against Hitler in 1930s Europe.

But the story of this great man is not complete without the story of his remarkable wife, Alice Jourdain von Hildebrand, who died in January 2022 at the age of 98.

She did not only stand devotedly next to her famous husband; she was a real collaborator with him. She understood his thought from within. After his death in 1977, Alice devoted the rest of her life to making his philosophical and theological legacy known. She found imaginative ways of bringing his thought to audiences that he did not reach, as in the many programs she did for EWTN over the years. But she was more than a collaborator, and more than a custodian of his legacy; she spoke with a voice of her own. She and her husband formed a presence in the Catholic world not unlike that of Jacques and Raïssa Maritain.

Dietrich and Alice von Hildebrand formed a presence in the Catholic world not unlike that of Jacques and Raïssa Maritain.

Alice Jourdain von Hildebrand was born in Belgium in 1923. In 1940, she fled with her family to France ahead of the advancing German army. In the summer of 1940, her parents, fearing for the safety of their daughters, put her and her sister on a ship bound for New York. The ship was stopped by a German submarine not far from Ireland. Everyone was ordered into lifeboats and the Germans threatened to sink the ship; Alice was certain that she and her sister were about to die. But when the Germans saw that the passengers were all refugees, they allowed it to pass.

In 1942, she heard a talk in New York by Dietrich von Hildebrand on transformation in Christ. It was an encounter that opened to her a new world and a new life. Though she had been raised in a devout Catholic home, she had never heard anyone speak about life in Christ with such ardor. Many people had this encounter with von Hildebrand. I myself had it in 1966. Along with the renewal of her faith, Alice discovered her gift for philosophy. She studied with von Hildebrand at Fordham, completing her doctorate with a dissertation on St. Augustine in 1949. She wanted to teach philosophy and applied, unsuccessfully, to various Catholic colleges in the New York area. To her surprise, she found a temporary position at Hunter College in New York City.

Alice was at first reluctant to teach in a totally secular academic environment. She had always lived among Catholics and had been raised in Belgium in a refined and sheltered milieu. She had never dealt with people like the students in Hunter College in the 1940s, some of whom were rough around the edges and not exactly well-mannered. But soon she found herself drawn precisely to these students. Alice looked past all the cultural barriers that separated her from them, and she entered into their griefs and hopes. She understood her students’ spiritual hunger. She had a heart for them in all their brokenness. And they were drawn to her. Many of them turned to her with their personal needs. Many found their way to God through her teaching. And so it happened that her temporary position of a few weeks turned into a 37-year teaching career at Hunter.

She resolved never to bring her Catholic faith explicitly into the classroom. She hewed closely to the methods of philosophy. How, then, does one explain the conversions among her students? Alice put it like this: She would present the arguments of Plato and Aristotle against relativism. Her students grasped the force of these arguments. She found that for many of them it was a short and easy step from the objective validity of truth to God. It was the relativism that was keeping them from God; as soon as that obstacle was removed, faith became a live option for them. Friedrich Nietzsche would have understood well what she was doing, for he realized that whoever venerates objective truth is already a theist. This is why his atheism required him to replace the will to truth with the will to power, and this is why Alice von Hildebrand was able to undermine atheism by reviving the will to truth.

Alice von Hildebrand understood her students’ spiritual hunger. She had a heart for them in all their brokenness. And they were drawn to her.

But there is something else that explains the extraordinary resonance that she found with her students at Hunter: her rare pedagogical talents. She was gifted with a sharp Gallic wit (something that her husband did not have). This gave her a certain charm in the classroom and made her formidable in discussion and debate, even though in appearance she was slight and frail. Once, a student was trying to provoke her by saying that human beings are directly descended from the apes and differ only in degree from them. After trying in vain to respond with philosophical arguments, she resorted to her wit: “Well, if it turns out to be true, I’d accept it, but I wouldn’t brag about it.”

On another occasion, someone complained that a certain article she had written was rather weak, to which she retorted, “Well, you know, only mediocre people are always at their best.” She never used her wit to humiliate, but always to engender warmth. She combined in herself wit, wisdom and warmth in such a way as to be able to engage her students at a deep level. Even during the student unrest at Hunter in 1970, when Hunter College was officially closed, she continued to hold her classes, and her students continued to turn up for them.

But her colleagues were another story. She recounted in her 2014 autobiography, ​​Memoirs of a Happy Failure, that many of them resented her, and many of the department chairs and deans whom Alice served seemed to want to make life so miserable for her that she would leave. It may have been because of envy—none of her colleagues had anything like the student following that she had.

But most of all, it was because of her Catholicism, she wrote; the other professors said that she was proselytizing, indoctrinating her students so as to win them over for the church. Her memoir recounts episodes in which colleagues told students to avoid her classes or sent student spies into her classes to collect evidence of proselytizing. Further, Alice wrote, her colleagues at Hunter maligned her, confined her to teaching evening sessions and tried to block her tenure; she also thought it highly likely that letters favorable to her that disappeared from her personnel file were destroyed by her adversaries. (America reached out to Hunter College for comment on these allegations but received no response.)

But as I said, she was resolved not to mention the church in her classes. She responded instead with the resources of philosophy to the crisis of meaning that so many of her students were suffering. Most of her critics knew nothing of the life-giving power of authentic philosophy. They taught philosophy without attending to the sapiential dimension of it, and so they could find no other explanation for the religious awakening among her students than inappropriate proselytizing.

Her memoir recounts episodes in which colleagues told students to avoid her classes or sent student spies into her classes to collect evidence of proselytizing.

But the charge of proselytizing did not find much traction with the students. In 1984, Hunter decided to give an award for outstanding teaching. Over 800 faculty members were eligible, and the students voted: She won the award.

At the same time that Alice Jourdain was reaching out to disoriented and despairing souls at Hunter College, another great Catholic woman was at work in New York City. Dorothy Day was leading the Catholic Worker movement with its outreach to the homeless, the destitute, the hungry. She highly esteemed the writings of Dietrich von Hildebrand, whom she often quoted in the pages of The Catholic Worker,but as far as I know she did not know about Alice and her work at Hunter. But were these two Catholic women not fighting the same fight, just on different fronts? Were they not sisters in the spirit? Did not each of them, in her own way, practice a ministry to the neediest?

I have mainly spoken of Alice von Hildebrand as an inspired teacher of philosophy; but she was also an author. Particularly noteworthy are her writings on man and woman—writings such as The Privilege of Being a Woman and Man and Woman: A Divine Invention. She attempted in these books something like what St. Edith Stein attempted in her well-known papers on womanhood.

Both were both Catholic women philosophers trying to rethink the identity and role of women in response to the epochal stirring of thought about sex and gender in our time. Alice von Hildebrand wrote with perhaps more of a polemical edge than Stein did, but what she wrote is full of wisdom. She spoke with a voice that deserves to be heard today.

We Catholics should keep track of the heroes of faith in our time and should cherish their memory. Let us remember not only Dietrich von Hildebrand, but also his wife, Alice.