China and Russia are rushing to field new tanks while the US continues to operate M1 Abrams designed more than four decades ago.

According to intelligence firm Janes Information Group, the latest installment that the US is falling behind the modernization curve is China’s new lightweight battle tank has formally entered service. 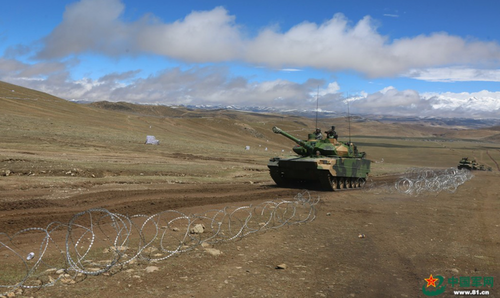 China Central Television (CCTV) said an undisclosed number of Type 15s were delivered to a PLAGF regiment in Xinjiang. CCTV broadcaster said it was “the first lightweight tank to join the military command.”

The broadcaster said the Type 15s are outfitted with special oxygen equipment to allow the tanks to operate at high altitudes.

Janes said no confirmation on how many Type 15s were deployed, but it appears these new tanks will significantly increase PLAGF’s combat capabilities in the region.

“The Type 15 tank is easy and flexible to operate and has high mobility, as it is equipped with a new engine designed for plateau missions and an oxygen producer. It also uses new armor materials and stealth technologies, so it has reduced weight but better protection and stealth functions,” Zhang Hongjun, a master sergeant class one at the regiment, told CCTV.

The new tanks are much lighter than the People’s Liberation Army’s Type 96 and Type 99 tanks, allowing it to become a rapid response ground-based weapon, with a maximum top speed of 43 mph.

The new tanks appear to be safeguarding China’s western borders. More specifically, Beijing has a significant “core interest” in the northwest Xinjiang province where it houses massive re-education camps of Uighur Muslims.

Previous post: [ The GameStop Saga Unravels 'Stakeholder Theory' ]
Next post: [ Living Off Grid As The Collapse Of Society Approaches: "Why Aren't More People Doing This?" ]