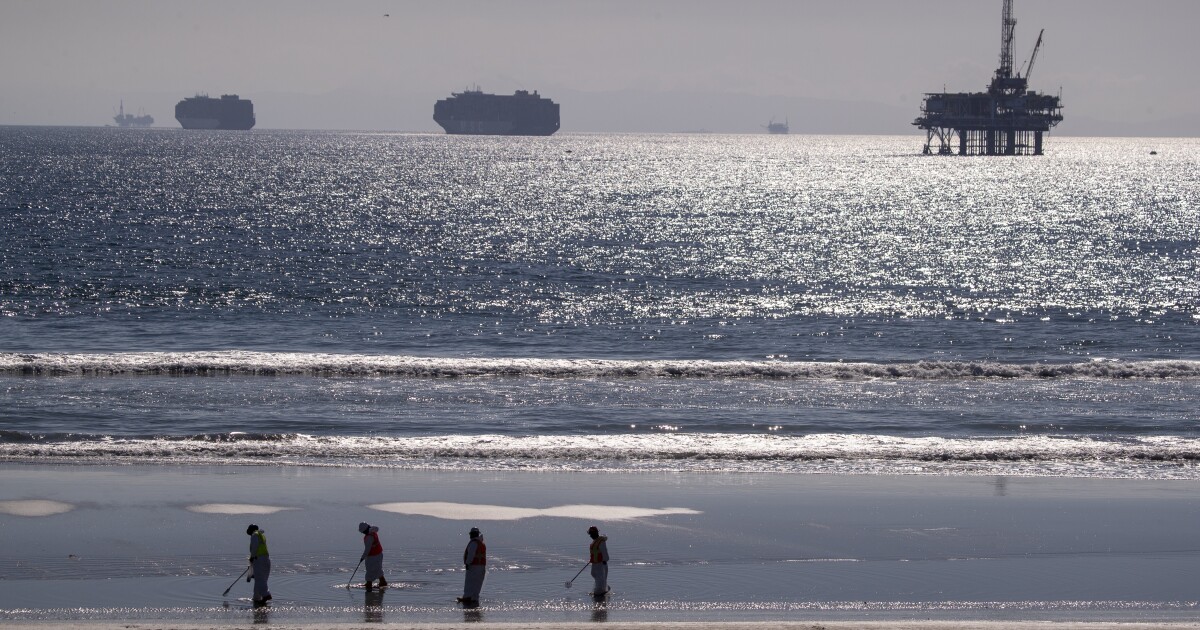 The U.S. Coast Guard investigated a vessel in Oakland on Wednesday as part of its probe into whether a ship’s anchor damaged an oil pipeline off Orange County and spilled 144,000 gallons of crude.

The container ship was in the area of the pipeline before the spill was discovered, according to a source familiar with the investigation, and later headed north. Investigators are probably looking for data showing the ship’s movements and other mechanical information.

The examination is just one part of a wider investigation into how the spill occurred last weekend, sources familiar with the investigation told The Times. The sources spoke on the condition of anonymity because they were not authorized to comment publicly.

A final determination of the spill’s cause may take months, but the probe of the ship underscores that investigators continue to zero in on a ship anchor as a possible cause. The inquiry remains in its early stages.

The shipping channels off Los Angeles and Orange counties have been jammed for months because of gridlock at the port, forcing more ships to lay down anchors near pipes that move oil from offshore platforms onto land.

Global positioning data provided to The Times show that the Rotterdam Express, a German container ship, was anchored Friday near the area of the oil spill and was in the Port of Oakland on Wednesday. A spokesman for the port confirmed the ship arrived Wednesday.

A spokesman for Hapag-Lloyd, the German firm that owns the Rotterdam Express, said the container ship was anchored in the vicinity of the oil spill, but was “pretty far away from the pipeline.”

“At the moment, we believe we are not connected to the oil spill,” spokesman Nils Haupt said by phone. He said the company would fully cooperate with investigators.

John Amos, president of Skytruth, a nonprofit organization that uses satellite technology to track environmental issues, said his firm has been analyzing data of ship movements Friday night, when the spill was first detected. Skytruth examined the location data for the Rotterdam Express over a number of days when it was anchored in the area and found it was the closest ship to the pipeline.

But Skytruth also found that the Rotterdam Express was never closer than 1,500 feet to the line, according to satellite data. Instead, the ship kept to a semicircular pattern that would be expected of an anchored ship moved by wind and current. That distance, said Amos, makes it unlikely that its anchor could be the culprit.

“I don’t think there is enough leash basically for a vessel to be anchored and be pushed around 1,500 feet,” Amos said. Maybe the Coast Guard’s investigation, he said, “will rule them out.”

He added that the actual location of the pipeline could differ from what is shown in federal mapping data. Amos said the 40-year-old line could have shifted over time, moved either by natural events or other anchor strikes that didn’t cause leaks, with the change going unnoted on official sources.

Hapag-Lloyd is aware that some marine traffic information showed that the Rotterdam Express had moved while it was anchored, but that “seems to be wrong,” Haupt said. The ship’s captain has provided logs, updated hourly, showing the ship did not leave its anchorage place for several days, he said.

The spill, which wasn’t reported by the platform owner until Saturday morning, originated from a pipeline running from the Port of Long Beach to an offshore oil platform known as Elly.

Diver reports and footage from remote-controlled submarines showed that a 4,000-foot section of a nearly 18-mile pipeline had been displaced about 105 feet and had a 13-inch split along its length, according to the joint unified command that is overseeing the investigation.

The displacement, federal sources said, is best explained by a ship’s anchor dragging across the ocean floor and hooking the pipeline. There were multiple large cargo vessels in the immediate area of the leak before the oil was spotted.

Martyn Willsher, president and chief executive of the pipeline operator’s parent, Amplify Energy Corp., described the force as pulling the pipe in an almost “semicircle.” “The pipeline has essentially been pulled like a bowstring,” he said.

With the ports of Los Angeles and Long Beach at near capacity, container ships and oil tankers have had to drop their massive, 30-ton anchors in designated sites that place them near oil platforms and an undersea infrastructure of oil lines, sewage treatment pipes and communications equipment.

Much like an air traffic control center, the Marine Exchange organizes the movement of vessels in and out of the ports. Their work begins when a ship comes within four days, or 800 miles, of the ports.

At that point, for security purposes, every commercial ship or yacht weighing more than 300 tons must submit to the Coast Guard an advance notice of arrival that reviews the vessel’s manifest.

Under normal conditions, ships are assigned an anchorage spot if a berth is not available. But in the last few months, arriving ships within 25 miles of the ports are assigned to a “drift area,” either between Catalina Island and the Palos Verdes Peninsula or off Dana Point. They then turn off their engines and drift in the current and wind, with occasional repositioning.

When there is an opening in the anchorage area, they proceed to a specific latitude and longitude, where they drop anchor. The Marine Exchange can direct them either to an area close to the Long Beach breakwater or down the coast off Huntington Beach.

Cleanup efforts have continued to ramp up. By the end of the week, officials expect to have 1,500 people helping remove oil from beaches and offshore, officials said.

The oil has been creeping slowly south in the last three days, with one slick still floating off Newport Beach and Huntington Beach and another moving off San Clemente.

More than 5,000 gallons of oil had been removed from the water as of Wednesday, but light oil remains along roughly 15 miles of shoreline. Officials deployed 11,360 feet of booms to protect the coast, according to the Coast Guard.