A body found Sunday in Wyoming is that of Gabby Petito, according to the Teton County coroner.

The coroner’s initial determination for the manner of death is homicide.

Petito, a native of Blue Point, Long Island, was reported missing on Sept. 11 after going on a cross country trip with her boyfriend Brian Laundrie.

Laundrie returned to his home in Florida on Sept. 1 without Petito and has since gone missing. Crews have searched a Florida preserve for him.

Laundrie was last seen a week ago, but his parents, who are also from Blue Point, did not report him missing until Friday. The search for him concluded for the day at around 7 p.m.

FBI Denver Special Agent in Charge Michael Schneider released a statement, saying, “The FBI and our partners remain dedicated to ensuring anyone responsible for or complicit in Ms. Petito’s death is held accountable for their actions. Mr. Brian Laundrie has been named a person of interest. Anyone with information concerning Mr. Laundrie’s role in this matter or his current whereabouts should contact the FBI.” 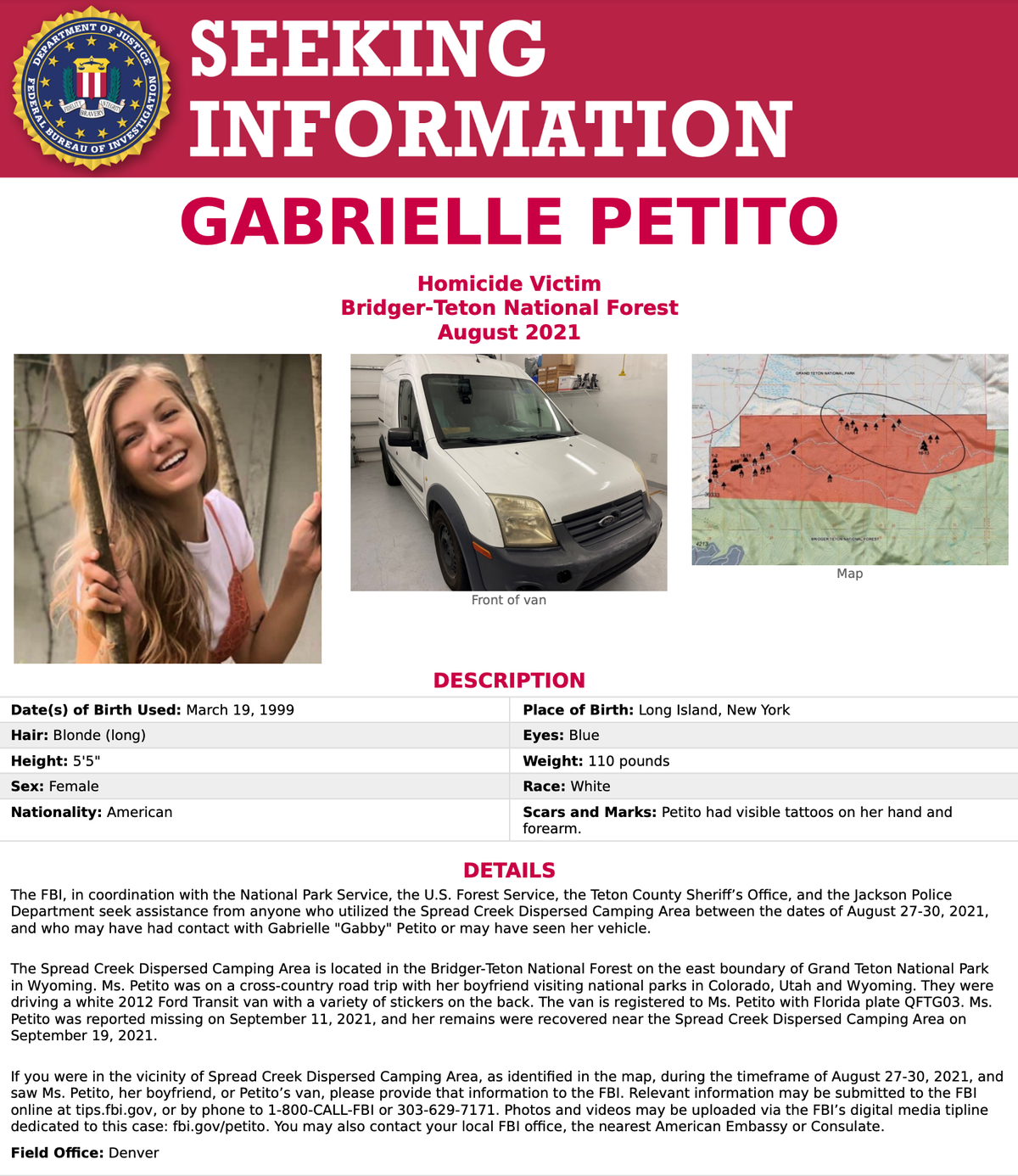 The FBI says it is now seeking information from anyone who utilized the Spread Creek Dispersed Camping Area in Wyoming’s Grand Teton National Park between the dates of Aug. 27-30, 2021, who may have had contact with Petito or Laundrie, or who may have seen their vehicle.

“There must have been something in the circumstances that led them to believe it was, in fact, a killing by another human being,” Charlow says. “That’s what a homicide would be.”

Meanwhile, a memorial has been made in North Port to remember Petito. People in the area stopped by to pay their respects to the Blue Point native.

“I heard they were putting a memorial up for sweet Gabby and I just wanted to bring something by,” says North Port resident Dianne Ruffel. “I’m sorry that this has happened to her.”

Members of the North Port community are hoping for answers and demanding justice for Petito.

“…This is just not right,” one person said. “I hope there will be some conclusion to this.”

The official cause of death remains pending final autopsy results.