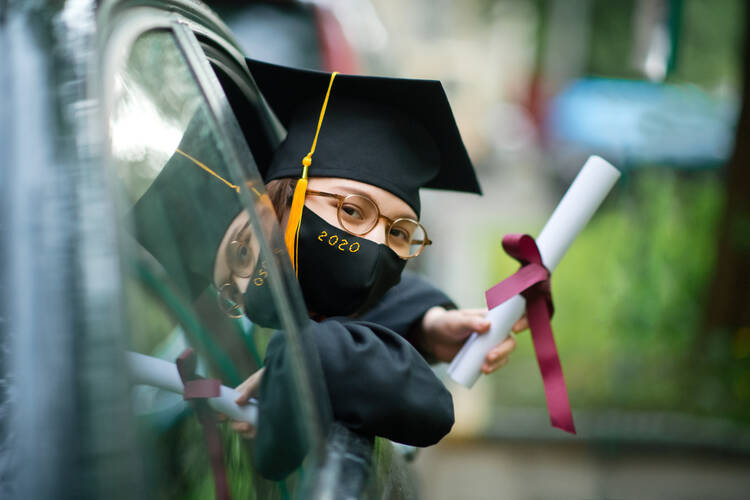 Our commencement was pushed back so many times because of Covid-19 that I was really starting to believe it would never happen. When my senior year ended abruptly in March of 2020, professors and friends said they would see me in May for graduation. As May got closer, an email told me I would be back on campus for a celebration in October. Each time things began to look promising, a new surge or variant sent our celebration further and further back into the void.

By the time the plan for an October 2021 ceremony was announced, I honestly was not even sure I wanted a graduation ceremony anymore. I had moved to a new city, started a new job and done my best to move on from the loss of all the traditional end-of-college rituals. In fact, I had landed firmly on the conclusion that my chance to walk across a stage in a cap and gown was a tiny, insignificant blip in all the suffering the Covid-19 pandemic has caused.

Still, I decided I would attend the postponed ceremony. I wanted to be excited about it, but I knew, and was told many times by others, that a belated graduation just would not be the same. That knowledge made me afraid, so I tried to protect myself. “It might be weird.” “Too much time has passed.” “I don’t really have any expectations.” These were the things I said to people who asked if I was excited to return for the weekend to a school I absolutely adored and to celebrate with some of the people I love most in the world.

Can a ritual that comes a year and a half late possibly mean what it was originally supposed to? No, it cannot. And it did not. But it ended up having a deep meaning entirely its own.

Can a ritual that comes a year and a half late possibly mean what it was originally supposed to?

No, it cannot. And it did not. But it ended up having a deep meaning entirely its own, and that is why I want to recommend that we celebrate more late rituals as we emerge from the isolation of the pandemic.

After participating in a traditional college graduation ceremony, I appreciate the importance of ritual in a way I do not think I did before. Pomp and circumstance has sometimes seemed frivolous and unnecessary to me. But my delayed graduation felt more like an intentional practice. Every hood and color and speech was painstakingly chosen for an explicit reason. We gathered with the people who were beside us through the years, acknowledging that the diploma was never an individual project but fundamentally a communal one.

Almost like a sacrament, the physical signs of the day communicated so clearly what the ceremony was designed to do. And while graduation is not a religious rite, my day was filled with all kinds of graces. I appreciated them with the kind of perspective that could only have come with the hindsight time offers us. I will tell you about a few.

As I watched my best friend and roommate of two years cross the stage, I remembered the many all-nighters she pulled in the library, the late-night belly laughs we had on our floor and the lessons I learned from her about how to treat people with kindness and decency. I also remembered the ways she has supported me and worked hard to keep in touch over the last year and a half, even in the midst of Covid scares and job transitions. To scream and cheer for her was sacred.

While graduation is not a religious rite, my day was filled with all kinds of graces.

My nana sat and watched the baccalaureate Mass and commencement ceremony for four hours. (My name was called in the very last group of students. You’re a trooper, Nana.) When I hugged her after the ceremony, I remembered the time she drank beer with me at a football tailgate senior year. I recalled the many drives she made to campus to take me out to lunch, and the amazing meal she would always have waiting on the table for me when I got home after my last final of each semester.

I also remembered how scary the pandemic has been for her at her age, how her vaccine and her mask made it possible for her to sit in a crowd that would have made her stomach churn a year ago. To feel her pride was holy.

Throughout the weekend, old friends, professors and Jesuits greeted me with a love and excitement I had somehow forgotten was such a hallmark of our campus community. It felt so much like it had when I would run into them on the quad as a student. But this time we had completely new topics to discuss. Some of them told me they had read something I had written at America and had shared it with a friend. Many told me about something they had seen or heard that reminded them of me. To know I am part of a community where so many people know me and care about me, no matter how far away I go, is a blessing.

Our diplomas had already arrived in the mail in time for our original graduation date in 2020, so my university had to think of something else to hand to us when we walked across the stage. Each graduate received a coin bearing the likeness of St. Ignatius, flanked by our class year and a reminder to “set the world aflame.” A note that accompanied the medal informed us that the inscription on the coin was a reference to a letter that St. Francis Xavier, who had left Europe in 1540 to spread the Gospel in India, wrote to his fellow Jesuits. Xavier told them he was cutting their signatures out of their letters, so he could carry them with him and always remember his friends. He wrote, “I give thanks first of all to God our Lord, and then to you…for the fact that God has so made you that I derive such consolation from bearing your names.”

I now understand that graduation is about what is to come after. It is about setting you up for the life you are going to lead in the future thanks to the education and formation you had at school.

St. Francis Xavier’s gesture to his friends touched this newfound ritual-loving part of my heart. To take such joy in your friends’ names that you want to hold them with you everywhere you go is such a beautiful sentiment, a tangible sign of the love you feel and share. (I will let you know how it goes when I ask all my friends to write me letters so I can cut out their names and walk around New York City with them in my pocket.)

If you have canceled or missed a ritual you were looking forward to because of Covid-19, my heart goes out to you. It is so difficult to reconcile two realities of the past 19 months: the fact that the suffering of the pandemic is so much bigger than you; and the wish, at the same time, that you could have celebrated an achievement, had your wedding or buried your loved one in the way you always hoped.

It is my hope, after the gift I received in my delayed graduation ceremony, that you will still find some way to make those rituals happen, whenever it is safe for you to do so with your friends and family. It probably will not feel like it would have in pre-pandemic times. But if my experience is any indication, you might get to have two distinct feelings: 1) I did the thing! (Whatever the thing may be for you.) 2) Since I did that thing, I have done so much more and grown a lot.

I now understand that graduation is about what is to come after. It is about setting you up for the life you are going to lead in the future thanks to the education and formation you had at school. While such rituals can have an air of finality, they are really about a continuation, a sending us on to what is next.

It is a rare thing to experience a graduation ritual while already knowing a little bit about who you are becoming in your post-college years. Being on campus again reminded me of how many people and experiences there I have to thank for the person I am becoming. I hope your delayed celebration of whatever you missed will give you that same bird’s eye view.

But most of all, after a year of change and a focus on suffering, I hope you will allow yourself to have one day that will be about joy. After all, what’s holier than that?