COVID vaccines: Which countries are vaccinating children over 12 and how do they compare? – Euronews 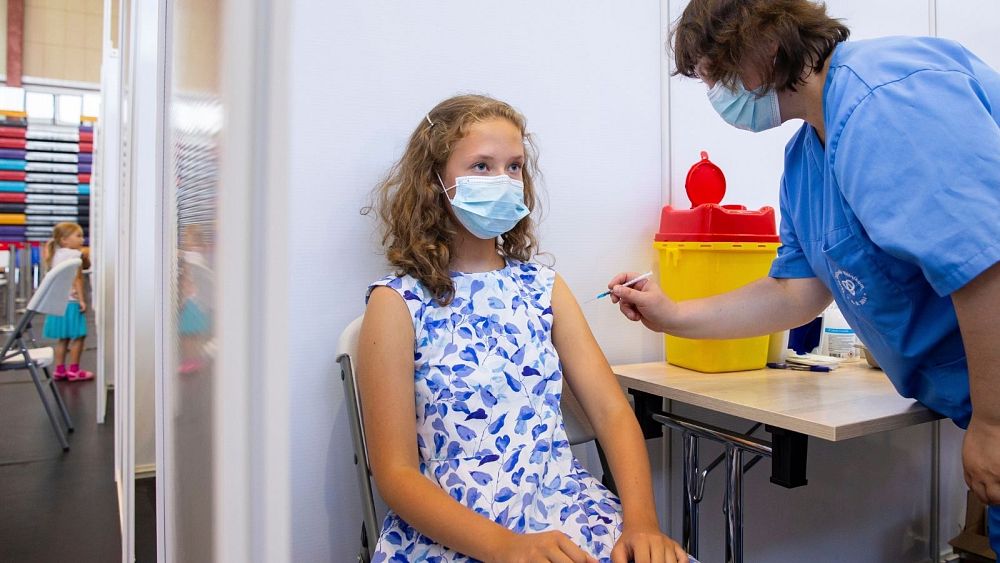 The COVID-19 vaccine race has focused on getting the elderly and medically vulnerable protected before gradually moving through the rest of the adult population.

In the latest EU figures, 75.6 per cent of the adult population in the bloc have been vaccinated and there are similar numbers for the rest of Europe. So, the question has become who next?

The goal has shifted to vaccinating as many children as possible to try and reduce the spread of infection and variants in the community.

The European Medicines Agency (EMA) approved the use of the Pfizer vaccine for children aged 12-15 in May this year, the first COVID-19 vaccine to be given such approval in the EU.

The authorisation was based on a study involving 2,259 children in the age group which showed that their immune response was comparable to those in the age 16-25 cohort.

None of the children who received the vaccine developed COVID-19, compared to 16 who did develop COVID-19 after receiving a placebo.

The EMA approved the Moderna vaccine for use in the 12-17 age group the following month. This time, a study of 3,732 children in this particular age group showed none of those who received the vaccine contracted COVID-19 compared to four in the placebo group.

Should children get a COVID vaccine?

There has been a debate over the merits of vaccinating children who do not have underlying conditions as the chances of them developing a severe illness from COVID-19 are quite low, and this has to be balanced against the potential side effects of the vaccine.

The EMA acknowledged that the limited numbers in both studies meant that they could not detect rare side effects. However, they concluded that the benefits of the vaccines for this younger age group outweighed any potential negatives.

There has also been some concern over cases of myocarditis and pericarditis following the administration of mRNA vaccines.

A Harvard article in July reported that there had been 1,000 cases after 300 million vaccinations in the US following either Pfizer or Moderna jabs. The majority of the cases were in teens or young adults.

The article also says that 79 per cent of these cases in young people were mild.

Despite vaccines having been approved for 12-18 year-olds by the European medicines regulator for the last two months, not all EU governments or health agencies have followed its lead.

However, many countries have started to open their vaccination programmes to children over the age of 12. This is how they compare.

The vaccination programme for those under 18 in the UK is just beginning to get off the ground in certain parts of the country. The four devolved governments have had slightly different approaches.

All teenagers aged 16 and 17 in England have started to be offered vaccines as of August 23, while children aged 12 to 15 who are clinically vulnerable to COVID-19 or live with adults who are at increased risk of serious illness from the virus will be invited to have a vaccine in the coming weeks.

In Northern Ireland, 16 and 17 year-olds have already been able to access the vaccine for a few weeks.

When it comes to the 12-15 age group who aren’t clinically vulnerable to COVID-19, the UK appears to be going a slightly different route to many of its European peers. The Joint Committee on Vaccination and Immunisation recommended on Friday not to vaccinate children aged 12-15. They believe that there is not enough evidence to recommend expanding the rollout to that group.

They concluded that with just two in every million healthy children needing intensive care treatment for COVID-19, the benefits of vaccination were “insufficient to support a universal offer”.

However, the committee has left the door open to ministers to go down a different route. They commented that it is not within their remit to consider wider issues such as the effect on the education sector and said that ministers can seek advice from other places.

The views of the four nations’ chief medical officers will now be taken into account, the Department of Health and Social Care (DHSC) said, and there are hopes of a UK wide policy being formed in the next week.

Italy’s goal is to vaccinate most of its teens before they return to school in September. Currently, 49.86 per cent have received one dose and 28.39 per cent are fully vaccinated according to the Italian government’s August 24 vaccine report.

Since August 16, 12-18 year-olds can get a vaccine without an appointment in a bid to increase uptake.

The Pfizer vaccine was authorised for 12 to 15 year-olds in late May, with bookings across most regions beginning in July, while the Moderna jab was approved for 12 to 17 year-olds at the beginning of August.

Initially vaccines were only recommended for children with underlying conditions, but in the wake of the spread of the Delta variant, it was decided on August 16 to offer a vaccine to all children over 12.

The STIKO committee – the expert body which advises the German government on vaccines – said in a statement that the decision came after examining new safety data, especially from the US, following the vaccination of around 10 million teens.

They said that given “the current state of knowledge, the advantages of vaccination outweigh the risk of very rare vaccine side effects”.

There have been concerns over myocarditis, the very rare heart muscle inflammation observed in connection with the vaccination, especially in vaccinated young males.

However, STIKO said that most of these people went to hospital and were successfully treated. They also underlined the general risk of COVID-19 itself to cardiac health.

Ireland has had a remarkably high vaccine uptake in the adult population.

Over 90 per cent of adults over 18 have had one dose and 84 per cent have been fully vaccinated. The vaccine campaign is still ongoing, especially in the younger cohort where it has only opened up fully in recent weeks.

The country has now started looking at vaccinating children. The portal to register a child aged 12-15 for a vaccine opened on August 11 and has had over 100,000 appointments made and over 75,000 of them were within the first 48 hours alone.

There are an estimated 248,000 children in this age cohort. In the first weekend of vaccinations, 30,000 children received a dose. The rollout is ongoing.

According to the World Health Organization (WHO), 19,008,598 people in the country have received at least one dose and 18,410,561 are fully vaccinated, which is just under half of Poland’s population.

Pfizer and Moderna have both been approved for over 12s, with the former being approved back in June. Of those aged 12-17, 685,277 people were vaccinated with at least one dose by August 16 and 577,562 people are fully vaccinated, according to the Polish health ministry.

France was one of the first countries to open vaccinations to those over 12, doing so on June 15.

More than 56 per cent of 12-17 year-olds have already received at least one dose of vaccine, according to figures released by Santé Publique France on August 19, while 32.4 per cent are fully vaccinated.

From the end of September, under 18s will be required to use the French health pass. This pass proves the holder’s vaccine status or confirms that they have been tested within the last 72 hours, and is needed to access places such as cinemas or restaurants.

While it has proved controversial, its introduction has seen an uptake in vaccinations.

According to the Spanish Health Ministry’s latest health report from August 20, 55.4 per cent of the 3.9 million 12 to 19-year-olds in Spain have already received their first dose of a COVID-19 vaccine.

The decision as to whether or not to offer the vaccine to those under 18 comes under regional authorities. As a result, different areas started offering vaccines at different times.

The Danish government breaks down its statistics differently, collating data for a larger 10-19 age group. In this group, around 58.2 per cent have received their first dose and 43.6 per cent are fully vaccinated.

The Danish Health Authority gave the green light to vaccinating children in the 12-15 age range in June, with vaccinations starting in July.

Switzerland approved the Pfizer vaccine for children over 12 in early June.

Sweden only started opening up appointments to minors in August, and then just to 16 to 18 year-olds, with all 21 healthcare regions to follow “during the coming months”.

Children aged 12 to 15 are so far only eligible under special conditions, such as belonging to a high-risk group or living with vulnerable people.