Home  »  News   »   Creator Of The Bond VIX: The Coming "Monetary Hurricane" Is A White Swan

Creator Of The Bond VIX: The Coming “Monetary Hurricane” Is A White Swan

By Harley Bassman, creator of the MOVE index, aka the “VIX for bonds” 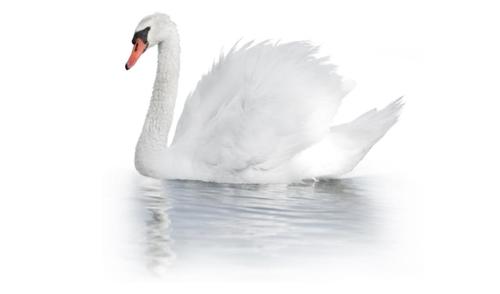 Much is written about the Black Swan, famously described by Nassim Taleb in his 2001 book, Fooled by Randomness, and smartly summarized by Malcolm Gladwell in The New Yorker’s April 22, 2002 publication.

As a reminder, the Black Swan is a metaphor that describes an event that comes as a surprise, has a major impact on markets or society, and is often considered painfully obvious with the benefit of hindsight.

This begs the question of why we often ignore, to our detriment, the more commonplace White Swan. Daniel Kahneman won the 2002 Nobel Prize in economics for shining a bright light on how cognitive bias leads to poor decision making. Seemingly by nature, people overly worry about low probability events and diminish their concern for truly risky behaviors. For example, many people are terrified of being bitten by a shark or struck by lightning, but then hop into a taxi and fail to snap on their seat belt.

As the calendar rolled into 2020, the MOVE Index was under 50 while the more widely watched VIX Equity volatility index was kissing 12. There are no reasonable statistics to comprehend such levels, they are just too low. And of course, my in-box was bulging with investors wanting me to reveal the next “surprise” that would shock the market out of its doldrums. I could only reply that if I knew, it would (by definition) not be a surprise.

Notwithstanding that Bill Gates offered a TED Talk in 2014 on the risk of a Global pandemic, and that a dozen such science fiction movies were available on Netflix, indeed COVID-19 was a Black Swan surprise. What is no longer a surprise is the Government’s proposed Monetary and Fiscal solutions to the havoc that COVID has wreaked. 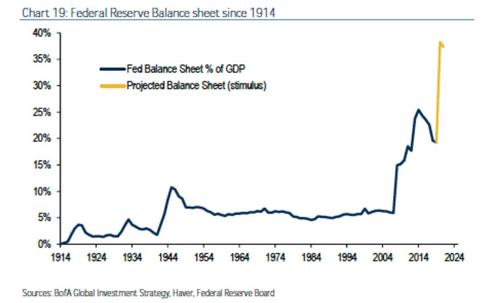 At this stage, discussing the merits of the Fed’s policies is pointless; it’s an activity best held in states where weed is legal. As pictured on the prior page, there seems to be no level of balance sheet expansion that is too high.

Not only is the FED employing QE (Quantitative Easing) to dampen an interest rate increase that would be extremely bothersome to our vastly over-leveraged economy, but they have signaled they will fund the expansion of Fiscal spending. 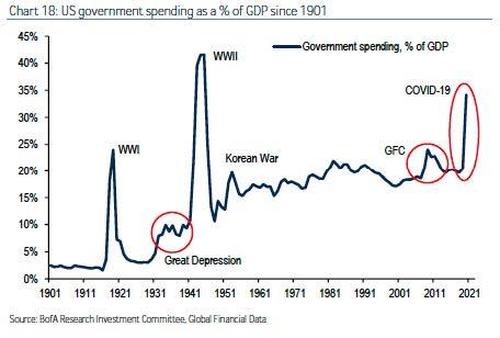 Again, a debate about whether this is good public policy is moot; a huge Fiscal impulse is coming, and it will be funded mostly by debt issued to the FED.

Economic purists will insist that this is not “money printing” since the US Treasury is independently selling bonds into the market via public auctions. Many of these bonds are purchased by Wall Street ‘primary dealers’ (sometimes referred to as Vampire Squids) who soon sell them to the FED for a small profit. Of course, this is “money printing” in the same way that one “borrows” beer at a Super Bowl party.

As a reminder, notwithstanding COVID, the financial road we are traveling has been paved with good intentions, especially by the FED; the pity is the expected result did not occur.

The GFC in 2008/09 revealed that the US had too much debt, both public as well as private. The FED recognized that there are only two ways out of a debt crisis – either default or inflate, with the caveat that inflation is simply a slow-motion default. 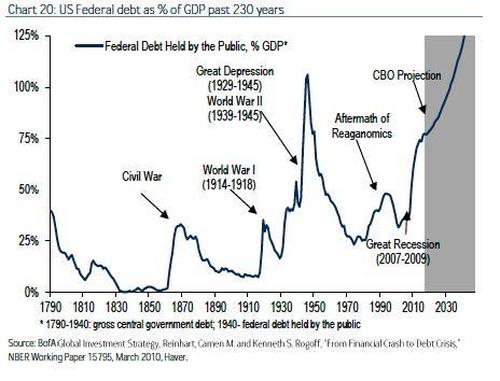 Since the market would not allow the FED to reduce its balance sheet via asset sales (or even the slow bleed of letting bonds  mature), the alternate solution was to create inflation as a way to reduce the value of debt. This policy was reinforced by the FED’s most recent communications where they indicated they would not mind inflation rising above their 2.0% target (for a short time).

The original plan was for the FED’s largess to inflate middle class wages; instead, the inflation occurred in assets, most notably in Global Equities. 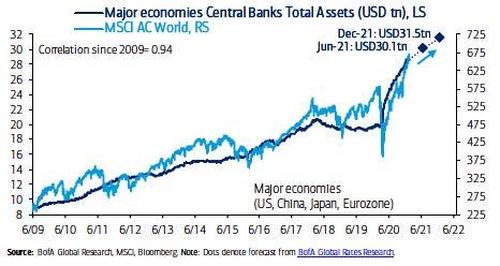 When one hears hoof beats, look for horses not zebras. There is no reason to ruminate over exotic possibilities when the problems we face are quite clear. Once again, ignore the merits of the public policy response – what is important is that there is wide support from both the Democrats and Republicans to offer significant Fiscal relief supported by massive Monetary expansion.

Will this be inflationary – Yes; but it is unclear how soon.
I made the case in my December 2, 2020 commentary, ”The Wages of Fear”, that demographics will set ablaze the dry kindling of printed money sometime between 2023 to 2025; and nothing has occurred to change that prediction. What is clear is that a financial bubble is being inflated, and there is risk on both sides of the distribution. Ordinarily the bloviating pundits advise one to sell assets, or perhaps execute some sort of hedge such as buying puts or selling covered calls. They are looking in the wrong direction.

While I am not a stomping bull, the approaching monetary hurricane could well make the “surprise” a further rally in equities. Printed money should elevate stocks; either via a continued flow into assets, or into the pockets of consumers who will spend it and thus increase corporate profits. (Yes, higher taxes could be an offset, but let’s save that for another Commentary.)
As noted, inflation is an eventual certainty, so one should own real assets; and over the longest run stocks will hold their real value. Notwithstanding the Robinhood day traders, stock equity is an ownership right in a real company. Weimar Germany is the nightmare scenario for inflation; but contrary to expectations, stockholders were protected. While the German Papiermark vs. USD exchange rate exploded (4.2 Trillion per USD), the German Stock Index, currency adjusted into USD, held its value. As such, when faced with nominal inflation – Do not sell call options.

The IVol for an at-the-money option of 23.0% is not unreasonable since SPY realized such a volatility as late as last September when the market stabilized near 350. Similarly, an IVol of 31% is not crazy for a strike of 300 since SPY had such a volatility when it was near that level last June. 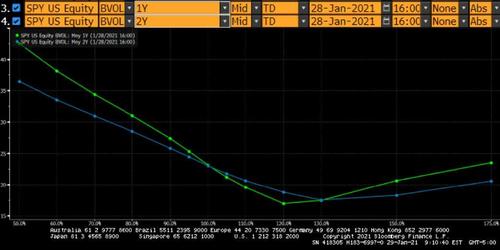 The blue line profiles the skew for options that expire in two years with Ivols of 28.50%, 23.0%, and 18.75% respectively for similar strike levels.

Consider the results of the table above for two-year expiry options on SPY; is the risk of reaching the COVID lows (-36%) the same as a 20% rally by 2023 ? (Call px = Put px) I will not quibble with the put price as it offers “earthquake” insurance; but within the context of current events, the call price is too cheap.

By many measures the S&P 500 is expensive; in fact, the loudest pundits cite that we are in a “bubble”. I will submit those indicators are not false, but they ignore that the Fed’s lips are tightly wrapped around a larger financial balloon. The chart below maps the relative value of US equities to real interest rates; this is what supports my view that stocks are “fair”. However, if $1.9 Trillion of fiscal stimulus is funded by the Fed holding real interest rates below zero, the surprise will be north. As such, I want to be long the distant strike call options; not because I know I am right, but rather it is so inexpensive to be wrong. 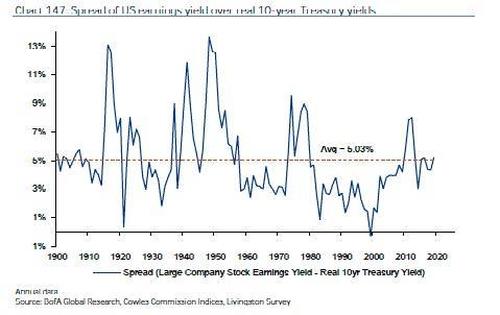